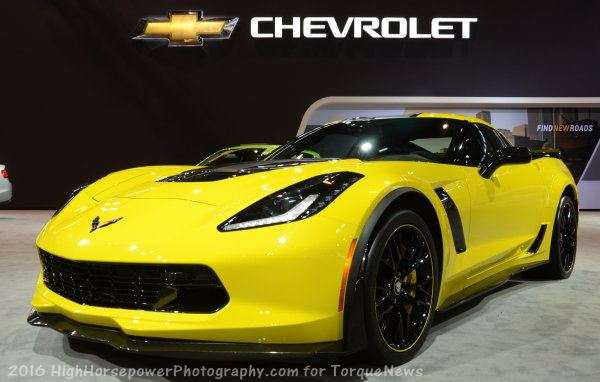 The Chevrolet Corvette has seen its slowest start to the year, down 20% through April 2016, but even with this slight downturn in sales, C7 Corvette is still comfortably outselling the top competitors from Lexus and Porsche – selling more units than the Lexus RC and all of the Porsche cars combined.
Advertisement

When you look at the sales figures for the Chevrolet Corvette over the first four months of 2016 compared to 2014 or 2015, you will find that this January, February, March and April have each been the worst in terms of sales during the C7 generation. With just 9,512 Corvettes sold during the first four months of the year, the sporty Chevy is down by 20.6%, but when you look at the closest competitors to the Corvette in the US market – things really don’t look so bad for the Stingray and the Z06.

Key Corvette Competitors in 2016
During the 2015 calendar year, the Chevrolet Corvette was the 4th bestselling premium performance car, trailing only the Ford Mustang, the Chevrolet Camaro and the Dodge Challenger. The closest competitors in the premium performance car segment in 2015 were the Lexus RC, the Porsche 911 and the Porsche Boxster/Cayman, so it serves as a fair comparison to look at the sales figures for these vehicles when evaluating the success of the Corvette.

In April 2016, the Porsche 911 was the next most popular premium performance sports car in the US with 1,023 units, followed by the Lexus RC at 813 units and the Porsche Boxster/Cayman at 673 units. If you add all of those up and even go ahead and throw in the Porsche Panamera for good measure, you get a total of 2,880 units sold in April. Chevrolet sold 3,142 Corvette coupes and convertibles last month, so even while sales are at a recent low point, America’s first true sports car was still by far the most popular in April.

On the year, the Corvette has moved 9,512 units this year, down 20.6% compared to the first four months last year. The Lexus RC is second in premium sports car sales with 3,682 units sold (down 13.5), the Porsche 911 is third with 3,182 units sold (down 6.9%) and the Boxster/Cayman have combined for 2,167 vehicles sold this year (up 7.8%). So, while the Corvette is down by a larger percentage than the competitors, the premium performance car segment as a whole is down this year and in the end – Chevrolet has still sold more Corvettes this year than Porsche has sold cars (not including the Porsche SUVs, of course).

While the folks at General Motors aren’t happy to see the Corvette sales numbers reach a low-point for the C7 generation, the fact that the Stingray and Z06 combine to very comfortably outsell the closest competitors in their segment combined leaves little question as to which car dominates the American premium sports car segment.

FactChecker90803 wrote on May 4, 2016 - 6:06pm Permalink
Corvette needs an engine realignment, GM needs to update the LT1 with dual injection that is port and direct injecrion, with a corospondent increase in compression ratio to around 13.5 to 1. The base corvette should have a 5.3L (327) 500Hp, the Grand Sport a 6.3L (383) 600Hp, the ZO6 C7R normally aspirated 7.0L (427) 700 Hp and the ZO6 Supercharged 6.3L (383) 850Hp+. If any of you believe this to be outlandish, just look at what Katech, Lingenfelter, and Yenko are accomplishing with the current LT1. And many here will say this will hurt the corvettes average fuel consumption rating and affect Chevrolets fuel average, I say make Corvette a stand alone brand, corvette needs to be stand alone, so that it cane be sold through Cadillac, Buick, Holden, and Opel dealerships overseas.
Steve wrote on May 5, 2016 - 1:54pm Permalink
Interesting point, I honestly don't believe buyers are holding out due to a lack of performance, the C7 is by far the most capable Corvette ever produced. Fact is the small block chevy has reached it's pinnacle, it can at this point barely be kept cool in either the Camaro or Corvette. This is the last hurrah for the small block Chevy, I suppose they may keep a version around for a while, no GM plans to replace the venerable engine with a twin turbo 4.0L V8, a move I hope Ford matches, the V6 EB's are awesome but please give me back the sound of a V8!
FactChecker90803 wrote on May 5, 2016 - 4:25pm Permalink
The twin turbo V8, will not succeed the small blob in the VETTE, unless the height of the Hood is raised significantly, the twin cam V8 is just too high to clear the hood height.
FactChecker90803 wrote on May 5, 2016 - 4:36pm Permalink
The Turbo 4.0L V8, will not fit in the same space as the small block V8, the height of the heads is significantly higher. The only way such event would occur is if the next generation front engine Corvette, received an increase in the height of its hood.

For Some Former Daimler Managers Daimler Is Authority, While Tesla Is Like a Startup
How Daimler Unintentionally Subsidizes Tesla Giga Berlin
END_OF_DOCUMENT_TOKEN_TO_BE_REPLACED