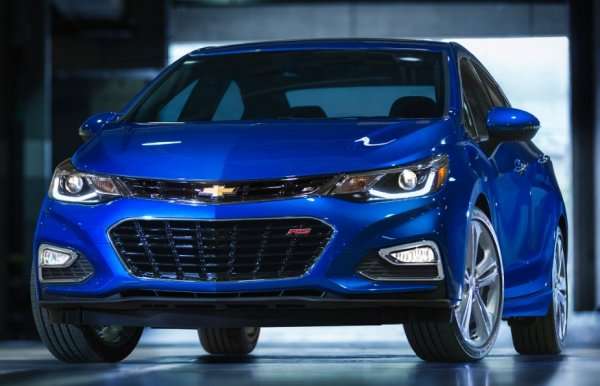 General Motors has used the 2015 LA Auto Show as the backdrop to announce the pricing for the all-new 2016 Chevrolet Cruze and with a base price starting at just $17,495 including destination, the new Chevy compact sedan undercuts literally every comparable sedan sold in America but two.
Advertisement

The Chevrolet Cruze was the 12th bestselling vehicle in the US market in 2013 and 2014, and aside from the Silverado truck lineup, the Cruze is General Motors’ bestselling vehicle. The Cruze has been a hot seller since it replaced the Chevy Cobalt back in 2011 so it should go without saying that for GM, the roll out an all-new Cruze is a pretty big deal.

When we learned that the 2016 Chevrolet Cruze would be lighter, more powerful, more efficient and roomier than the outgoing models, while also introducing new technology – both standard and optional – it was clear that the new Cruze would continue to be a major player in the US compact sedan segment. With the announcement of the official pricing, General Motors is clearly looking to make the small Chevy the top dog in the very popular segment.

The base model 2016 Chevy Cruze L comes with the new standard 1.4L turbocharged 4-cylinder engine which will pack more than 150 horsepower and still offer 40 miles per gallon in some configurations. The MyLink infotainment system with a 7 inch screen is also standard on this base model car and the price, with destination, begins at just $17,495. When you step up to the more well-appointed Cruze LS with the manual transmission, the price rises to $18,995 while the Cruze LS with the automatic transmission starts a grand higher, at $19,995. Those who want to go for the Cruse LT with the standard automatic will pay $21,995 and the top of the line Cruze Premier starts at $23,995.

2016 Cruze VS the Competition
General Motors included a brief table comparing the 2016 Chevrolet Cruze based pricing to three chief competitors – the 2016 Toyota Tacoma L, the 2016 Honda Civic LX and the 2016 Hyundai Elantra SE – and as you might expect, the Cruze costs less than each of those popular models. I went a bit further, checking the pricing of all of the other major players in the compact sedan segment and it turns out that in base form, the 2016 Cruze is also less expensive than the Ford Focus S and the Dodge Dart SE, while costing slightly more than the base model Nissan Sentra S and the Kia Forte LX. I also looked at the premium trim packages for each of the cars mentioned above and while the Chevy Cruze Premier is less expensive than the Ford Focus Titanium, the Dodge Dart Limited and the Honda Civic Touring while the Corolla S Premium, the Elantra Limited, the Sentra SL and the Kia Forte EX all have lower starting prices than the top of the line 2016 Cruze.

Of course, there are all sorts of variables which can make these prices more or less of a value from model to model, but for those folks who go shopping with a tight budget in mind – the Chevy Cruze will get people in the door simply with one of the lowest starting prices in the market.

Note: I have not included the Subaru Impreza, as the standard all-wheel drive causes the base price to be much higher than any of these front-drive models.