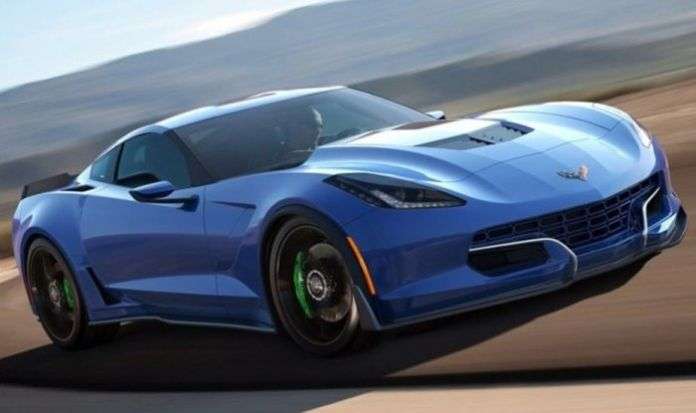 After talking about the all-electric Genovation Corvette GXE for the past few years, the production version will finally make its grand debut next month at the Las Vegas Consumer Electronics Show – with more horsepower and torque than the test car that has set several EV performance records.
Advertisement

Over the past two years, we have talked about the Genovation Extreme Electric (GXE) several times, as this all-electric Corvette has set a few different records for the electric vehicle world. In addition to hitting a top speed of 209 miles per hour, the GXE Corvette test car set the record for the fastest EV in a mile-long standing sprint – hitting 190 miles per hour. Click here for a look at the video of that record run.

Best of all, in addition to finally showing the world the production version of the GXE, Genovation has squeezed even more power out of their twin-motor setup – packing a total output of 800 horsepower and 700lb-ft of torque.

The Genovation GXE Corvette
When Genovation set the world record for EV top speed and the standing mile record, they did so with their black Corvette Z06 test car. That car is based on the C6 generation and the twin-motor setup delivered 650 horsepower and 600lb-ft of torque. That car hit 209 miles per hour overall while reaching 190 miles per hour in a standing mile-long sprint.

The production version of the Genovation Corvette GXE will have the same twin-motor setup, but the output has been increased to 800 horsepower and 700lb-ft of torque. That monster electric drive setup will be mounted in a C7 Corvette Grand Sport and as expected, the most unique aspect of this all-electric supercar is the available manual transmission. The GXE will come standard with an automatic transmission, but the combination of the high performance electric motors and the manual transmission will definitely make this the most exciting EV to drive in the world.

The fact that the Genovation Corvette GXE comes with traditional transmission options is one of the reasons why it is so much faster in terms of top speed, but with the extra power and the improved aerodynamics of the C7 body – the production version should be even faster than the C6 test car. With an extra 150hp and 100lb-ft of torque, Genovation expects a top speed over 220 miles per hour, while being able to dash from a stop to 60mph in under 3 seconds.

Also, in addition to the unique all-electric drivetrain, the Genovation GXE will have four round taillights across the back end, similar to the design of the C6 Corvette. When the C7 was introduced, the switch to rectangular taillights proved to be a controversial move, but with the all-electric, 200mph+ Genovation Corvette – we get to see the return of the quad round taillights to the C7.

Genovation will only build 75 examples of their C7 Corvette Grand Sport-based GXE electric supercar, but with an MSRP of $750,000 – the company isn’t likely to have 75 buyers lined up to buy one. A $750k price tag makes the GXE far too expensive for the average EV enthusiast, but perhaps celebrities around the US and some wealthy folks from China will lay out that money for the world’s fastest EV.