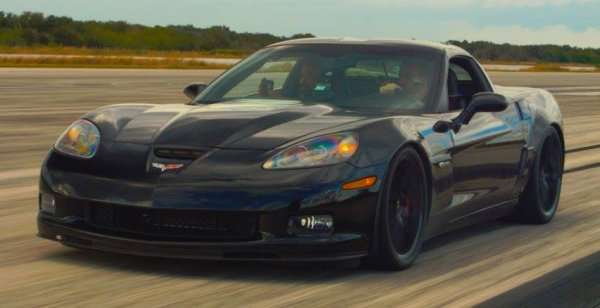 The folks at Genovation recently headed back to the track with their all-electric Corvette GXE and this time out, they were able to beat their previous record of 205.6 miles per hour- hitting a whopping 209mph and setting a new record for the world’s fastest street-legal EV.
Advertisement

Last year, we talked about the Genovation-built Corvette GXE, which used all-electric power to reach an official top speed of 205.6 mile per hour, setting the world record for the fastest street legal production car. The team at Genovation recently took their all-electric to the Johnny Bohmer Proving Grounds located at Space Florida’s Shuttle Landing Facility in Florida with the hopes of breaking their own world record – and they did just that.

A 209mph Electric Car
While the instant torque delivery of a modern electric drivetrain allows cars like the Tesla Model S to be very quick in terms of low end acceleration, the single-speed transmission systems lead to relatively low top speeds. The Genovation Corvette GXE is offered with the buyer’s choice of either a 7-speed manual transmission or an 8-speed automatic transmission, which when coupled with the 650 horsepower electric powerplant and fitted into a C6 Corvette Z06 created the first street-legal electric vehicle to break the 200 mile per hour barrier.

The Corvette GXE in the video below is fitted with the 7-speed manual transmission and when given plenty of open driving room in a closed, safe environment, reached a top speed of 205.6 miles per hour last year. This time, the team from Genovation was able to squeeze out a little more, reaching a top speed of exactly 209 miles per hour.

The video below shows the Genovation GXE making this historic run, setting the new record for the world’s quickest road-driven electric vehicle.

You Can Buy a Corvette GXE for $750k
If you are smitten with the performance levels of the Corvette GXE and you have three-quarters of a million dollars to spend on a new electric supercar – you can purchase one of these beasts from Genovation for just $750,000. The company announced last year that they plan to build 75 examples of their electric Vette, but interested buyers will need to put down a $250,000 deposit with the understanding that they will not get their car until sometime in late 2019. It should be noted that the GXE planned for delivery will be based on the newer C7 Corvette. Click here for more on purchasing the Corvette GXE.

That is a long wait and a whole lot of money for a 650 horsepower Corvette, but for those diehard electric vehicle fans who have deep pockets and the overwhelming desire to drive an EV which will go 209 miles per hour – your dream car is only $750,000 away!

Really, while that price seems ridiculous to most people, Genovation is at the forefront of the next step in EV technology. Right now, building an EV which can be driven on the street with a possible top speed of 209 miles per hour has a very high price, but with advancements in electric propulsion technology by companies like Genovation – that price will eventually come down.

Panasonic Updates Profit Forecast, Noting How Much Tesla Batteries Help The Jump
2022 Porsche 911 GT3 Laps Nurburgring in 7:04 With Journalist Behind The Wheel
END_OF_DOCUMENT_TOKEN_TO_BE_REPLACED