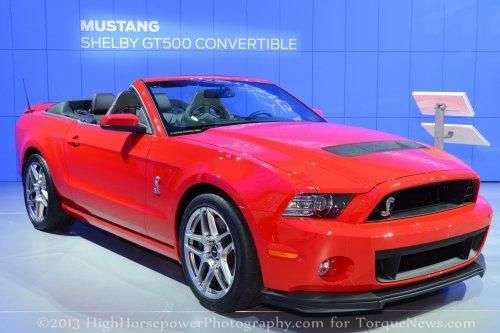 The pricing for the entire 2014 Ford Mustang lineup has arrived on the Ford website and while all of the V6 models carry the same price for the 2014 model year as they did for 2013 – all of the 2014 Mustangs powered by a V8 engine will cost you more than the 2013 model year GT and GT500.
Advertisement

These prices for the 2014 Ford Mustang include the 5.0L V8 with 420 horsepower and a 6-speed manual transmission while the 2013 Camaro SS prices include the 426 horsepower, 6.2L V8 and its own 6-speed manual transmission. Those who want an automatic transmission in the new Mustang will pay $1,195 more across the entire GT lineup – be it Coupe or Convertible, Base or Premium – but unlike the Camaro SS models with the automatic, the self shifting Mustangs don’t get a drop in power.

The four basic 2014 Ford Mustang models powered by the 3.7L V6 all have the same price as the 2013 model year beginning with the V6 Base Coupe at just $22,995. This is the least expensive option of the muscle car class comprised of the Mustang, the Chevrolet Camaro and the Dodge Challenger.

Again, the Chevrolet website is not yet showing the prices for the 2014 Camaro but unless General Motors drops the prices on every single Camaro trimline – the 2014 Mustang will continue to be the bargain buy of the American muscle car class. However, price increases without any significant changes could hurt Ford’s chances of claiming the muscle car sales title for 2013 and if they do not win, GM will claim the title for an impressive 4th straight year.

Tre Deuce wrote on March 16, 2013 - 2:44pm Permalink
Who wants an old design? Ford probably raised the price of the GT to hinder sales of an engine that doesn't help the corporate average mileage. Everybody who is inclined to buy a Mustang, is waiting for the 2015 anyway, then Mustang might unseat the Camaro as sales leader. I would bet on it. The only 'Muscle' car here, is the 6.2L SS Camaro, and technically, it isn't either, but they are all 'Pony' cars. Reg; "2014 Mustang will continue to be the bargain buy" If you think and old design and no IRS is a bargain. By the way, this having to input two 'CAPTCHA's is a pain in the ass.

LG's New EV Battery Plant Is a Welcome News for Tesla
Tesla Giga Berlin's New Hurdle: It's Not Only the Gov't, but Now Tesla Itself
END_OF_DOCUMENT_TOKEN_TO_BE_REPLACED