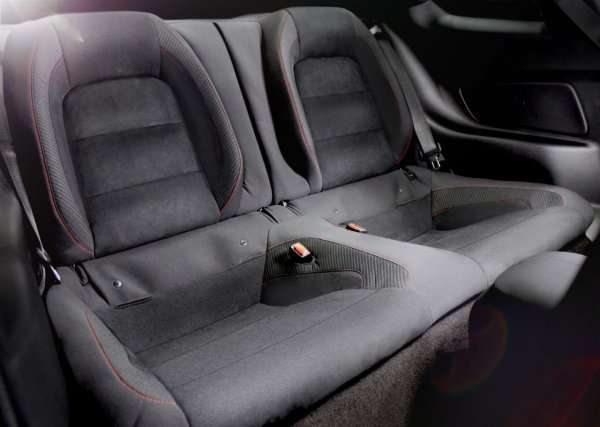 The 2015 and 2016 Ford Shelby GT350R Mustang was designed to be a pure track car that you could, in theory, drive on the street. Thanks to the adjustable suspension setup, the “R” package allows you to adjust the ride stiffness for a bit more comfort on the street, but this track model does away with some features in order to improve performance through weight reduction. Most notably, the rear seat is removed, but according to Ford, they have gotten a great many requests from buyers of the GT350R who want a rear seat.

Ford has responded, by offering up a rear seat package for the 2016 Shelby GT350R Mustang, which adds $999 to the bottom line. Yes, it seems odd that someone would want a rear seat in a track car, but this shows that the people buying these cars aren’t just using them for track day.

Weight Reduction Undone
The newest Shelby Mustang is offered in two flavors – the “regular” GT350 and the more track-focused GT350R. They share the same 5.2L flat plane V8 and when the GT350 is fitted with the Track Package, both Mustangs have the same MagnaRide dampers. They both also have the high tech, floating brake rotor design under huge Brembo calipers.

Where the GT350R differs starts with the carbon fiber wheels wrapped in Michelin Pilot Sport Cup 2 tires which are joined by a few carbon fiber aero bits around the outside. Finally, the GT350R cuts a bunch of weight by removing the air conditioning, the floor mats, the tire inflator kit, the entire audio system and the rear seat. Ford does offer a Technology Package for the GT350R, which adds in an infotainment system with navigation and a seven speaker sound system.

However, there was not an option for a rear seat package in the GT350R, and while some wannabe purists will gripe about putting a back seat in this car, it makes perfect sense. Even if the owner of the GT350R is spending tons of time at the road course, there is a good chance that he or she is driving to and from the track. What if they want to take their spouse and kid, or their kid and a friend for a day at the track? Having a rear seat that you can pop out when you get to the track is a whole lot more convenient than having to take a second vehicle before you have two passengers for the ride.

The GT350R rear seat package comes with the rear seat setup, wrapped in the same black Alcantara with red trim as the Recaro front buckets, as well as the seat belts and the hardware for everything.