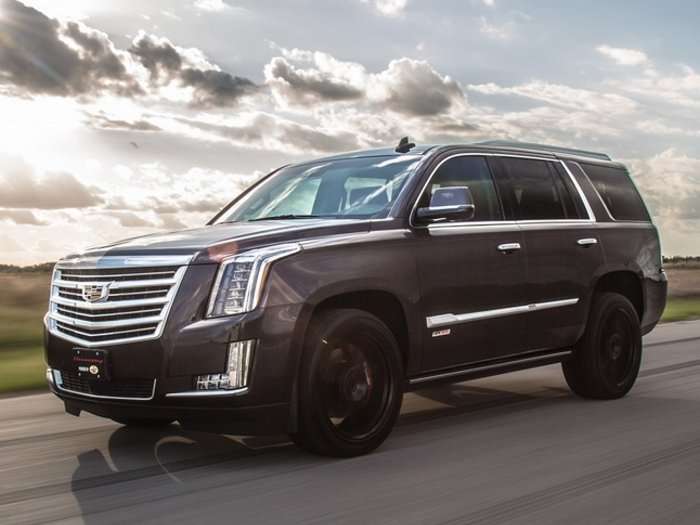 To show off their 800-horsepower supercharged upgrade package for the Cadillac Escalade, the folks at Hennessey Performance lined the blown SUV up with a new Chevrolet Camaro ZL1 1LE, with the all-wheel-drive family hauler beating the road course-ruling muscle car.
Advertisement

In stock form, the 2018 Cadillac Escalade offers solid performance, with the 6.2-liter V8 delivering 420 horsepower and 460lb-ft of torque, with that power being sent to all four wheels via the new 10-speed automatic transmission and an advanced all-wheel drive system. While it is quick for a 5,900-pound sport utility vehicle, the stock Escalade wouldn’t stand a chance against the 2018 Chevrolet Camaro ZL1 1LE, but with some help from Hennessey, this boosted SUV knocks off GM’s super-muscle car.

The Hennessey Escalade
The 2018 Cadillac Escalade in the video above is equipped with Hennessey’s HPE800 Supercharged Upgrade. This package begins by removing the engine and stroking it to 416 cubic inches, adding a forged bottom end, ported cylinder heads, long-tube headers, a 2.9-liter supercharger delivering 10 pounds of boost, an air to water intercooler and all of the supporting modifications needed to make this stroked and blown SUV make monster power.

HPE800 Escalade Vs the Camaro ZL1
In the video below, the Hennessey-built Cadillac Escalade is taking on a new Camaro ZL1 1LE. A car similar to this one turned in the fastest lap by an American muscle car on the Nurburgring, thanks to the extreme aerodynamics package and the supercharged LT4, with 650 horsepower and 650lb-ft of torque. Of course, the Camaro weighs more than a ton less than the Escalade, but with less power, less torque and less traction, would that weight advantage help?

It doesn’t help enough until the race is over, as the all-wheel drive of the Escalade allows it to jump away from the line much more quickly than the Camaro. On the unprepped starting line, the Camaro driver has to ease out of the hole, allowing the Caddy to get a huge lead early in the race.

The ZL1 1LE is gaining quickly on the big end, but it doesn’t catch up quickly enough as the 800 horsepower Escalade gets to the finish line first. Of course, if the Camaro had stickier tires, the driver would be able to launch a whole lot harder and without the early lead, the supercharged Caddy wouldn’t stand a chance, but in a race between the boosted SUV and the stock muscle car on the slick pavement – the Hennessey-built Escalade covers the quarter mile first.