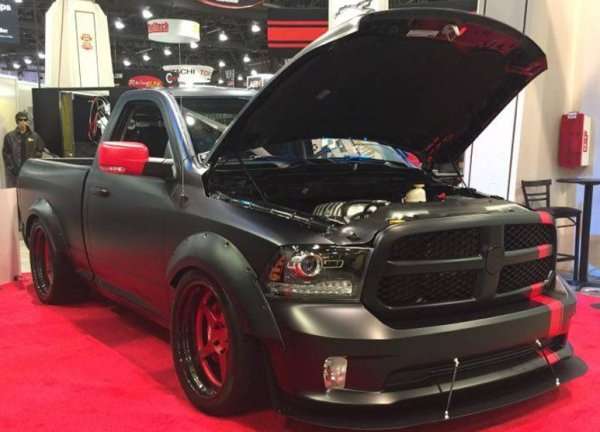 The Ram Brand introduced a Hellcat-powered Ram Rebel last month, but the “Hellfire” Ram 1500 from the 2016 SEMA Show is the supercharged Ram truck that we really want – looking like the perfect modern day replacement for the Dodge Ram 1500 SRT10.
Advertisement

The Hellfire Ram 1500 has been built by the crew at the Dallas Speed Shop under the guidance of director Mike White. As you can clearly see from this image, this Hellcat Ram has been built for superior performance on paved surfaces, unlike the Ram Rebel TRX Concept which was built to conquer the dirt at high speed. Basically, where the Ram Rebel TRX Concept was designed to battle the Ford Raptor, the Hellfire Ram 1500 from the Dallas Speed Shop is designed to battle the Ford F150 Lightning – and every other vehicle at the drag strip.

The Dallas Speed Shop Hellfire Ram 1500
As the name might suggest, the heart of the Hellfire Ram 1500 is the Hellcat Hemi V8 tucked into the engine bay of this menacing looking half ton pickup. The Dallas Speed Shop crew started with a new Ram 1500 R/T with the short bed, short car, rear wheel drive configuration, but they removed the 5.7L Hemi and replaced it with the 6.2L supercharged Hellcat Hemi.

In stock form in the Challenger or Charger, the Hellcat Hemi packs 707 horsepower, but the blown Hemi in the Hellfire Ram 1500 has been fitted with a set of headers and a full exhaust system from Kooks, which when tuned with help from Diablosport, created a final output of 775 horsepower. Figure that the lightest standard Ram 1500 with the Pentastar V6, rear wheel drive, the regular cab and the short bed weighs around 4,600lbs. The Hellcat weighs more than the V6, but even with the supercharged engine and the aftermarket performance bits, this truck likely weighs well under 5,000lbs – and it has 775 horsepower.

In other words – the Dallas Speed Shop Hellfire Ram 1500 should be crazy fast, whether you are racing on the drag strip, a high speed airstrip and even a road course.

Speaking of the road course, Dallas Speed Shop didn’t stop at just adding a ton of power to their Ram 1500 R/T project truck. They also added a lowered suspension setup and an incredible braking package, featuring Rotora carbon ceramic rotors under 8-piston calipers up front and 4-piston calipers out back – all of which is tucked under bright red 22 inch Forgeline wheels wrapped in sticky Continental tires.

Finally, this beautiful Ram 1500 sport truck has been fitted with a custom carbon fiber front splitter, a set of carbon fiber canards and those awesome wheel flares. DSS painted the entire truck satin black with a red stripe running down the body, making this the coolest truck at the SEMA Show in my opinion.

Back in the mid-2000s, Dodge offered the Ram 1500 SRT10 with the V10 Viper engine and 500 horsepower. That truck was proven to be the best performing road truck ever, but if the Ram brand could build a truck like this with the Hellcat Hemi – there is no stock street truck in the world that would keep up.

Truth be told, the Hellfire Ram is likely my favorite vehicle at the entire 2016 SEMA Show and really, how can you not love it?

Of course, this is just a project truck built by the team at Dallas Speed Shop, but the creation is exactly what so many high performance truck owners are hoping for from the Ram brand.