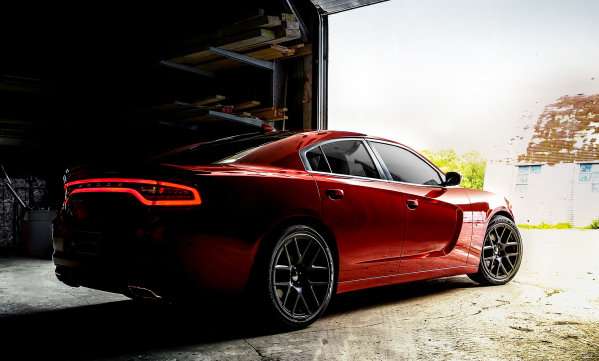 Based on comments made by Dodge brand CEO Tim Kuniskis, it seems as though the 707 horsepower Dodge Charger SRT Hellcat could make its grand debut at the 2014 Woodward Dream Cruise in Detroit, with the official announcement coming on Tuesday and the public debut of the car coming on Saturday, August 16th.
Advertisement

Earlier today, Dodge boss Tim Kuniskis was on the Detroit radio show Dave and Chuck the Freak on WRIF 101 to talk about things like the 707 horsepower Dodge Challenger SRT Hellcat that would later be piloted by one of the guys from the show. While speaking on the air, Kuniskis announced that on Tuesday, August 12th, the Dodge brand would be making a “significant performance announcement” and that the vehicle on which that announcement will focus will be on display in the massive Dodge area at 13 mile and Woodward during the August 16th Woodward Dream Cruise.

Tim Kuniskis didn’t offer any idea as to what this performance announcement might be, but nearly all signs point to a 2015 (or possibly a 2016) Dodge Charger SRT Hellcat with the same 707 horsepower, supercharged Hemi that is in the newest top of the line Challenger. Of course, this announcement could be something totally different, but everyone in the automotive world believe strongly that it should and could be the Hellcat Charger – and I agree.

Why Debut the Hellcat Charger at the Woodward Dream Cruise?
Provided that the Dodge Charger SRT Hellcat is powered by the identical blown Hemi to what makes the Challenger SRT Hellcat the most powerful American production car ever, it will be the most powerful sport sedan sold in the world by a gigantic margin. With 707 horsepower, the Charger will literally have no real competition from anything with four doors in any showroom in the world and you might think that a vehicle like that would make for a great centerpiece at a major auto show…but revealing it at the Woodward Dream Cruise will not only put it in front of more people – it will also put it in front of more people who can truly appreciate a 707 horsepower sedan.

While the Detroit Auto Show draws spectators from around the world, there is a far bigger spread in diversity at an auto show like that so, for instance, there are plenty of people there focusing on electric vehicles who couldn’t understand why anyone would want to drive a full size sedan with 707 horsepower. On the other hand, the Woodward Dream Cruise draws people from all over the world and every single one of them – whether they drove there in a classic American muscle car or they drove there in their minivan just to see the other cars – understands the passion for something as powerful as the Hellcat Charger. An auto show launch might put the car in front of more industry bigwigs, but the Woodward Dream Cruise will put the Charger SRT Hellcat in front of the people who love these types of cars the most.

If Not the Hellcat Charger, Then What?
I have to point out once again that there was no official world that the vehicle debuting at the 2014 Woodward Dream Cruise will be the Dodge Charger SRT Hellcat so the performance announcement could be something totally unrelated to the Hellcat Hemi. If that is the case, there are a variety of other vehicles that could conceivably debut along Woodward on August 16th. For example, those vehicles could include the new Dodge Viper SRT Roadster, the Dodge Dart SRT or some other Charger variant such as the new Scat Pack model with the 392 cubic inch Hemi.

In any case, Dodge lovers will have one more reason to make sure that they stop by the huge Chrysler display at the corner of 13 mile and Woodward Ave on August 16th. I attend the WDC every year and the 13 mile intersection is one of the best, as it allows you easy access to both the Chrysler display and the GM display, while also allowing easy access to some traffic free backroads that will get you quickly to the Mustang Alley and Ford display at 9 mile road.