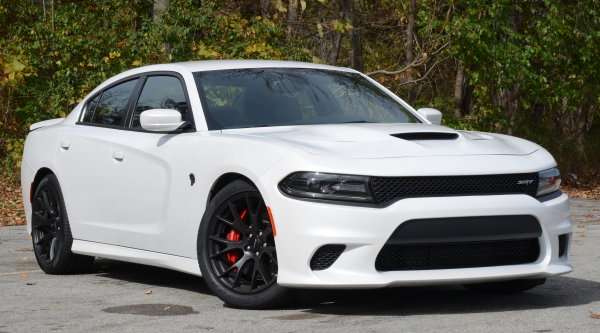 The Dodge Challenger and Charger in SRT Hellcat form are both heavily loaded in their most basic form, so it didn’t come as much of a surprise when the 2015 Hellcat cars had very few available options. For 2016, both cars get new standard features and with them comes an even shorter option list. Today, we break down the 7 options available for the 2016 model year Hellcat cars and price out the fully loaded Challenger and Charger with 707 horsepower.

2016 Dodge Challenger SRT Hellcat Options
We learned earlier this week that the 2016 Dodge Challenger SRT Hellcat would carry an MSRP of $62,495, while destination added $995 and gas guzzler fees added $1,700 for a total base price of $65,190. This includes the 6-speed manual transmission as well as the premium infotainment package and the premium Laguna leather package from the 2015 models – both of which are now standard.

Finally, if you want your 2016 Hellcat Challenger in Ivory White or Redline Red, it will add an extra $500 to the bottom line.

So, if you order a 2016 Dodge Challenger SRT Hellcat with every possible option including the 8-speed automatic transmission and one of the two premium paint colors, you can expect to pay $74,055 before any dealership markup.

2016 Dodge Charger SRT Hellcat
Like the 2016 Challenger Hellcat, the 2016 Dodge Charger SRT Hellcat gets the premium infotainment with navigation and the premium Laguna leather as standard equipment while getting a price increase for the new model year to $68,640 (including destination and gas guzzler tax). The Hellcat Charger comes strictly with the 8-speed automatic, so that is included in the price, but there are still 6 options for 2016 Charger buyers.

The most expensive option for the 2016 Hellcat Charger is the Harman Kardon audio group, which adds $1,995 to the bottom line. You cannot get the black satin hood on the Charger, but you can get a black painted roof for $1,500 along with the brass monkey wheels ($995), the Pirelli P Zero tires ($595), the red seat belts ($195) and the engine block heater ($95). Ivory White and Redline Red will retain the $500 upcharge.

If you order a 2016 Hellcat Charger with every option, you can expect to pay around $74,515, so a loaded Hellcat Charger is only slightly more expensive than the Hellcat Challenger for the 2016 model year.

While these prices are quite a bit higher than the 2015 model year, but the 2016 Dodge Challenger and Charger SRT Hellcat are still far less expensive than any car sold in the world with comparable performance.

Xerxes wrote on August 22, 2015 - 7:16am Permalink
We would rather have a no frills Hellcat Dart for $30k
Dan wrote on August 23, 2015 - 2:08am Permalink
I believe they are making a major mistake by increasing the price on these vehicles. I'm glad I purchased my 2015 Hellcat Challenger they even cut the warranty to 60,000 miles.
Dirthole wrote on August 23, 2015 - 10:16pm Permalink
Anything about the new Cheerleader Pink exterior option?
david wild wrote on November 14, 2015 - 7:17am Permalink
had a 2015 ,sold it bought a 2016 (challenger) , glad i did ,no recalls and hoping they learned from their mistakes. still a bargain !
sizzler wrote on December 6, 2015 - 12:09am Permalink
The WORSE part of the 2016 Charger Hellcat is no sunroof anymore. I emailed Dodge and this is what they said.:: <I am glad to read of your interest in Dodge. As previously advised, the Power Sunroof (GWA) or the Power Sunroof Group (AD1) is available on all models of the 2016 Dodge Charger except for the Hellcat. This is shown in the Build and Price for each model. The 20x9.5" Brass Monkey SRT Forged Wheels (WSB) are only available on the Hellcat.>
Chris Braden wrote on July 17, 2016 - 10:08am Permalink
My 2016 PCP manual Challenger Hellcat has a factory sunroof. It is available, but is overpriced at $1995. I really didn't want a sunroof on mine, nor did I want to black matte hood ($1995) or the brass monkey wheels ($995). These three overpriced options costs me almost $5000 but I was happy just to find a reasonable price on a new 2016.
Chris Braden wrote on May 10, 2016 - 5:55pm Permalink
The black hood option on the 2016 Challenger Hellcat is way overpriced. You can buy a much better or more aggressive looking after market hood for about $700. I bought a new 2016 Hellcat PCP with 6-speed manual. It had brass monkey wheels, a sun roof and the black hood, all three of which I could have done without, but I was lucky to get this Hellcat at all so I had to accept it with these $5,000 worth of unwanted factory options.