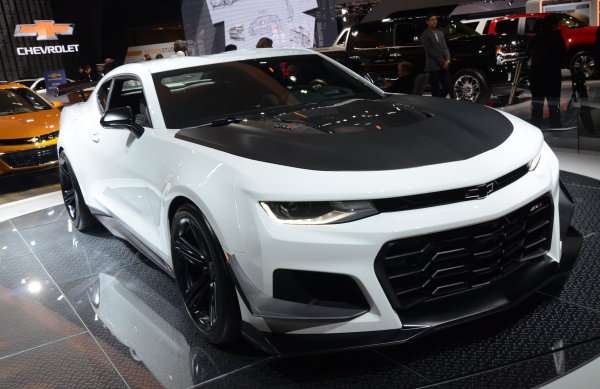 The Chevrolet Camaro posted its best sales month since the 6th generation model hit the streets in late 2015, allowing it to outsell both the Ford Mustang and the Dodge Challenger in April – marking the first monthly sales win for the Camaro since October 2016.
Advertisement

Muscle car sales improved across the board last month, with the Chevrolet Camaro, the Ford Mustang and the Dodge Challenger all selling more units than they did the month before. However, the Camaro was the big winner, posting its best numbers of the year, its best numbers of this generation and grabbing its first win in the segment sales race since October 2016. This comes in part to a huge drop in Mustang sales compared to April 2016, but with this being the best month to date for the 6th generation Camaro – last month was a great month for Chevy muscle car fans.

The Camaro takes the Win
Sales of the 6th generation Chevrolet Camaro have not been great since the company began delivering the new models back in late 2015, but the newest GM muscle car posted its best sales month to date in April 2017 – moving 8,737 new models last month. Chevrolet hasn’t sold more Camaros than that since back in May 2015, when 9,753 Camaros were sold in the US and before April, the best month for the 6th gen Camaro came back in April 2016, when the company sold 7,457 muscle cars.

In short, April 2017 was the best month for the 6th generation Chevrolet Camaro in pretty much every way. With 8,737 units, it was the best sales month of the year and the best sales month of the generation – while also representing a 17.2% increase over the same month last year. Finally, those 8,737 Camaros were enough to beat the Ford Mustang, which moved just 8,063 units in April.

Mustang Slumps Hard
In April 2015 and April 2016, the Ford Mustang posted some if its best sales numbers for each of those years, so it comes as a huge surprise that in April 2017, Mustang sales took a sharp downturn from the month before. Ford sold only 8,063 Mustangs in April 2017, after delivering 9,120 in March 2017. For comparison, Ford sold 12,726 Mustangs in April last year and 13,144 the year before, so this year saw a huge decline in pretty much every compared metric.

This big decline in Ford Mustang sales in April comes as a big surprise, and it will be interesting to see if the Motor Company can bring those muscle car sales numbers back up in May.

Mustang Still Leads Big on the Year
The Chevrolet Camaro broke the Ford Mustang’s shutout of 2017 monthly sales titles, but the Camaro still trails the Mustang by a big margin on the year. Ford has sold 30,527 Mustangs through the first 4 months of the year while Chevrolet has sold just 24,035 Camaros, so the Motor Company holds the annual segment sales race lead by roughly 6,500 units. The Challenger is 3rd with 22,316 units sold and the folks at Dodge don’t have any illusions that their muscle car will catch the other two – the Dodge team is just happy being the performance leader.

whereami wrote on May 5, 2017 - 9:41pm Permalink
The newest Camaro is pretty cool looking, the interior is the nicest upgrade, but the car isn't changed too much it looks like a evolution more so then a redesign which is what the car needs, when you look at the very first version of the 5th gen Camaro you just say I got I own that car, with this one its like yeah its just a Camaro, Chevrolet need to stop playing it safe and put out a rather future looking vehicle next time, with such a drastic look from the 4th gen to the 5th gen , thats a good example, then Chevrolet with be happier

Toyota's First EV Will Have a Name of BZ: Toyota BZ
First Videos From Inside The Boring Company's Las Vegas Loop
END_OF_DOCUMENT_TOKEN_TO_BE_REPLACED