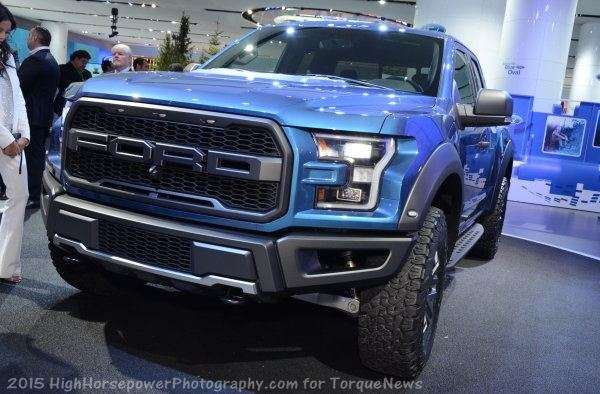 While most automakers continue to focus on getting the best fuel economy possible from a V8, the 2015 Ford F150 is flourishing in today’s market mainly with V6 power, thanks to the application of EcoBoost technology and a powerful, new naturally aspirated base 6-cylinder.
Advertisement

The 2015 Ford F150 is available with four different engines – a base 3.5L V6, a 2.7L EcoBoost V6, a 3.5L EcoBoost V6 and a 5.0L V8. With three V6 engines and a sold V8, you would expect to see sales numbers favoring the V6, but these booming V6 sales numbers show the success of Ford’s EcoBoost technology while also continuing to prove the doubters wrong.

EcoBoost Success
When Ford first launched the 3.5L EcoBoost V6 a few years back, there were plenty of people who insisted that a twin turbocharged V6 could not serve as a premium engine package in a modern full size pickup. Even though the 3.5L EcoBoost V6 was (at that time) better than the 5.0L V8 in terms of torque, towing and hauling, some still insisted that a premium half ton truck just had to have a V8. However, consumers lined up to buy the EcoBoost V6 as soon as it became available and since then, the EcoBoost V6 has been Ford’s best performing F150 engine. Prior to 2015, the F150 also had a naturally aspirated V6 that helped the EcoBoost V6 rule the F150 engine charts and with that success, Ford put a great deal of emphasis on improvements in their V6 offerings.

2015 EcoBoost F150 Options
This resulted in a new base V6 for 2015 along with a new 2.7L EcoBoost engine that offers solid capabilities while also being the most fuel efficient gasoline engine in the half ton truck segment. Of course, the 3.5L EcoBoost V6 and the 5.0L V8 are back for 2015, with the 5.0L getting a bump in power, but the V6 is still the most popular choice among new F150 buyers.

With the arrival of the new 2.7L EcoBoost V6 and the new base naturally aspired V6, the six cylinder engines for the 2015 F150 have accounted for a whopping 67% of total sales. Ford has not offered a detailed breakdown and with the 5.0L V8 accounting for 33% on its own, there is a chance that the 5.0L V8 could be close to challenging for the lead on an engine-by-engine basis, but the bottom line here is that buyers of the bestselling truck in America have made it very clear that they don’t care how many cylinders their new half ton pickup has, so long as it is powerful, capable and fuel efficient.

While there will always be those new Ford F150 buyers who wont consider anything other than a V8 engine so long as a V8 engine is offered, the steady rise of fuel prices this summer is likely to keep V6 F150 sales high through the next few months. Also, once the next generation Ford SVT Raptor arrives with a 450hp EcoBoost V6, we can expect another spike in F150 V6 sales.

While other automakers are looking at ways to make their V8s more fuel-friendly, Ford has found the best possible alternative with V6 engines that deliver V8 power while getting far better than V8 fuel economy – which is clearly sitting well with buyers around the USA.