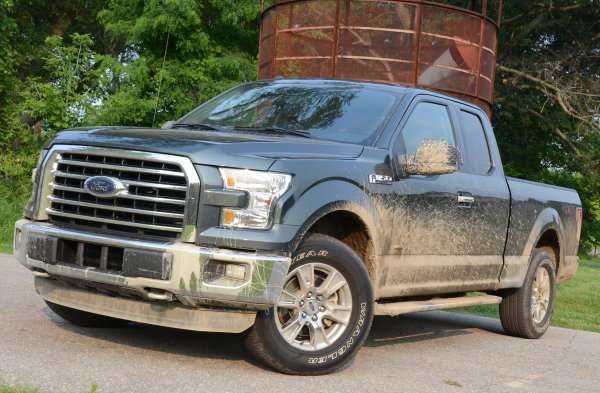 Ford Motor Company rolled the dice when they introduced the twin turbocharged EcoBoost V6 for the F150 pickup a few years back and that gamble continues to pay off, with a whopping 63% of new F150 pickups sold in August 2015 coming with one of the two EcoBoost engine options – accounting for an improvement of 86% compared to the same month last year.
Advertisement

While there are still some folks out there who question Ford’s EcoBoost engine program, there are now hundreds of thousands of people who have purchased an F150 with the powerful twin turbo V6 engine. The expectations prior to the introduction of the first EcoBoost V6 were that “truck people” would insist on a V8 for their premium engine choice, but in reality, it looks like F150 buyers aren’t so concerned with the number of cylinders so long as the engine packs enough power. Because of that, the 3.5L EcoBoost V6 has been a smashing success since day 1 and that success led to the introduction of the new 2.7L EcoBoost V6 in the 2015 F150.

The new 2.7L EcoBoost V6 doesn’t pack the premium power of the 3.5L EcoBoost, but with 325 horsepower and 375lb-ft of torque, a maximum towing capacity of 8,400lbs and a maximum payload capacity of 2,140lbs, the 2.7L EcoBoost is a very powerful little engine. More importantly, with the ability to reach 26mpg on the highway, this is the most fuel efficient gasoline truck engine in the US right now – which has led the EcoBoost technology to be even more popular in the 2015 F150.

August Sales Boom
The Ford F Series truck family posted huge numbers in 2014, often moving more than 70,000 units per month and it was widely expected that when the new 2015 F150 was introduced, it would lead to even greater sales figures. Unfortunately for both Ford Motor Company and the consumer market, the automaker has been plagued with roadblocks which have prevented them from getting enough new trucks to dealerships around the country and as a result, sales numbers through 2015 have been lower than expected. However, as Ford has kept the pace up, dealerships around the country are finally getting their full spread of new F150 pickups and as a result, August proved to be the best month of 2015 for the F Series pickup.

In August, Ford moved 71,332 examples of the F Series pickup, marking the first time in 2015 when sales climbed over the 70k mark. This is the best August since 2006 for the F Series family, with numbers being about 5% better than they were in August last year – and we can fully expect to see these numbers continue to grow over the coming months.

EcoBoost Dominates Sales
In August, there were 71,332 Ford trucks sold in the US and while we don’t know how many of those trucks were F150 models, we know that of the F150s sold last month, a whopping 63% had either the 2.7L or 3.5L EcoBoost V6. That leaves just 37% to be divvied up between the base model V6 and the 5.0L V8, making it very clear that while expensive – EcoBoost technology is clearly the most popular option for those folks buying the 2015 F150.

LG's New EV Battery Plant Is a Welcome News for Tesla
Tesla Giga Berlin's New Hurdle: It's Not Only the Gov't, but Now Tesla Itself
END_OF_DOCUMENT_TOKEN_TO_BE_REPLACED