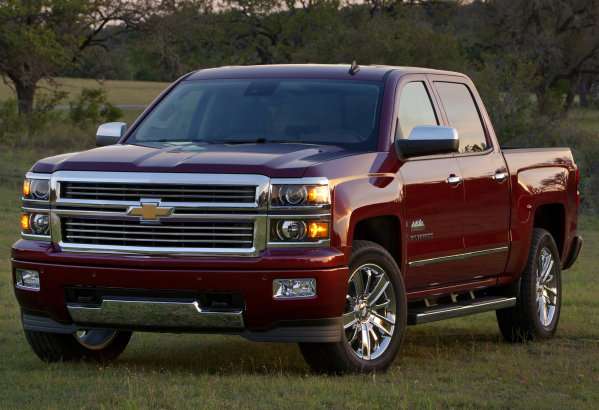 General Motors has announced the official power ratings for the 6.2L V8 engine that powers the 2014 Chevrolet Silverado and the 2014 GMC Sierra – numbers that make the new top of the line GM half ton pickups the most powerful available on the market today.
Advertisement

More importantly, the new 6.2L GM V8 truck engine available in the 2014 Chevy Silverado and GMC Sierra offers more torque than any other gasoline-powered pickup available in the US market. While the heavy hitting and high priced diesel engine options in the Ford Super Duty and Ram HD offer substantially more torque than the new 6.2L GM gasoline motor, the new Chevy and GMC trucks pack more torque than any other non-diesel truck sold in America. In a segment where many buyers focus more on torque than horsepower, the fact that GM offers the highest torque output of any gasoline engine in America should be a major selling point for the company.

GM hasn’t provided full information on the 2014 Silverado and Sierra towing numbers but the company’s statement announcing the segment leading power output mentioned that a properly equipped Silverado or Sierra 1500 will offer a towing capacity of 11,500 pounds when fitted with the 5.3L V8 and those trucks powered by the 6.2L engine will tow an impressive 12,000 pounds. Those maximum towing capacities make the new Chevy and GMC half ton trucks the leader in the class as the Ram 1500 has a towing capacity of 10,450 pounds and the Ford F150 will pull a best of 11,300 pounds. As mentioned, details are very limited but the GM statement does point out that the max towing package that will allow the 2014 Silverado and Sierra to pull 11,500 pounds will rely on the smaller 5.3L V8 with “only” 355 horsepower and 383lb-ft of torque and this will not be available until later this year. It is also unclear whether the 6.2L towing capacity of 12,000 pounds also requires a similar max towing package but that doesn’t make all that much of a difference as even the “lower line” 5.3L V8 offers a better towing capacity than any other half ton truck on the market.

While the new 6.2L V8 that makes the 2014 Chevrolet Silverado and GMC Sierra the most powerful trucks on the market, it will also drive Ford and Chrysler to increase the output and capabilities of their half ton pickups. The clash between the Ram 1500, the Ford F150 and the Silverado 1500 has been raging for years with each company striving to regularly 1-up the other two trucks so with the new 6.2L engine making the 2014 Gm trucks the most powerful in a variety of ways – it is only a matter of time before Ford or Ram roll out their next big thing.

LG's New EV Battery Plant Is a Welcome News for Tesla
Tesla Giga Berlin's New Hurdle: It's Not Only the Gov't, but Now Tesla Itself
END_OF_DOCUMENT_TOKEN_TO_BE_REPLACED