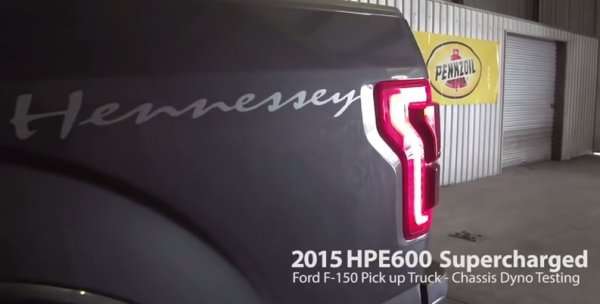 Last December we brought you a first look at the Hennessey VelociRaptor 600 package for the new 2015 Ford F150 and now that those monster performance trucks are hitting the street, we have a video of one of those beasts in action on the dyno – and the results are pretty impressive.
Advertisement

While there is a new Ford SVT Raptor F150 coming in the next year, those prospective Ford truck owners who like going very fast in their pickup don’t have a real option. Fortunately, the folks at Hennessey Performance have put together a simple kit that lifts the output of the new F150 5.0L V8 from 385 horsepower to 600+ horsepower at the crank shaft, making the Hennessey-tuned F150 one of the baddest trucks on the road today.

Hennessey VelociRaptor 600 F150
The Hennessey VelociRaptor 600 package for the 2015 Ford F150 is pretty simple. It consists of a 2.9L supercharger that is mounted to the standard 5.0L V8 while an in-house Hennessey tune brings all of the engine parameters together for optimal power, along with the gaskets, fluids and fasteners needed to install the supercharger setup. There are also some badges inside and out

That is the whole package for the Hennessey VelociRaptor 600 and that is all that you need to transform your 2015 F150 with the 5.0L V8 into a sports car killer with 600+ horsepower. To show off this new package, Hennessey Performance recently released a video showing a new F150 fitted with this blower package on the dyno, and based on the wheel horsepower results, this package makes quite a bit more than the advertised 600 engine horsepower.

Dyno Action
This new video shows a 2015 Ford F150 fitted with the Hennessey VelociRaptor 600 package. First off, make sure that your speakers are cranked up, as this F150 sounds wicked when roaring on the dyno. The mix of the roar of the engine and the whine of the supercharger is truck-lover bliss, and the results of the dyno blast is pretty impressive as well.

Mike Santo wrote on October 27, 2015 - 2:54pm Permalink
I wouldn't let Hennessey tune my lawn mower. OVERPRICED is the first thing that comes to mind. You pay 100% more than what a competent tuner shop would charge to put a 2.9L Whipple on it just to have his dumb ass name on it. Shit this guy hasn't even competed in any of the major racing series, he is just a wrench who got lucky with a few rich famous clients!! Go ahead and give this fat ass your hard earned money, you end up being the jackass!! LMAO!!