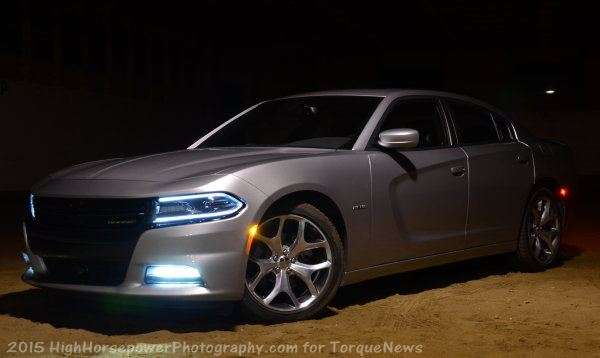 The 2015 Dodge Charger R/T has kind of gotten lost in the shuffle with the media interest in the new Scat Pack and Hellcat trimlines, but the Charger R/T is an amazing package with a low price, very solid performance capabilities and all of the interior comforts to make for a great daily driver whether you are a young and single or a family man with two kids.
Advertisement

While there are undoubtedly a great many people who will read this and insist that everyone who buys a 2015 Dodge Charger should get the Scat Pack, SRT 392 or SRT Hellcat trimlines, but the fact of the matter is that the Charger R/T has been the most popular trimline since the car was introduced back in 2006. This “entry level V8” package packs an incredible mix of power and fuel economy, so for someone who wants a big, powerful sedan with one of the most award winning interior layouts on the market – all for under $40,000 – the Charger R/T offers bang for the buck like no other large sedan on the market today.

Sleek, high tech exterior
The 2015 Charger R/T has the high tech look that was introduced last year, with the most unmistakable face in the American auto industry right now. The racetrack taillight design has proven to be very popular over the past few years with several vehicles in the Dodge lineup, so the company took that a step further for the 2015 Charger – adding what are essentially racetrack headlights. They don’t complete a full circle, but both headlight housings are trimmed in a bright white LED light bar with HID projection headlights and LED fog lights lower in the fascia completing the high tech look. Not everyone loves this new front end, but I do. It is remarkably high tech looking, bringing a much higher end, dare I call it “European” look to the muscular sedan. Like all of the modern Dodge Charger sedans, the 2015 R/T has a wide, low stance that looks aggressive from any angle, but there is no aspect more recognizable than the gorgeous racetrack taillight. I like the headlights, but I have adored this taillight design since it was first introduced and the newest incarnation is the best looking. There is also a low profile rear spoiler, dual exhaust tips integrated into the lower rear fascia and a set of bright 20 inch wheels that are included as part of the R/T Plus package. While not everyone loves the front end of the 2015 Dodge Charger, I am a huge fan of the modern look on the full sized sport sedan. It isn’t quite as aggressive as the more powerful models, but it still hasn’t an unmistakably powerful look from every angle.

Roomy, Luxurious, High Tech Interior
The 2015 Dodge Charger R/T is a full sized sport sedan, so it should come as no surprise that it has gobs of space for passengers in the front and rear seats. Even for very tall riders in the back seats, there is lots of leg room and head room, even when the front seats are adjusted to comfortable seat a 6 foot tall driver and passenger. There is also a huge trunk, so if you are driving a group of buddies to the golf course with their bags or driving yourself and the family to grandma’s house for the holidays with luggage and gifts for everyone. What might surprise you with the 2015 Dodge Charger R/T Plus is the long list of premium amenities, starting with the Nappa leather seats featuring power controls, heated and cooled surfaces up front with heated outboard rear seating positions. These seats look great and the feel great, so this is a vehicle that four adults can use to drive for a weekend getaway with everyone being very comfortable on the ride. Next, the 2015 Dodge Charger R/T Plus has one of the most advanced infotainment systems on sale today, and that begins with the 8.4 inch touch screen mounted high on the dash. This screen puts control for almost every aspect of the cabin right at your fingertips, giving the driver and front passenger easy access to the controls for the sound system, the navigation, and heated/cooled seats, the multizone climate control, the hands-free phone system and the UConnect app suite. The driver also has a spread of controls on the front and rear of the steering wheel, providing quick access to sound system control, to the hands-free phone system and to the configurable driver information screen in the middle of the high tech gauge cluster. The Charger R/T gauge cluster has a large pair of analog gauges that display engine RPM and vehicle speed, but the large center screen can be customized to a variety of different information in the corners while the central section can display vehicle speed, navigation info, vehicle settings or other engine gauges. The Charger R/T with the R/T Plus package gives this muscular sport sedan the interior feel of a luxury car with tons of leather, heated and cooled seats and one of the best infotainment systems on the market.

370hp, 395lb-ft of torque, 8-speed Transmission
While the majority of gearheads will insist on the Scat Pack or SRT 392 Charger with 485hp or the Hellcat with 707hp, the Charger R/T is no slouch. Packing 370 horsepower and 395lb-ft of torque and sending that power to the rear wheels via a quick-shifting 8-speed automatic transmission, the Charger R/T provides power and the muscle car feel that is nearly impossible to find from another car in the large sedan segment. When you hammer the gas from a stop, the 5.7L Hemi quickly puts a hard smokin’ to the rear tires and when the tires do grip the pavement, the Charger R/T will rip away from a stop as well as a great many sports cars sold in America. Remember, when the Dodge Charger was first introduced back in 2006, people were fired up to get a rear wheel drive sedan with 345 horsepower and while new, more powerful trimlines have come along for the Charger lineup, the Charger R/T is still a very solid 13 second quarter mile car. This means that your big, roomy family sedan will hang with a great many of the muscle cars on the road today while still offering the capability to get 25mpg on the highway. The 5.7L Hemi will get the Charger R/T down the quarter mile in a hurry, but it will also allow it solid cruising speeds on the highway and when cruising at those highway speeds, the Charger R/T is smooth, comfortable and quiet. Around town, the Charger R/T offers solid handling and braking and while it may not hang with the more expensive, more powerful Charger trimlines – the R/T package still makes the 2015 Dodge Charger one of the most engaging large sedans on sale today. Also, while it offers awesome levels of performance, when driving it casually, it is just as comfortable as any car in the class. Of course, it Is plenty comfortable when being driven hard as well, but my point is that while it will hang with a sports car in a drag race, it offers the comforts that you need from a daily driven sport sedan. The Final Word
If you are looking for a roomy large sedan that is powerful, fun to drive, surprisingly efficient for a V8 engine and packed with luxury amenities for under $40,000, the Dodge Charger R/T Plus is unquestionably the best bang for your buck. There is simply no other car on the market that offers the interior space, the power, the fuel economy figures and the award winning interior goodies for under $40,000. This is a family sedan with a family sedan price, but with the interior of a luxury car and the spirit of a muscle car.