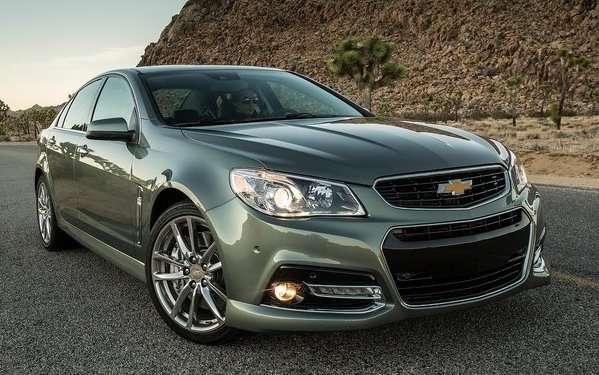 The 4-Door Corvette Could Get Camaro 1LE Inspiration

In an effort to spur sales by improving performance capabilities, the Chevrolet SS sedan – the car once referred to by GM as the 4-door Corvette – could get a new handling package similar to the 1LE setup for the Camaro.
Advertisement

The Chevrolet SS is an odd beast. Unlike most sport sedans sold in America, there is no lowline model with a fuel friendly V6, so unlike some people who might buy the Dodge Charger SXT based on the appearance, people buying the high performance Chevy sedan have to be focused heavily on performance. It was likely with that in mind that GM has called the SS a 4-door Corvette, as they wanted to attract those same people who love the no-nonsense approach to performance that you get with the new Stingray.

General Motors had offered the more common model lineup a few years earlier, calling it the Pontiac G8, which had a full range of engine options, but that car obviously died with the Pontiac brand. When the Chevy SS was first introduced, sales were slow, so GM rolled out a no-cost manual transmission option with the hopes of spurring sales, but through the entire 2014 calendar year, Chevy sold just 2,479 SS sedans – a rate of about 206 per month. This made the SS the second worst-selling car for General Motors in 2014, beating only the Cadillac ELR. In January, Chevy sold 115 examples of the SS, so things don’t appear to be getting a whole lot better for the 4-door Corvette.

However, GM isn’t giving up on the Chevrolet SS, and according to the folks at Motor Trend, the SS could soon benefit from a handling package similar to the 1LE package from the Camaro SS. This could improve performance levels, so those people who already want one now, will want one even more.

The Chevy SS 1LE
The key components of the Camaro 1LE package are the specially tuned dampers and springs, larger front and rear stabilizer bars and unique 20 inch wheels wrapped in sticky rubber, so we would expect that a similar package for the SS would be very similar. This would likely include unique dampers, some adjustments to the magnetic ride system tuning, larger stabilizer bars and lightweight rims wrapped stickier performance tires. Also, where the standard SS has staggered front and rear tires, the SS 1LE package would move to use the same size tires on all four wheels.

This package would give the Chevy SS a lower, more aggressive stance thanks to both the new dampers and the unique wheels, while also allowing the big sedan to get around the corners more quickly. With any luck, GM would give the SS a unique black hood, as I love that look on the Camaro 1LE. The SS 1LE would likely also get a new rear spoiler and the sueded interior of the Camaro package, or, at least I would like to see those features make the jump to the big Chevy sedan.

The Problems
There are a few downsides to the possibilities of a Chevy SS with a 1LE package. First, it would take 3 to 6 months to get the system all put together for approval. Second, and most importantly, it would likely take at least 6 months go wiggle the package through all of the bean counters and executives. Finally, the 1LE package would push the already high price of the Chevy SS even higher.

The 1LE package for the Camaro costs $3,500. The 2015 SS MSRP starts at $45,745, but when you add in the destination fees and the Gas Guzzler Tax, the minimum MSRP is actually $48,040. When you tack on the additional $3,500, you have a Chevy SS sedan that costs $51,540, before you add any other options. That is a few thousand dollars more than the 2015 Dodge Charger SRT 392, which has considerably more power and while the Chevy sedan with the 1LE package might handle well, I question the ability of the SS to keep up with the far more powerful Charger SRT 392. The Chevy might get around some corners quicker, but I don’t believe that the slight advantage in handling would be enough to beat the 485hp Charger.

In the long run, this addition to the Chevy SS option list could attract a few more buyers, but with sales continuing to be so low, you really have to wonder how long the SS will live on in the US market.

Auto Motive wrote on March 5, 2015 - 7:40am Permalink
The SS is dead in the water and sales are so low GM doesn't even want consumers to see them. A stale decade old Holden style just like the failed GTO Holden. Sales were made by the blind loyalists faithful to GM like a cult. After that its done and sales go way down. We car guys know a dud and this is the biggest out there. I wouldn't even consider paying over $40k for a Holden.