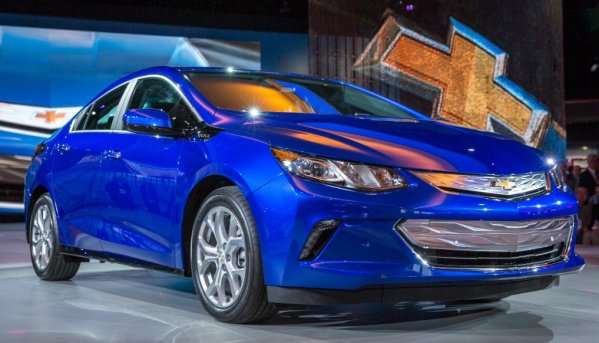 General Motors has confirmed that the new 2016 Chevrolet Volt will only be available in California and 10 other “CARB” states, leaving prospective Volt buyers in the other 39 states waiting for the 2017 model year to buy a new range extended Chevy EV at their local dealership.
Advertisement

The 2016 Chevrolet Volt will be better than the previous generation Volt in every way - from electric range to fuel economy when running on the gasoline engine to overall range – all of which should lead to improved sales as the 2016 Volt will “fit” into the daily driving routines of more Americans. Unfortunately, the only Americans who will be able to buy the 2016 Chevy Volt are those who live in the 11 states that follow the California Air Resourced Board (CARB) rules including California, Connecticut, Massachusetts, Maryland, Maine, New Hampshire, New Jersey, New York, Oregon, Rhode Island and Vermont. Mind you, Im not saying that the 2016 Volt will arrive in those 11 states first followed by a full rollout in the other 39 states. Those other 39 states will not get the 2016 Volt, at all.

Odd Allocation Plan for the 2016 Volt
When General Motors first began discussing the allocation program for the 2016 Chevrolet Volt, it was clear – and not surprising – that California would be the first area in the US to get the latest and greatest extended range EV. California leads in EV sales, so it makes perfect sense for GM to make that market their focus of attention when the 2016 Volt is launched. Rumors suggest that production of these Cali-bound 2016 Volts began last month and orders could begin on October 1st.

After California, 10 other states that use the California Air Resourced Board (CARB) rules will get access to the 2016 Volt, as these are the 10 markets outside of California where electric vehicle technology is the most popular, so buyers in Connecticut, Massachusetts, Maryland, Maine, New Hampshire, New Jersey, New York, Oregon, Rhode Island and Vermont will get their shot at the 2016 Volt shortly after the California buyers – with orders expected to begin in late October.

That is the end of the allocation process for the 2016 Chevrolet Volt. GM will focus all of their attention on those 11 states and literally everyone in the other 39 US states will be unable to buy the new Volt at their local dealership.

This is a bit of a shot to the pride of EV drivers and prospective EV buyers in those other 39 states and it makes sense for GM to focus their attention on the strongest markets, but it is still an odd business decision. After all, I live in Michigan and I see tons of Chevy Volts on the road, as well as a few Nissan Leafs, so while GM is making sure that their biggest markets are covered with the 2016 Volt – they are excluding a massive group of American buyers.

2017 Volt Coming Soon
The good news for the folks who live in states other than California, Connecticut, Massachusetts, Maryland, Maine, New Hampshire, New Jersey, New York, Oregon, Rhode Island and Vermont is that the 2016 model year Volt is a short model year. Production of a “normal” model year run generally goes from late in a current calendar year through the summer of the following year. For example, the 2016 Camaro production will begin this fall and it will likely run well into the summer of 2016. However, the 2016 Volt production will also begin this fall, but it looks as though production of the 2017 model will begin in the early spring of 2016, shortening the 2016 model year by a significant amount.

When the 2017 Chevy Volt arrives in the late spring or early summer of 2016, it will be available in every state, so while the folks outside of the aforementioned CARB states will have to wait for the new and improved next generation Chevy Volt – they won’t have to wait for very long.

Linda Mussaw wrote on September 9, 2015 - 5:57pm Permalink
That doesn't seem fair to the rest of the EV purchasers. How many sales will GM lose to those who choose another make or model in the interim? Personally my current lease isn't up until Dec 2016 but if it was up at the end of 2015 I would be livid.
Michael Murphy wrote on September 9, 2015 - 7:59pm Permalink
Confirmed by whom, exactly? Why do dealers not have this information. Why do district MANAGERS not have this information? Do you have a direct quote from somebody in power at GM or is this pure speculation from the fuzzy screenshot that has been making the rounds?
Bryan wrote on September 10, 2015 - 1:49am Permalink
If the are hooking up California couldn't they do the same for Nevada.im in the military and can't wait to get the new Volt.
Ian Haten wrote on September 11, 2015 - 10:12am Permalink
That does not sound good for Europe where there latest clutch of EVs, EREVs, Rexs and PHEVs are still trying to play catch up to the Ampera & Volt.
mike w wrote on September 12, 2015 - 3:11pm Permalink
I live in one of the 39 other states and this is not what I want to listen to. We have a 2011 Leaf with NO battery heater. when outside temps drop into the single digits we get 15 miles on a full charge. We need that 2016 Volt now not next year. So my options are to spend another winter freezing in my car or drive to Maryland and buy a Volt there? Even by GM standards this is poor.