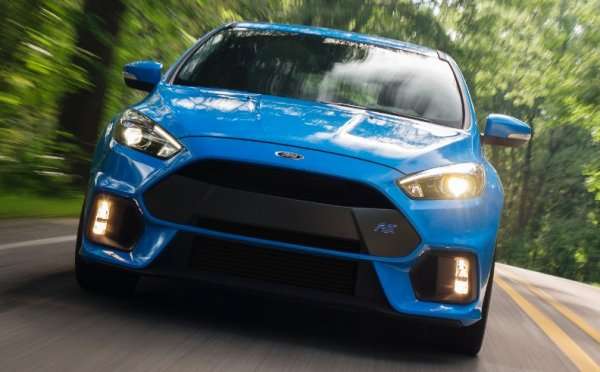 Ford Motor Company has announced that the 2016 Focus RS will officially feature 350 horsepower and 350lb-ft of torque, but more importantly, the wicked hot hatch will feature a new “stall recovery system” that will make dealing with the clutch pedal a little less painful for unskilled drivers.
Advertisement

When the 2016 Ford Focus RS was first introduced earlier this year, we were promised that it would deliver at least 315 horsepower and 315lb-ft of torque. In July, the word hit the street that the Focus RS would deliver 345hp and 324lb-ft of torque – with torque levels climbing to 347lb-ft during the limited “overboost” mode. Finally, when the Motor Company announced some performance specs such as the 0-60 times and the top speed last month, they said that there were projected power figures of 350hp and 350lb-ft of torque.

Today, the officially official production specifications have been announced and the Focus RS is even more powerful than we had expected when the specs first hit the internet back in July.

Official Focus RS Specifications
According to the most recent announcement from Ford Motor Company, the 2016 Focus RS will deliver 350 horsepower at 6,000rpm and 350lb-ft of torque at 3,200rpm, while the redline is programmed at 6,800rpm. These numbers are capable thanks to Ford’s twin scroll supercharger, which packs a 23.2 pounds of boost into the 2.3L EcoBoost engine, making the Focus RS the most powerful hot hatch in today’s market shy of the high-priced luxury segment.

For a quick comparison, the “official” numbers announced back in July had the Focus RS making 345hp and 324lb-ft of torque, while an overboost mode that could be engaged for 15 seconds at a time lifted the torque levels up to 347lb-ft. Back in July, we didn’t learn the RPM levels of the peak horsepower, but we know that the 324lb-ft of torque was expected between 2,000 and 4,500rpm. There is no mention of the overboost feature in the most recent release, but I would suspect that the 350lb-ft of torque comes during the overboost mode and even with “only” 324lb-ft of torque (should that be an official figure) – the Focus RS shouldn’t have any problem keeping up with the likes of the Mitsubishi Lancer Evolution or the Subaru WRX STI.

Stall Recovery
The 2016 Ford Focus RS is only available with a proper 6-speed manual transmission and the requirement of shifting your own gears can prove to be a daunting task to some people. For those people who aren’t so skilled with the crucial coordination needed to make a manual transmission vehicle with a clutch pedal, Ford has come up with a way to quickly and easily get the Focus RS running once you have stalled it out.

When you let the clutch out too quickly and the throttle too slowly, the Ford Focus RS might stall. In most vehicles, when you have embarrassed yourself and stalled your performance car at a stop light, you would have to push the clutch back in, turn the key and wait for the engine to fire up. In the Focus RS, if you stall it, you just push the clutch pedal back in and the car will automatically start back up – cutting seconds from the headache of restarting your car in traffic once stalled.

“We knew we wanted to put start-stop technology on the RS,” explained Tyrone Johnson, engineering and vehicle manager, Ford Performance Europe. “So we said, ‘What if we went one step further, and controlled for engine stall at launch using the same technology?’ Well, that’s exactly what we did and it’s just as fast as our start-stop technology.”

Production of the 2016 Ford Focus RS will begin later this year with deliveries following closely behind and when it does arrive – this new Ford will almost surely lay a smack down on every other hot hatch and sport compact sold in America.

Soakee wrote on October 14, 2015 - 8:33am Permalink
"For those people who aren’t so skilled with the crucial coordination needed to make a manual transmission vehicle with a clutch pedal,..." Those people should certainly NOT be RS buyers anyway.

Toyota's First EV Will Have a Name of BZ: Toyota BZ
First Videos From Inside The Boring Company's Las Vegas Loop
END_OF_DOCUMENT_TOKEN_TO_BE_REPLACED