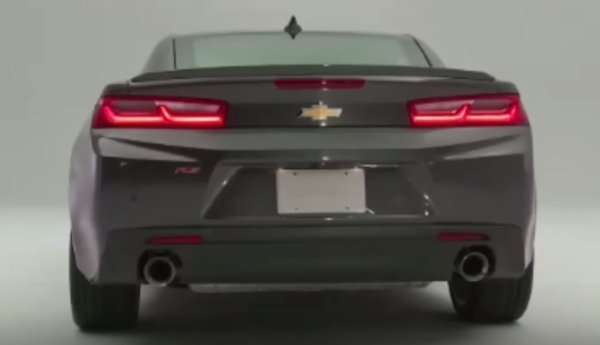 3 Reasons Why the 2016 Camaro Turbo Exhaust Video is Fake

A video has surfaced showing a 2016 Chevrolet Camaro in a photography studio with a soundtrack which supposedly comes from the new turbocharged 2.0L engine, but I suspect that it is fake for three reasons that the people sharing this video are missing.
Advertisement

Since it was announced that the 2016 Chevrolet Camaro would come with a turbocharged 4-cylinder engine, people have been wondering what the 4-cylinder Camaro would sound like. On one hand, you generally want some kind of exhaust sound from a muscle car, but the import crowd has shown that loud exhaust on a 4-cylinder can often create a sound that is undesirable to the muscle car crowd.

Well, what appears to some to be the first exhaust video of the 2016 Chevrolet Camaro with the turbocharged 4 cylinder engine has surfaced on YouTube and while some people are excited – I am not. The more I watch the video, the clearer it becomes that this video is fake, so there is no way of knowing if this engine sound actually came from the turbocharged 2.0L Camaro engine.

Not from GM
The first, and what I consider to be the most critical piece of information, is that this video of the 2016 Camaro is not from General Motors. Well, technically, this is a GM video, but the actual clip from GM was shot in a sound studio and the car wasn’t running. Someone else added the sound and it wasn’t the automaker. The YouTube channel that posted the video is named exhaustROAR, which has no affiliation to General Motors.

Realistically, if General Motors made a video of the 2016 Chevrolet Camaro sitting in a photography studio, revving the engine, it would appear on one of their official YouTube channels – or it would be available on the media site. No such video exists anywhere on any official GM page, which is the clearest piece of information proving that this video is a fake.

Wind Noise Inside
As mentioned above, this video is footage from General Motors, captured when the 2016 Chevrolet Camaro was in a photography studio. However, if you listen to the video and try not to pay attention to the engine noise, you can hear wind blowing against the microphone. There wouldn’t be wind in a studio, thus no wind noise. More importantly, if GM was going to record the sound of the 2016 Camaro for a video, they would take the measures to make the clip without wind pounding against the microphone.

No Movement
Finally, the 2016 Chevrolet Camaro in this video is sitting perfectly still while the engine is revving. If you watch any car rev the engine, there is almost always some body motion. Also, the exhaust tips don’t have anything coming out of them and they are also not moving at all. This doesn’t make sense.

Also, the video freezes a few seconds in, yet the engine revving continues throughout the short video – making the video seem even less like something an automaker would publish.

john costa wrote on August 7, 2015 - 1:35pm Permalink
I am a shop foreman for gm 29 year employe I wish the car sounded like this !! from the factory with a 4 cylinder ,gm would sell out if its true.
67LS1 wrote on August 8, 2015 - 10:43am Permalink
Fake. Sounds like the V6.
charles krentzer wrote on August 31, 2015 - 2:24pm Permalink
A four sounds like a four. The Mustang had to resort to an audio supplement inside the car for driving pleasure. A resonated four can sound good, but the sound belongs to the small roadster club. A six has a decent natural sound, but hard to make them sound muscle GRUMBLY. An eight is the only engine that can really sound Heavy. Either way, after owning a sports car or muscle car, the exhaust note becomes less and less important. But carbon buildup from Direct Injection IS something to fret over.
Robert Lamontagne wrote on February 21, 2018 - 6:25pm Permalink
I have one now and it sounds just like that

Toyota's First EV Will Have a Name of BZ: Toyota BZ
First Videos From Inside The Boring Company's Las Vegas Loop
END_OF_DOCUMENT_TOKEN_TO_BE_REPLACED