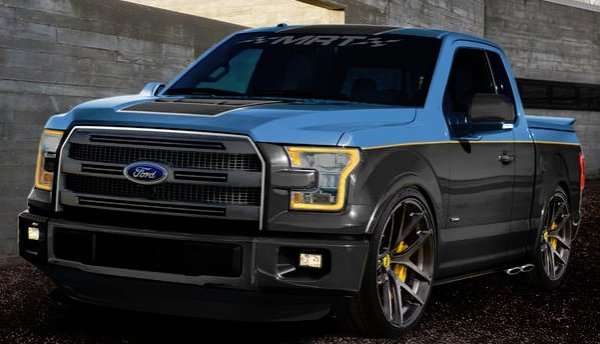 The 2015 SEMA Show is less than a month away and today we have a look at three of the customized 2015 Ford F150 pickups that will help fill the Motor Company’s huge display in the Las Vegas Convention Center – with two intended for on-road fun while the other will go fast on almost any surface.
Advertisement

Each year, basically every company that does any business in the American auto industry heads to the Las Vegas Convention Center in late October/early November to show off their wares at the SEMA Show, and Ford Motor Company always has one of the largest, most popular displays at the massive event. This year, we can expect that the 2015 Ford F150 and the 2015 Ford Mustang will be among the most popular vehicles at the show throughout all of the booths, but today we bring you an early look at just three of the new Ford F150 pickups that will be on display in Ford’s main area.

Keep in mind, the details are short right now, as Ford will make us wait until the show for all of the details on this great looking F150 pickups. However, these few images and the sparse details are enough to know that these should be some awesome show trucks. Michigan-based MRT is best known for their high performance work with the Ford Mustang, but at the 2015 SEMA Show, the slick looking black and blue F150 short bed/short cab pickup will showcase MRT’s work on the new half ton pickup. There are no details on the engine work, but we know that MRT is well versed in tuning the EcoBoost V6, so I would expect some serious power under the hood of this 2015 F150. Best of all, in addition to the extensive exterior upgrade package, the MRT F150 will feature a Tremec 6-speed manual transmission mated to the twin turbo V6. The Roush name is legendary in the world of Ford performance, so it should come as no surprise that what looks to be one of the most powerful new F150 pickups at the SEMA Show will be built by Roush. On top of the unique wheels and the crazy black, red and white paint scheme, this F150 will feature a Roushcharged 5.0L V8 that is expected to make somewhere in the area of 650hp.

Last but most certainly not least is the 2015 Ford F150 built by Galpin Auto Sports. Where the Roush and MRT trucks were made to go fast on the road, the Galpin F150 was built to fast pretty much anywhere. The 3.5L EcoBoost V6 has only been lightly modified with an intercooler and a new exhaust system, but the extensive suspension upgrades, a huge Wilwood brake kit and custom wheels wrapped in all-terrain tires make this a street friendly off-road racer. Finally, that Gulf Racing livery guarantees that this will be one of the most popular trucks on display, with a look that is likely to draw the attention of performance minded show goers.