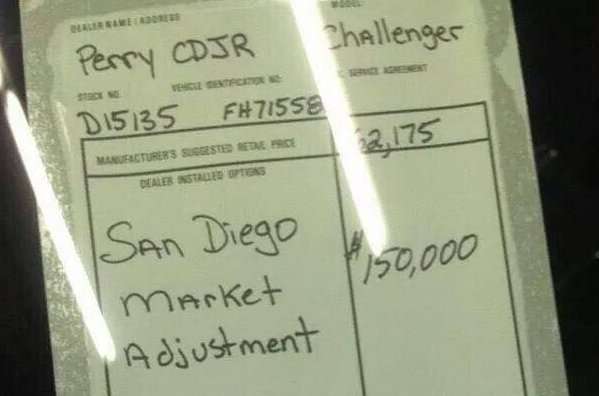 This past weekend, a dealership window sticker for a 2015 Dodge Challenger SRT Hellcat surfaced online with a $150,000 markup bringing the asking price up to $212,175, but it has been found that this price is either a joke or a clever advertising campaign – but in any case, this price isn’t real.
Advertisement

This weekend, I was flipping through my Facebook news feed when I saw a window sticker that was said to be for a new Dodge Challenger SRT Hellcat with a price of $212,175 popped up. This wasn’t an official printed Monroney from Chrysler, but instead, it was a dealership option price tag that would accompany that normal window sticker. This sticker didn’t actually specify that it was a Hellcat, but it did say Challenger and it did list an MSRP of $62,175, making it pretty clear that this sticker was on a 707hp Hellcat Challenger.

Below the MSRP on the window sticker was a line item for a San Diego Market Adjustment, which added $150,000 to the base price of the 2015 Challenger Hellcat for a total price of $212,175. Needless to say, this high price drove the internet performance world into a frenzy, but knowing that many dealerships are selling Hellcat Challengers for numbers far closer to MSRP, I didn’t take this price tag seriously. In looking around the internet, I saw a handful of information that only secured my opinion that the price tag was a fake.

Well, a variety of publications around the internet contacted the dealership listed on the price tag and, as I expected, the $212,175 price tag for the Challenger SRT Hellcat was indeed fake. The dealership is not actually adding a $150,000 markup to the most powerful muscle car ever.

The Story Behind the $150k Markup
According to a variety of sources including Motor Authority, Perry Dodge received their silver 2015 Dodge Challenger SRT Hellcat, but they weren’t sure what they were going to ask for the 707hp muscle car. Because of this, they didn’t want the car on the showroom floor, so it was moved to a back lot and an employee was told to not a “Not for Sale” sign on the car. Instead, that employee thought that he or she would be funny and deter interested buyers by putting a dealership option sticker in the window with a $150,000 markup for a San Diego Market Adjustment.

Unfortunately, someone took a picture of the Hellcat Challenger price tag with a final price of $212,175 and posted in online. That picture quickly went viral and there was a huge backlash against that dealership for the alleged price gouging. The dealership quickly removed the fake price tag and added the “Not for Sale” sign, but the damage had been done. Perry Dodge has been vilified by the anti-dealership people online, even though the whole thing was nothing more than a bad joke by dealership worker.

Joke or Marketing Campaign?
I have worked for a Dodge dealership and honestly, this whole story about the $212k Challenger SRT Hellcat seems a little fishy. It could have been a very stupid joke by a shortsighted employee, or it could also be a questionable marketing campaign by the folks at Perry Dodge. Yes, there was some hate aimed at the dealership when people thought that they were actually trying to sell their Hellcat Challenger for $212,175. However, now that the whole ordeal is being straightened out, the automotive world knows that Perry Dodge has a Hellcat Challenger for sale and they will be adding a much smaller markup than $150,000.

Those folks who are willing to pay $70,000 for a 2015 Dodge Challenger SRT Hellcat, but who did not preorder one, know now that there is one for sale in California and it might be in their price range.

So, clever marketing campaign or a careless joke? Tell us what you think in the comments below.

Carl wrote on December 11, 2014 - 10:54am Permalink
No way that any hourly lot porter put this addendum sticker in the window without approval by sales management. If a sales manager told a lot porter to put a 'Not For Sale' sign in the car, that's what he'd do.
david wrote on December 11, 2014 - 9:19pm Permalink
This is something I recently saw in San Diego as well, a lot of the dealers around do this "San diego" markup, I was looking for a raptor last year and had to go out of state all the dealers around that had decent inventory had at least a $50,000 market "markup" on their vehicles. Its a complete scam.
JACKAL wrote on December 24, 2014 - 12:41am Permalink
University Dodge in Davie, FL asking for $100,000 mark-up on their Hellcat. Ad on EBay & AutoTrader.com for a couple of weeks now, can't be a typo...