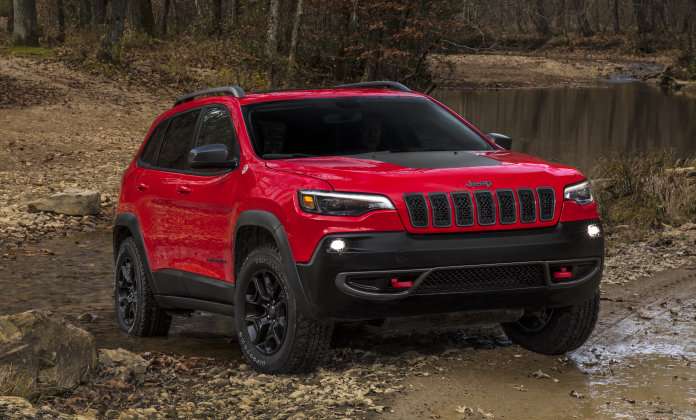 The 2019 Jeep Cherokee Gets a New Face

FCA has released a few pictures of the refreshed Jeep Cherokee for the 2019 model year and while the promise of more premium features and more fuel-efficient engines will attract many buyers – the big news here is the new front end design of the midsized SUV.
Advertisement

The Jeep Cherokee returned to the brand’s lineup for the 2014 model year after a 13-year hiatus. As one of the most popular Jeep models during its 27-year run prior to its demise in 2001, the Cherokee had plenty of enthusiasts excited about its triumphant return. However, when the 2014 models were introduced with a front end design unlike anything else in the Jeep lineup, some of the more hardcore Jeep fans – particularly those with the older versions of the Cherokee – were quick to dismiss it.

The good news for Jeep was that the people who either liked or didn’t care about that unique front end bought the Cherokee in droves, and that has continued over the past few years. In trailing only the Grand Cherokee and the Wrangler, the modern Cherokee has been Jeep’s third-strongest-selling model over the past few years, with more than 150k examples sold during the first 11 months of 2017.

Even with the strong sales numbers, the Jeep engineers were hard at work designing a new front end, and that new face will make its grand debut next month at the 2018 North American International Auto Show in Detroit. FCA has offered up a few pictures of the new Cherokee in advance, along with a short release promising a more premium cabin and more fuel-efficient powertrain options, but most notably, the 2019 Cherokee has a new face

Meet the 2019 Jeep Cherokee
Yesterday’s press release introducing the 2019 Jeep Cherokee was extremely brief and no real details were offered. In fact, this was the entire body of the release:
“The most capable mid-size sport-utility vehicle (SUV) boasts a new, authentic and more premium design, along with even more fuel-efficient powertrain options. Additional images and complete vehicle information will be available January 16, 2018, at the North American International Auto Show in Detroit.”

That doesn’t tell us a whole lot, but the pictures included with that short statement tell a far longer story.

As you can see in the image above, the split headlight design of the current Cherokee is gone and in its place is a far more traditional layout. The fog lights now sit in the spot where the current design has its lower headlight component and the headlights are one solid unit. The interesting aspect of this new design is that the basic feel of the current headlights, with the LED trim running along the top of the lens, has been preserved, but the larger overall headlight assembly “fits” better with the rest of the current Jeep lineup.

In a few weeks, we will know everything that there is to know about the refreshed 2019 Jeep Cherokee, but for now, those folks who didn’t like the 2014-2018 front end should be far happier with the new face of the midsized SUV.

Paul wrote on March 10, 2018 - 6:17am Permalink
Not crazy about the new look for the 2019 Jeep Cherokee Trailhawk the front grill and bumper look very cheap no third row lights either they could have made it much better looking now it looks like every other cheap midsize SUV out there last words no thanks to the new Trailhawk.