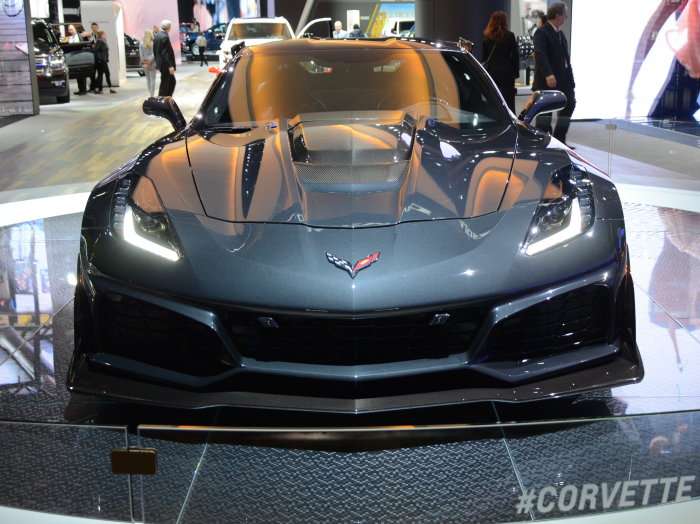 Chevrolet has just published a video of the 2019 Corvette ZR1 lapping Virginia International Raceway in just 2:37.25, beating the recently-announced record set by the Ford GT by more than a second.
Advertisement

Ford Motor Company execs have stated in the past that they don’t see the need to chase lap records, but earlier this week, we learned that the Ford GT road car had set a new lap record on the Virginia International Raceway Grand Course West. The EcoBoost’d Ford supercar lapped the 4.1-mile course in just 2:38.62, breaking the record set by the Dodge Viper ACR back in 2015 of 2:40.02.

Unfortunately for Ford and its fans, the GT lap record didn’t last long, as Chevrolet has rolled out a video of the C7 Corvette ZR1 lapping VIR in just 2:37.25 – setting a new lap record.

The ZR1 is Incredible
If you are reading this, the odds are good that you know all of the key details of the 2019 Chevrolet Corvette ZR1, but just in case, here is a quick rundown.

Under the hood is the new supercharged LT5 V8, offering 755 horsepower and 715 lb-ft of torque. This particular ZR1 is fitted with the 8-speed automatic transmission along with the ZTK Performance Package, which adds a larger front splitter, the massive adjustable rear wing, Michelin Pilot Sport Cup 2 tires and specific tuning for the Magnetic Ride Control suspension system.

Of course, in addition to the supercharged V8, the unique suspension settings, the stickier tires and the big aero kit, the 2019 Corvette ZR1 has a unique front fascia with huge cooling ducts, the ZR1-specific hood and other aero upgrades (compared to the Z06).

The First of Many Records
In the video above, we ride along in a 2019 Corvette ZR1 as GM engineer and lap time record-setting expert Jim Mero blasts around VIR. The footage is captured by the optional Performance Data Recorder system that GM offers in a variety of models, giving us a look at the full telemetry of vehicle inputs, the speed, engine RPM, gear selection and more. This system allows Chevrolet to offer up great footage like this, and over the course of the next year or so – I would bet that we see more in-car videos of the new ZR1 setting lap records around the world.

Most importantly, this built-in camera system might record the 2019 Corvette ZR1 as it sets the new Nurburgring production road car lap record. There has been no official word on this from GM, but our safe money says that we will see the Corvette at least take a shot at the American Nurburgring record of 7:01, which was set last year by the Dodge Viper ACR.

That Viper set the VIR Grand West record back in 2015 with a time of 2:40.02. The Corvette ZR1’s lap record at VIR beat the Viper’s record by almost three seconds. The Corvette has a big advantage in power over the Viper and an even bigger advantage in the tire department, so there is a very good chance that the ZR1 will beat the Viper’s Ring time while becoming the first American road car to run in the 6-minute range. Do you think that the C7 ZR1 will break the 6-minute barrier at the Ring? Tell us in the comments below.

In the meantime, enjoy the video below of the Corvette ZR1 setting a new VIR record.

LG's New EV Battery Plant Is a Welcome News for Tesla
Tesla Giga Berlin's New Hurdle: It's Not Only the Gov't, but Now Tesla Itself
END_OF_DOCUMENT_TOKEN_TO_BE_REPLACED