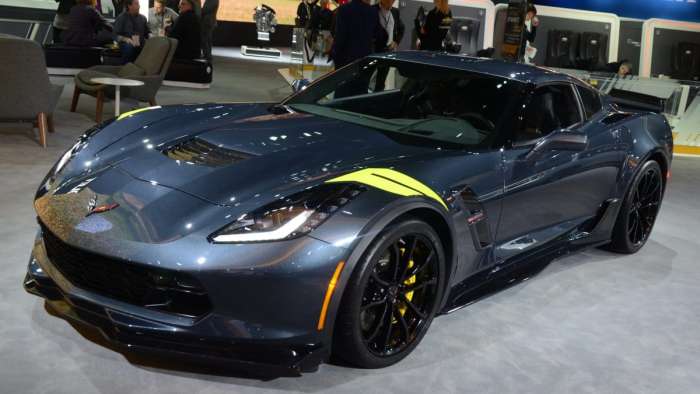 There is no other information available, but the schedule of events for this weekend’s Rolex 24 festivities includes the introduction of a 2019 Chevrolet Corvette Special Edition – which could be some sort of final-edition package celebrating the C7 ahead of the expected mid-engine debut later this year.
Advertisement

Chevrolet hasn’t had much to say about the Corvette since the introduction of the ZR1, but it looks as though the company will introduce a “special edition” package on January 25th. Discovered by the folks at Corvette Blogger, this mysterious Chevy sports car will be unveiled at 11:30am in the Corvette Experience area at the Rolex 24 Hours of Daytona.

None of the Corvette experts online seem to know what this special edition vehicle will be and there has been no word from GM, so we don’t know what we will see on Friday, but it will likely feature racing inspiration.

Not a Mid-Engine Car
The company has been testing what appears to be the mid-engine Corvette race car in Florida, leading some people online to suggest that this news from Daytona could pertain to the next generation, but it seems unlikely that they would call a race car or a next-generation model “2019 Special Edition”. It is one thing to be optimistic and it is another to be unrealistic – and believing that the C8, mid-engine Corvette will debut at an endurance race is unrealistic. It is just too big of news to bury the debut, even the debut of the race car variant, at an event that doesn’t get broad media or public attention.

Special Edition 2019 Corvette
It is far more likely that that Chevrolet announces on Friday will be some raced-up version of one of the current Corvette packages. Based on past special edition packages and in looking at the option packages already available for 2019, it seems likely that the announcement will pertain to some racing-inspired appearance package. It could be something with lots of exposed carbon fiber on the premium aero kits for the Z06 and/or ZR1, or it could be a package inspired by the Corvette Racing team cars.

In any case, by this time Friday, we will know what Chevrolet has planned for the 2019 Corvette in terms of the first special edition package.