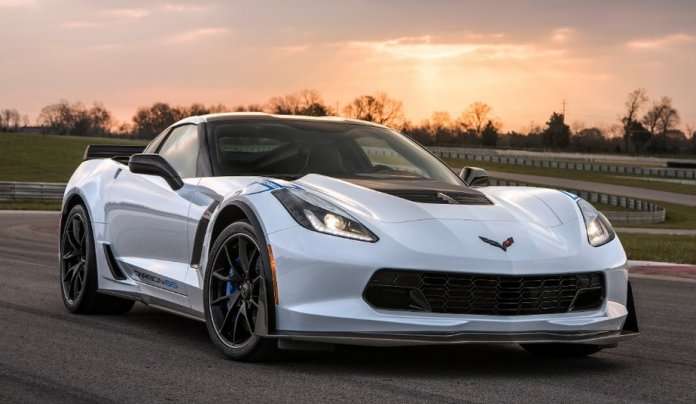 According to the Bowling Green Daily News, the 2018 Chevrolet Corvette will only be built for a few months before the plant in Kentucky begins building the 2019 Corvette during the final week of January 2018 – leading to an extremely short 2018 model year.
Advertisement

It has long been expected that Chevrolet will soon introduced two new high performance Corvettes – the C7 Corvette ZR1 and the mid-engine Corvette which may or may not be called the Zora. It has also been expected that one or both of these cars could debut at the 2018 North American International Auto Show in Detroit in January, which means that they could both arrive for the 2019 model year. (By the way, here is how the C7 Corvette Z06 and ZR1 might differ).

All of those expectations just got a little more reasonable, as the Bowling Green Daily News has reported that after production of the 2018 Chevrolet Corvette begins at the Bowling Green Assembly Plant on November 6th, that run will only continue through January 22nd. This report goes on to explain that when production starts back up on January 29th, the workers will be building 2019 Corvettes – which might include the mid-engine car and/or the C7 ZR1.

2018 Corvette Production Plans
The Bowling Green Assembly Plant in Kentucky has been offline since July and during this time, those folks in the plant have been working to finish the new paint booth and upgrade the assembly line rather than building Corvettes. Summer downtime is routine, but this stoppage at Bowling Green plant has been longer than usual and while we know that they are working on the new paint booth, there is also some retooling work being done to prepare for the 2018 model year production. It is rumored that this assembly line retooling is more extensive than usual because workers are preparing for the new ZR1 or the mid-engine Corvette.

That makes for an extremely short production run for the 2018 Corvette and as a result, there could be less than 10,000 examples made for the 2018 model year. This could drive up the value of those models down the road, while making it a little harder to get a new Corvette right away.

The 2019 Corvette Cometh
While we don’t know for sure what the 2019 model year will hold for the Chevrolet Corvette, it will almost certainly be something special. After all, the company wouldn’t bother to end 2018 production and begin 2019 production so early in the 2018 calendar year without a good reason. We are hoping that the good reason is the C7 Corvette ZR1 – or whatever the next high performance model is called – and/or the formal introduction of the long-rumored mid-engine Corvette.

Of course, General Motors won’t offer any comment on any of this 2018 and 2019 Corvette production talk, but if the 2019 model really is going to begin production in late January 2018 – we are surely in for something exciting. Also, if production begins that soon, we are almost guaranteed to learn more about the 2019 Corvette no later than the Detroit Auto Show in January, although Chevrolet could introduce the next, great Corvette at the LA Auto Show in November.