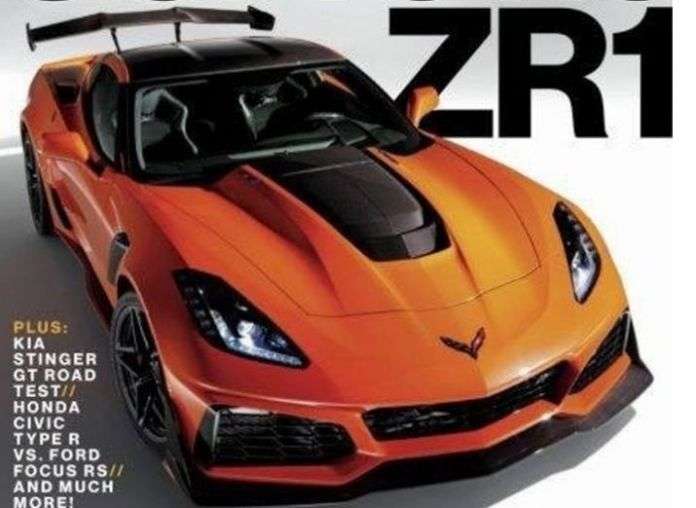 After getting our first look at the 2019 Chevrolet Corvette ZR1 via the leaked Car & Driver cover, more details from the article inside of the magazine have arrived online – offering us information on the price, the torque levels, the curb weight and many of the other features which make this C7 better than the Z06.
Advertisement

After years of speculation, we finally got the first real look at the 2019 Chevrolet Corvette ZR1. While the new ZR1 is expected to make its US debut later this month at the LA Auto Show, the information on the newest supercharged Vette will be included in the December issue of Car & Driver. Fortunately, someone got ahold of one of those magazines early, so shortly after the new ZR1 was introduced on the cover of Car & Driver – the juicy details on the upcoming American supercar were also posted online.

If you missed our first piece on the Car & Driver cover leak of the 2019 Corvette ZR1, click here to check that out.

If all of this information on the 2019 Chevrolet Corvette ZR1 proves to be true – and we think that it will be – there won’t be much left to learn about the next evolution of the C7 when it makes it grand debut, but who cares? In the age of information, nobody wants to wait for details on a new high performance vehicle, so here is everything that you really want to know about the new Corvette ZR1.

2019 Corvette ZR1 Drivetrain Details
According to the information from CorvetteBlogger, the 2019 Chevrolet Corvette ZR1 will be powered by a new, Eaton-supercharged LT5 which will deliver 750 horsepower and 680lb-ft of torque. The power will be sent to the rear wheels by means of a 7-speed manual transmission or an 8-speed automatic. Yes, we are also surprised that it doesn’t get the ZL1’s 10-speed automatic gearbox. The Eaton supercharger on the ZR1 moves 52% more air than the unit on the Z06 while also being 2.9 inches taller – leading to the unique hood bulge that we saw on the magazine cover – and fuel delivery is provided by port injection and direct injection.

Most importantly, the 2019 Corvette ZR1 will have 4 addiitonal heat exchangers, so this Chevy supercar shouldn’t have any of the overheating issues that plague track-going Z06 owners.

Helping the 2019 Corvette ZR1 to comfortably out-handle the Z06 is standard Magnetic Ride Control, a standard Carbon Ceramic braking system, front wheels that are a half-inch wider than the rollers on the Z06.

Performance numbers for the 2019 ZR1 include a 0-60 time under 3-seconds, a quarter mile time under 11-seconds, a top speed of at least 210 miles per hour and a lap time around Virginia International Raceway that is 2.5-seconds quicker than the Z06.

Other ZR1 Details
According to Corvette Blogger, the 2019 ZR1 will have a curb weight of 3,664lbs, 140lbs heavier than the Z06 and it retains the removable hard top.
Due to the high-rise hood, the ZR1 will not be legal for sale in Europe, but in the US, the price will start around $120,000.

There will be multiple aerodynamics packages for the new ZR1, including RPO ZTK, which is shown on the magazine cover with the massive rear wing. That big rear wing has 10 adjustable settings and at its most aggressive position, it creates 500lbs of downforce.
The smaller rear wing that has been captured in spy shots is the standard piece, but all of the rear wings are connected behind the hatch, with the aero loads being spread across the rear bumper beam.

Again, it is expected that the 2019 Corvette ZR1 will debut online on November 12th, followed by a formal US debut at the LA Auto Show in late November and early December.