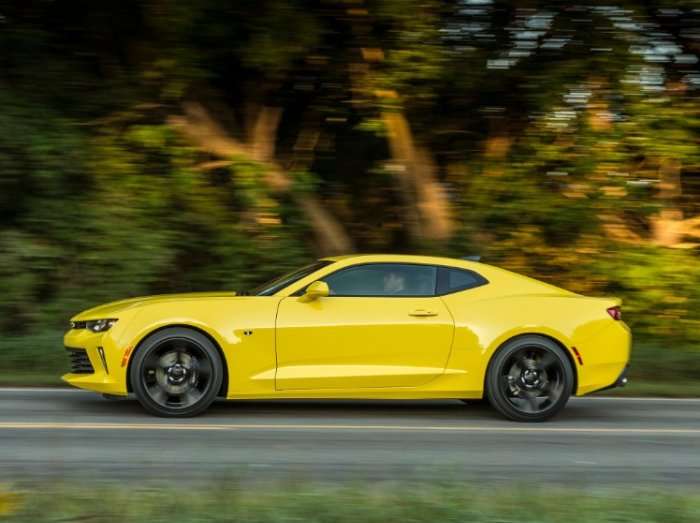 It is expected that General Motors will introduce a refreshed 2019 Chevrolet Camaro later this year and when that new muscle car arrives, it needs to have more power to go with the new look if GM really wants to take a shot at the Ford Mustang in the sales race.
Advertisement

The Chevrolet Camaro isn’t selling well. In fact, the Chevy muscle car is posted some of the worst monthly sales numbers since returning late in 2009 for the 2010 model year, so it comes as little surprise that the 6th generation Camaro – introduced for 2016 – is already getting an exterior refresh for the 2019 model year.

Unfortunately, GM hasn’t offered up any information on the 2019 Chevrolet Camaro, but based on spy shots and rumors, we can make some guesses as to what to expect when the refreshed muscle car debuts.

New Face and Tail
First and foremost, it seems as though the 2019 Chevrolet Camaro will be getting a new front end and a new rear end. This is rumored to include new headlights, new taillights, a larger grille opening, a new rear bumper design and possibly a new rear spoiler.
Overall, the lines will all remain the same, but new front and rear lights, new sculpting out back and a new grille up front should freshen up the look of the Camaro. However, I don’t think that new lights and some other mild design changes are going to put an end to the lengthy sales slump by Chevy’s muscle car.

Even if Chevrolet makes big changes to the exterior styling and interior layout – which they don’t appear to be doing – there needs to be another change to draw in buyers. The bottom line here is if GM really wants to increase the Camaro sales numbers relative to the Mustang and Challenger, the company needs to add more power so the volume models – particularly the entry-level 4-cylinder and the SS V8.

Why the Camaro Needs More Power
Since the Chevrolet Camaro returned for the 2010 model year, it has offered more power than the Mustang in its base, SS and premium forms. In 2010, the Camaro V6 had 304 horsepower and the SS model offered 426 horsepower, while the 2010 Mustang offered 210 horsepower in V6 form and 315 horsepower in GT trim.

Over the years, the Mustang would receive gradual power increases and by 2015, the V6 mustang was only 23 horsepower behind the V6 Camaro while the Mustang GT offered 9 more horsepower than the standard 2015 Camaro SS. It was around that time when Ford took the lead in the muscle car segment and the Motor Company hasn’t looked back since them, easily leading the segment in sales for the past three years.

GM likely expected to see that change when the 2016 Camaro SS was introduced with 455 from the then-new LT1 while the Mustang GT still “only” had 435 horsepower, but that power gap wasn’t enough to help the Camaro battle back against the Mustang. In fact, since the new Camaro hit the market, sales numbers have gotten progressively worse and this mild exterior refresh isn’t going to change that.

What will change things is a power jump for the 2019 Camaro in every trim.

More importantly, the 2019 Camaro SS needs an injection of power to stand apart from the 2018 Ford Mustang GT. If Chevy could bump the power of the LT1 up into the range of 490 horsepower, it would offer more horsepower than the Mustang GT (460) and the Challenger SRT 392 (485). Also, based on the current output of the LT1, a bump to 490 horsepower would likely lead to a similar increase in torque, so with somewhere in the area of 490 lb-ft of torque, the new Camaro would offer a little more torque than the 392 Hemi-powered challengers (475) and gobs more torque than the 2018 Mustang GT (420).

Of course, Chevrolet might just go with the new exterior design and the new 10-speed transmission, but if that is the extent of the 2019 Camaro refresh – we can expect to see the Mustang and Challenger control muscle car sales.

Prashant wrote on March 21, 2018 - 8:46am Permalink
Camaro needs to have the right pricing. Cut down pricing on each trip by $5000. The 2.0 turbo can be a great competitor for Civic si. Anyone looking for a 20k performance tuner car would consider the Camaro instead of writing it off. Base SS for 31k.
Tom wrote on March 22, 2018 - 9:14am Permalink
Price, not power is the problem. The Camaro SS is still quicker than the Mustang GT Zero to 60 the SS wins by .3 sec, 4.1 sec. to 4.4 sec. respectively. Its the price also, I think the the gen 6 Camaro did not look that much different from the gen 5. I bought a gen 6 ss (traded in my gen 5 V6) because of the LT1 engine. Was not interested in the underpowered 4 cylinder and already had the V6 . The Vette motor was the reason I switched to the new model. I think a refreshed body might actually help, like I said the Gen 6 isn't that much different looking from the Gen 5 So the only reason to buy the new Camaro was the LT1 I.M.O.
john sarty wrote on March 21, 2018 - 8:52am Permalink
It doesn't need more power...GM needs to lower prices if they want the Camaro to top sales again.
John wrote on March 21, 2018 - 8:57am Permalink
I agree. GM needs to lower prices to help sales. New Chevy Camaro vehicles are overpriced.
Jon wrote on March 21, 2018 - 8:59am Permalink
I think it's more of a price thing than a power thing. Most people buy the base model not because of the engine, but because they want a sports car look but when a Mustang is cheaper they choose Ford.
Jason wrote on March 21, 2018 - 9:07am Permalink
Price. Quick search (And I mean a quick search with only one dealership each, one chevy, one ford, and one dodge) shows 2018 v8 Camaro $40K, 2018 v8 Mustang $33K, 2018 v8 Dodge Challenger $37K . That right there is why Camaro's are not selling properly.
Jesse wrote on March 21, 2018 - 2:22pm Permalink
As a 60 someone, my Camaro comparison begins with the first generation models. The 2010-2018 generation looks nothing like the original. The roof is too low, it’s cramped inside, and visibility is poor. So GM wants to change the front and rear facia to address slow sales. The problem with the Camaro is what’s between the front and rear facia. Since we aren’t going back to the upright styling of the first generation, my suggestion is to use the second generation as a styling template for an appearance update. I highly recommend GM revisit the 70 1/2 Camaro Z-28 with the split bumper styling. A full bumper was available on the base and SS models. The second generation was aerodynamic but had a sculpted hood that flowed into the front fenders. The second generation styling was exceptional until GM put on those gaudy bumpers to meet federal regulations. I encourage readers to visit the second generation Camaro with pictures found online. You will be rewarded with styling you never knew existed, especially the ‘71 & ‘72 model years!
Don Bjorkland wrote on March 21, 2018 - 6:54pm Permalink
The high content high horse V6 should not be dropped. GM should just squeeze more hp out the the 4 banger. Mustang dropped the V6 because it was a POS motor. Camaro needs to also be less money and less content than the competition. Give the Camaro the 10 speed across the board, a minor horsepower increase in the SS. The cars will sell if all of the above are done.
Mackey wrote on March 23, 2018 - 1:54pm Permalink
No, Chevy does not need to copy Ford and kill the V6. Alot of people like driving naturally aspirated cars. The 3.6L Camaro six cylinder is far superior to the Ford 3.7L V6. GM can and should increase the power in their turbo 4 banger to compete with the Ecoboost 2.3L. Also, word has it that GM is working to re-arrange their option packaging to make the price of entry for the Camaro more appealing.
Mackey wrote on March 23, 2018 - 2:06pm Permalink
"so it comes as little surprise that the 6th generation Camaro – introduced for 2016 – is already getting an exterior refresh for the 2019 model year." Mustang received a refresh after only 3 model years too (introduced 2015 model year-refreshed 2018 model year).
Blah wrote on March 25, 2018 - 10:52am Permalink
They also need to make the car look less boy racerish and improve visability.