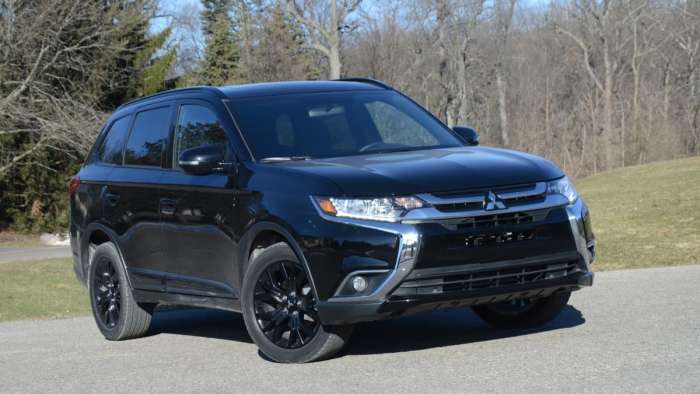 Mitsubishi turned their corporate focus to SUVs well before the American automakers and in spending a week driving the 2018 Outlander LE S-AWC, I found that the tiny Japanese company has made the right move – offering a mid-sized, three-row SUV that comes nicely-appointed with all-wheel-drive for under $30,000.
Advertisement

In the past few years, I have found that many American drivers are unaware that the Mitsubishi brand still exists. Many of their dealerships around the country have closed in the past decade as the company has opted to kill off the most popular models, such as the Eclipse and the Galant. A while back, Mitsubishi decided to leave behind their days of building fun-to-drive, sporty compact cars in order to focus on SUVs.

That departure from the familiar models caused many people to forget about the small Japanese automaker, but if you are shopping for a mid-sized SUV with seating for 7, all-wheel-drive and an infotainment system with all of the modern amenities, the Outlander LE S-AWC is a solid option with a price-as-tested of just $29.060.

Test Vehicle Pricing
Before getting into my full review of the 2018 Mitsubishi Outlander LE S-AWC, here is a quick look at the pricing. The LE S-AWC package sits in the middle of the Outlander lineup, sitting below the SEL and the GT. It comes nicely appointed in terms of interior tech, but it does not come with leather seats. It does, however, come with a 2.4-liter 4-cylinder engine, a CVT transmission and the company’s Super All-Wheel-Control all-wheel-drive system. The only option in my test vehicle is the $125 floor mats, so everything else discussed below is standard equipment. This vehicle has an MSRP of $27,995, so when you add on the cost of the floor mats and the unavoidable $940 destination fee, we have a price-as-tested of $29,060. That is less than the price of the base model of some of the more popular mid-sized SUVs on sale today, so if you are shopping for a three-row SUV on a budget without skimping on options, the Outlander LE S-AWC is one of the best options on the market.

Big Interior in a Small SUV
While some outlets try to classify the 2018 Mitsubishi Outlander as a compact model, it is actually a smallish mid-sized SUV. While it is smaller than some other mid-sized SUVs, it has a rare feature in the class – a third row of seats. The fact that this smallish SUV has three rows of seating and space for seven people should make it clear that this cabin is roomier than you might expect of a vehicle with the exterior footprint of the Outlander LE S-AWC. The front bucket seats and the outboard seats in the second row all offer an impressive amount of leg, knee, hip, shoulder, elbow and head space, even for taller adults. Many mid-sized SUVs have second-row seats that are tightly packed against the back of the front seats, leaving no room for second-row leg space, but the Outlander can comfortably seat adults in the second first and second row outboard positions. I specify the second-row outboard positions, because the center seat is very narrow and not contoured like the other seats, so it isn’t very comfortable for adults, so putting three normally-sized adults in the second row is going to create a very cramped situation. Also, while the third row of seats is great for small kids, it is way too tight for adults, so while this is a seven passenger vehicle, it is ideal for four adults and three small kids or two adults and five kids, but in any case, the Outlander will carry more people than most mid-sized SUVs. Best of all, Mitsubishi managed to preserve some cargo space behind the third-row seats, so when you fold down the rear seats, the Outlander has a surprisingly large cargo area. In other words, as smaller mid-sized SUVs go, the Outlander offers a combination of passenger space and cargo capacity that is hard to find in the segment. The Gadgets You Want
Many mid-sized SUVs cost upwards of $40,000 because they are packed full of high tech goodies, many of which go unused by many owners. The Mitsubishi Outlander LE S-AWC comes standard with the modern features that buyers want, such as a 7-inch infotainment screen with dual USB inputs, Bluetooth connectivity and Apple CarPlay and Android Auto compatibility. This system uses voice recognition, buttons on the steering wheel and the large touchscreen to control the audio system and the hands-free phone system, both of which are features that almost every driver uses with some regularity. The screen is big, bright and easy to use, allowing you to easily change the radio station or access your smart phone with touch controls, but the basics can all be done with your voice or the steering wheel buttons.

The steering wheel also has controls for the driver information screen in the middle of the analog gauge cluster, allowing the driver to easily pop between the different readouts, one of which is an “eco coach” with leaves that grow as you drive in a fuel-friendly manner. Also, the Outlander LE S-AWC comes with dual zone climate control that is adjusted by a dedicated panel below the touchscreen, making climate changes simple from either of the front seats. The only thing missing from this Outlander that I really missed was navigation, but with so many people becoming comfortable with the navigation apps on their smart phones, this is a feature that many people can do without. Of course, some people would like heated seats and/or leather seating surfaces, but if you are focused on shopping on a budget, those are compromises that can be made when you consider what you get for the money.

The Drive
The 2018 Mitsubishi Outlander LE S-AWC is powered by a 2.4-liter 4-cylinder engine that offers 166 horsepower and 162 lb-ft of torque, with that power being channeled towards all four wheels by means of a continuously variable transmission (CVT) and the company’s Super All-Wheel-Control system which is just a fancy name for advanced all-wheel-drive. Those power numbers aren’t going to turn any heads, but the MiVEC engine packs enough power to make the Outlander much quicker than I expected. Frankly, I expected the Outlander with the CVT to be a terribly boring, unpleasant drive, but it is actually a far sportier-driving vehicle than the numbers would suggest. The gearing of the CVT makes it quick from a stop and when cruising on the highway, you can put the hammer down and build the speed needed to rush around slower-moving traffic. Mind you, I don’t think that any Outlander owners are going to take their SUV racing, but in a segment where so many vehicles are terribly boring on the road, the Mitsubishi Outlander is surprisingly spry around town and on the open road.

One thing that the Outlander lacks compared to some pricier mid-sized SUVs is sound insulation. This Mitsubishi is a bit noisier inside when driving at highway speeds, with both wind noise and the harshness of the road surface being audible in the cabin. However, while there is more interior noise than some competitive models, the noise is not excessive by any stretch.

The suspension is on the stiffer side, making the Outlander a bit more capable on rough, unpaved roads, but it is plenty smooth enough for the daily drive. As mentioned above, the Outlander handles better than I would expect from a high-riding SUV, but as is to be expected, there is some body roll on hard, higher speed corners. That being said, I don’t imagine that many Outlander owners are going road racing and the body roll is barely noticeable as “normal” speeds. Overall, I enjoyed driving the Outlander LE S-AWC around town and on the highway, with the CVT’s programed shifts providing a little more driving excitement while also giving me more control of how the 2.4-liter engine delivered its power on the road. As for fuel economy, the Outlander LE S-AWC turns in solid numbers there as well, with EPA ratings of 24mpg around town, 29 on the highway and 26 combined. During my 8 days driving the Outlander, I did more highway driving and I averaged closer to 27 miles per gallon, while also seeing 30+ miles per gallon when cruising on the local highways at the speed limit.

The Final Word
The 2018 Mitsubishi Outlander LE S-AWC is not the most technologically advanced vehicle in the class, but as vehicles with an MSRP under $30,000 go, this three-row SUV comes with the key features that you expect from a modern vehicle. When you add in the advanced all-wheel-drive system and the roomy cabin, the Outlander offers a lot of car for the money as Mitsubishi focuses more on value and bang-for-the-buck than on glitz and glamor. The Outlander LE might not impress the neighbors, but on a dollar-for-dollar basis, there are no SUVs that offer three rows of seating and the key technology for such a low price point.