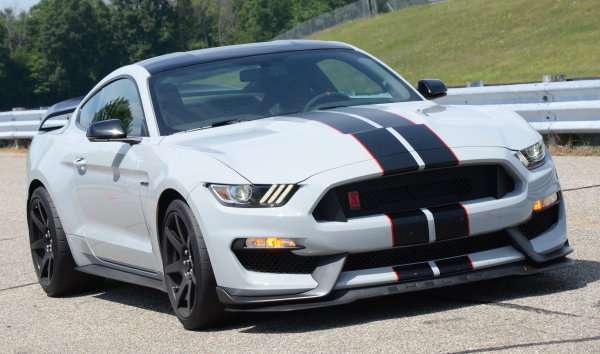 Leaked dealership documents acquired by the team at Mustang6g.com states that the Ford Shelby GT350 Mustang will return for the 2018 model year and it will do so in pretty much the same form as the current models – with the exception of a few new exterior colors.
Advertisement

It is widely expected that the 2018 Ford Mustang will get some improvements over 2017 models, which includes (but is not limited to) new suspension, a new transmission and a revised headlight design. Thanks to the crew at Mustang6g.com, we also know that the 2018 Mustang will still feature the Shelby GT350 and GT350R models, but it seems that these high performance packages won’t benefit from the exterior changes rumored for the rest of the 2018 Mustang lineup.

That is ok through, as the 2018 Ford Shelby GT350R Mustang will still be one of the most aggressive and best performing cars sold in the US – especially for the price – while also getting a trio of new colors for the 2018 model year.

The 2018 Shelby GT350 Mustang Information
Ford Motor Company has not offered any official information on the 2018 Mustang in any form, but a member of the Mustang6g.com forum got his or her hands on a dealership document which outlines the enrollment process for the 2018 model year Shelby Mustang. Dated 12-19-2016, this document explains what dealerships have to do in order to be permitted to sell the GT350 and GT350R Mustangs, while also explaining the allocation process for the 2018 Shelby models.

It costs each dealership $1,000 for the right to sell the 2018 Shelby GT350/GT350R Mustang, and that cost covers things like marketing materials, training on how to sell these high performance muscle cars and enrollment in the 2018 model year sales program…none of which really matters to most consumers.

2018 Shelby Mustang Changes
What does matter to consumers is one simple line item on the dealership document, which reads “The only changes to the 2018 Shelby GT350/GT350R will be exterior colors. All other functional, exterior and interior content will be carryover from 2017MY. Final color lineup will be announced at a later date.”

In other words, it seems as though any design changes to the headlights of the 2018 Ford Mustang will not apply to the Shelby GT350 models, leading me to wonder if we will actually see this facelift for the non-Shelby models in 2018 or if the company will hold off with that until 2019. In any case, if the 2018 Mustang gets any appearance chances on the outside, it sounds as though the Shelby models won’t feature those changes.

As for the exterior colors, this dealership document didn’t offer any details on the 2018 Shelby Mustang colors, but according to Mustang6g.com, Kona Blue, Lead Foot Gray and Orange Fury are all possible additions for 2018 –but we won’t know for sure until information on the 2018 models are officially announced by Ford Motor Company.

In the meantime, the news that the Shelby GT350 and GT350R Mustangs will be offered for 2018 gives prospective buyers one more chance to score the best-handling factory-built Ford Mustang ever should be of interest to anyone who missed out on buying a new Shelby Mustang in 2016 or 2017.