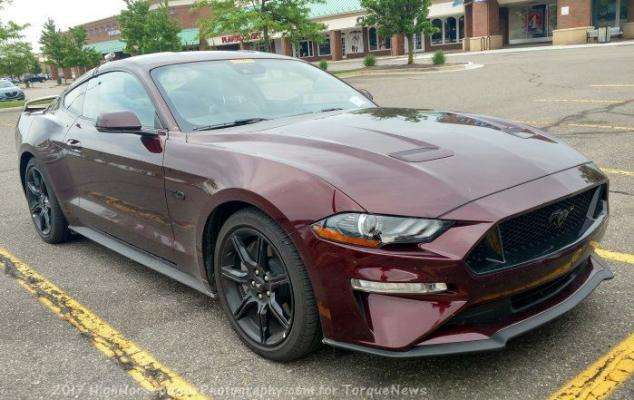 Last night, I spent some time driving in traffic behind the 2018 Ford Mustang GT test car in Royal Crimson with black trim and a while later, I came out of a restaurant to find the new Motor Company muscle car parked next to my truck – which gave me a chance to snap some clear pictures of the refreshed car in its new exterior hue.
Advertisement

Ford Motor Company has been showing off the refreshed 2018 Ford Mustang GT since January, but the majority of the new-look muscle cars have been bright orange, blue or gray – including the vehicles at major auto shows and the images on Ford’s website. We know that the 2018 Mustang will be offered in a new color called Royal Crimson, but the company hasn’t shown that new color off just yet.

Fortunately, while heading to dinner last night, I stumbled across a 2018 Ford Mustang GT in Royal Crimson and a short time later, I found that same FoMoCo test car parked next to my truck.

Cruising with the 2018 Mustang GT
My wife and I headed out to dinner last night and while driving through Novi, Michigan, we came across the 2018 Ford Mustang GT shown in the picture above in traffic. We spend a few miles behind the new Mustang, during which time we got to hear the 5.0L V8 grumble through the new active exhaust system. The driver never pushed the car hard, but even rolling out from a stop at light throttle, the new Mustang has a great tone to it. As advertised, the new active exhaust system allows the 5.0L v8 to crackle and pop when the driver rolls in and out of the throttle, presenting a very “aftermarket feel” to the 2018 Mustang GT.

After riding around behind the Royal Crimson 2018 Ford Mustang GT for a while, which included some odd paths through shopping plazas, he headed off in a different direction and we continued on to dinner. Imagine my surprise when we came out of the restaurant, and parked next to our truck was that very same 2018 Ford Mustang GT. There was no one around, so we looked the car over, snapped a few pictures and headed on our way. As you can see in the pictures, Royal Crimson is much darker than the currently-offered Ruby Red, pushing this shade into the range of purple rather than red. However, when you add on the black badges, the black grille, the black taillight panel and the black wheels – Royal Crimson gives the 2018 Mustang GT a dark, menacing look.

While some people don’t love the refreshed front end, I think that it is a good evolutionary step for the S550 Ford Mustang. The elongated nose gives the car an angry look, while the angular lower front fascia enhances the overall sporty feel of the 2018 front end. Right now, I don’t like it as much as I like the current front end, but I will bet a shiny nickel that the critics will slowly quiet down and this Mustang will contribute to the ongoing sales success that the new generation of the legendary pony car has enjoyed over the past few years.

For Some Former Daimler Managers Daimler Is Authority, While Tesla Is Like a Startup
How Daimler Unintentionally Subsidizes Tesla Giga Berlin
END_OF_DOCUMENT_TOKEN_TO_BE_REPLACED