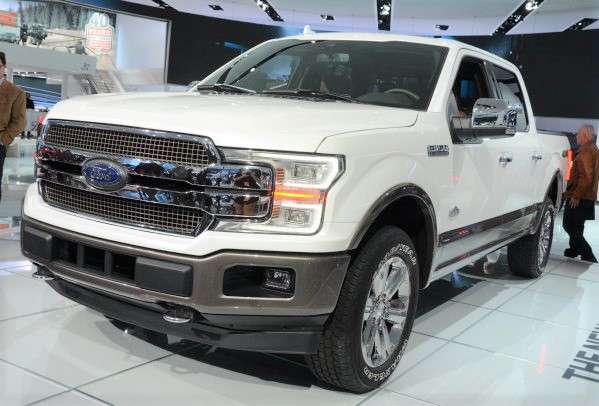 The 2018 Ford F150 is on display right now at the 2017 North American International Auto Show in Detroit, and with a handful of new trucks lined up next to the models currently on sale, I think that many attendees will agree that this refresh is a good one.
Advertisement

Considering that the current Ford F150 was introduced for the 2015 model year, some people are surprised that the Motor Company would restyle their bestselling trucks so soon. Based on the test trucks caught on the road with heavy camouflage covering the front end, we knew that a refresh was coming, but I have to admit that I am surprised to see it come so soon.

Fortunately, having checked out the 2018 Ford F150 in person at the 2017 NAIAS, I think that this quick refresh is a good one and it will be well received by the consumer market.

2018 F150 at NAIAS
Ford Motor Company has a huge collection of F150 pickups in their display at the 2017 North American International Auto Show in Detroit’s Cobo Hall, offering attendees a chance to see the current 2017 F150 alongside the restyled 2018 models. The 2018 F150 was displayed in King Ranch, Lariat and XLT trim, presenting the new grille in three different forms between the larger LED-trimmed headlights.

When you compare the 2018 F150 to the 2017 F150, the similarities are clear, but this new design gives the premium trimlines trucks a more luxurious look while the less expensive XLT model has a far sportier look with the grey painted central grille bars. Really, I would imagine that the average driver might have a hard time telling at a passing glance whether an F150 is from the 2017 or 2018 model year, but in the end, the new F150 gets more chrome and even bolder headlights.

Out back, the changes are far less noticeable, but I like the look of the new, slightly larger LED taillights and the addition of the F150 emblem stamped into the tailgate is a nice touch.

In the effort to design a signature lighting look, the 2018 F150 will definitely stand out alongside all of the competitors, but the changes for the new model year are subtle enough that they shouldn’t turn away anyone who prefers the look of the 2015-2017 F150.

The 2018 F150 is on display in a variety of timelines at the ongoing 2017 Detroit Auto Show and it will continue to be available to the public through the end of the show on Sunday, January 22nd.

If you are considering buying a new Ford F150 right now and you live close enough to Detroit to visit the 2017 North American International Auto Show, I would recommend making a trip to see the 2018 F150 in person before making a purchase.

At first glance, I believe that Ford has taken everything good about the current F150 and improved on it for 2018 – so people shopping right now might want to wait a few months and go with the refreshed F150.