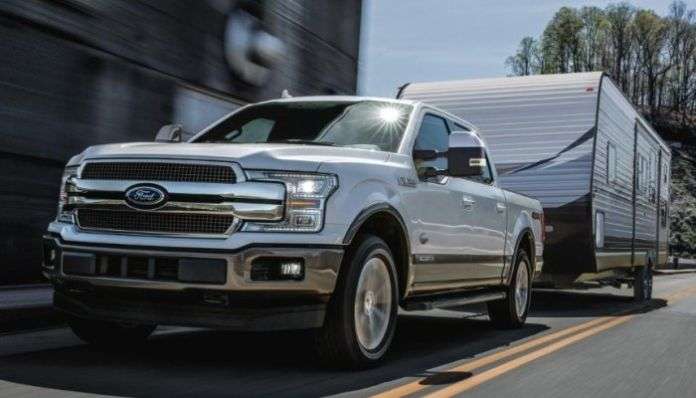 Ford Motor Company has announced the specifications of the 2018 Ford F-150 with the new 3.0L Power Stroke diesel and as expected, it beats the Ram 1500 EcoDiesel in all of the key metrics – including horsepower, torque, fuel economy and towing capacity.
Advertisement

Almost a year ago, Ford Motor Company announced that the refreshed 2018 F150 would be their first half-ton pickup to sport a diesel engine and today, we finally have the most important numbers on that new powerplant. As we expected, the first diesel-powered F150 offers best-in-class towing, leading diesel half-ton horsepower and torque and the company is expecting a 30mpg highway rating – which would make it the most fuel-efficient half-ton sold in the USA.

“For every truck owner who wants strong fuel economy while they tow and haul, we offer a new 3.0-liter Power Stroke V6 engine that dreams are made of,” said Dave Filipe, vice president global powertrain engineering. “The more you tow and the longer you haul, the more you’ll appreciate its class-leading towing and payload capacity and how efficient it is at the pump.”

The F150 Power Stroke
We have known for some time that the 2018 Ford F150 would be powered by a new 3.0L Power Stroke turbocharged diesel and it was believed that this new mill would be similar to the Ford-developed 3.0L “Lion” diesel in the Range Rover. Today, that belief has been confirmed, as the new 3.0L Power Stroke will be built alongside the Lion diesel in Ford’s Dagenham engine plant in the United Kingdom. These two engines will share an engine block design, but the F150 will have a long list of unique parts including the turbocharger and the crankshaft.

More importantly, we learned today that the 2018 Ford F150 Power Stroke models will offer 250 horsepower and 440lb-ft of torque. That is slightly less power than the 254 horsepower offered by the Range Rover, but the torque output is the same. We also learned today that the new F150 fitted with the Power Stroke diesel will be able to tow 11,400 pounds – making it the strongest package in the half-ton segment. It will also haul 2,020 pounds, but the big number here is the towing capacity.

Finally, while the official EPA fuel economy numbers are not yet available, the Motor Company is targeting a highway fuel economy figure of 30 miles per gallon. If they can hit that number – and I expect that they will – the F150 will officially be half-ton pickup with the highest mile per gallon rating.

Power Stroke vs EcoDiesel
Prior to the arrival of the 2018 Ford F150 diesel, the only other half-ton diesel pickup in America is the Ram 1500 with the 3.0L EcoDiesel V6. That engine option offers 240 horsepower and 420lb-ft of torque while allowing the Ram pickup to tow 9,200lbs. The diesel Ram also offers the best mile per gallon rating of any half-ton truck sold in America with a very realistic figure of 27mpg.

Once the 2018 F150 with the new Power Stroke diesel engine arrives later this year, Ram will have to step up their game a bit, as the new Ford is going to take the lead in pretty much everything. The F150 will offer 10 more horsepower, 20lb-ft more torque and 2,200lbs more towing capacity. Also, even if the official EPA fuel economy number falls a point or two short of Ford’s expectations, the F150 will surpass the Ram in miles per gallon as well. At the same time, with Ford starting that they expect 30mpg, I would be surprised if they fall short with the EPA.

Availability and Pricing
Ford will begin taking orders for the diesel F150 later this month with the first units being delivered this spring. Once in the order banks, the new 3.0L diesel will cost about $4,000 more than a similar truck with the 2.7L EcoBoost, $3,000 more than the 5.0L V8 and $2,400 more than the 3.5L EcoBoost.

The new Power Stroke will be offered to the public in Lariat, King Ranch, Limited and Platinum trim F150 pickups, but fleet customers will be able to buy the lower-priced XL and XLT models with this new engine as well.