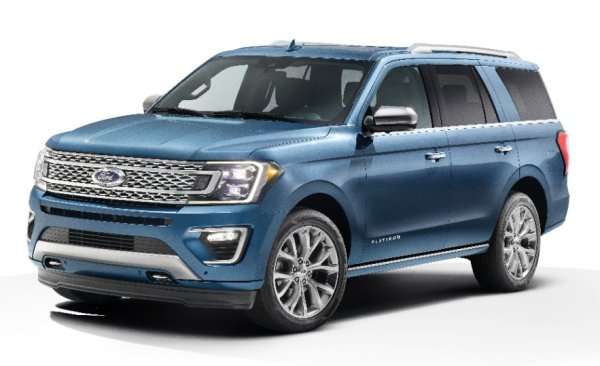 The 2018 Ford Expedition Gets an Aluminum Body, 10 Gears and More Premium Features

The 2018 Ford Expedition will debut this weekend at the 2017 Chicago Auto Show with a new aluminum body, a more premium exterior, a higher tech interior and the new 10-speed automatic transmission – all of which combine to make a great, large SUV even better in every way.
Advertisement

The Ford Expedition is one of the last few truck-based, body-on-frame sport utility vehicles sold in America the all-new 2018 Ford Expedition – which will debut this weekend at the 2017 Chicago Auto Show – will continue that tradition. However, the construction design is one of the few aspects of the current Expedition which hasn’t been refreshed for the 2018 model year.

“When Expedition was introduced 20 years ago, it set the standard for active families who simply needed a big and strong SUV to take them places,” said Joe Hinrichs, Ford president of The Americas. “Today’s families want even more smart technology to help them cover more ground safely, more efficiently and more comfortably – all while staying connected to friends and family.”

The Drivetrain
The 2018 Ford Expedition is only offered with one drivetrain, but the combination of the 3.5L EcoBoost V6 and the new 10-speed automatic transmission will make this new SUV more powerful, quicker and more efficient. We don’t get any specific details, but we can expect that the new EcoBoost V6 will offer at least a little more power than the current models, leading to improved performance across the board. We can also expect that the 10-speed transmission will make it quicker and more efficient – especially with the lightweight aluminum body.

New Aluminum Body
First and foremost, the 2018 Ford Expedition receives an all-new exterior design with the shell crafted from the same aluminum as the Ford F150 and the Ford F Series. That new aluminum body allowed Ford to cut roughly 300lbs from the body and while the materials from which the body is made will get the most attention - that is really the least significant change to the new Expedition.

Along the sides, the 2018 Ford Expedition has a bit higher top line, with slightly narrower windows and an angled C-pillar that gives it a more fluid look. Of course, the Expedition has huge bright polished aluminum wheels, chrome door handles, chrome electronic running boards and a chrome trim piece that runs around the top line of the body.

Finally, the back end of the new Expedition has huge LED taillights which are connected by a thick chrome trim piece – again looking like an enlarged Explorer.

All in all, I think that the exterior design of the 2018 Ford Expedition is a step in the right direction, and while the same critics of the aluminum F150 body will find fault with this aluminum Expedition – it has the makings of a great, large SUV.

A Luxurious Cabin
The 2018 Ford Expedition is an honest 7-person, 3-row SUV with cargo space to boot and with the new models, we can expect slightly more space in every dimension. However, the real star of the Expedition’s interior will be a long list of high tech features, such as the SYNC3 system, wireless charging, multiple power points throughout the vehicle, a rear seat entertainment system, a premium sound system from Bang and Olufsen, a panoramic glass roof, unique tilt and slide seats and a long list of standard safety features. Oh, the new Expedition will also serve as a WiFi hotspot, saving you and your kids data when driving around town or when on long trips.

The 2018 Ford Expedition will hit dealerships this fall. We can expect more information – including power figures, towing numbers and prices – once we get closer to the actual debut.