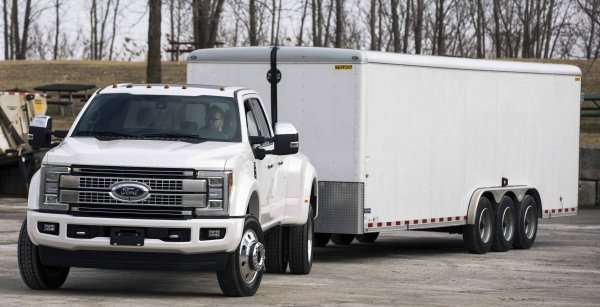 Ford Motor Company has announced the newest innovation on the 2017 Super Duty pickup with the introduction of the Trailer Reverse Guidance system, which uses 6 exterior cameras to make backing up with even a huge 5th wheel trailer much easier and much safer.
Advertisement

A key metric with heavy duty consumer grade pickups like the 2017 Ford Super Duty is towing and in addition to making the trucks more capable of pulling very heavy loads, Ford Motor Company puts just as much effort into making their trucks safer – including when those trucks are hooked up to a heavy load. The company introduced their new trailer backup assist system for the 2015 F150 and for the next generation Super Duty pickups, the automaker has created the new Trailer Reverse Guidance system.

This new system doesn’t assist the driver in backing up with a trailer in the same way as the F150, but it does provide the driver with a much better view from every angle thanks to a collection of 6 cameras scattered around the outside of the truck. Also, the Guidance system includes a trailer angle indicator that helps prevent drivers from getting into jack-knife situations when backing up with a big trailer hooked up.

Trailer Reverse Guidance
I manage a horse stable with my wife and one of our tow rigs is a Ford F350 with a 35 foot 5th wheel trailer. Rigs like this are very common in the horse world and while I am very comfortable maneuvering the lengthy combo in almost any driving situation, I have seen countless drivers with a large trailer get crossed up when trying to sneak in or out of a tight parking lot. Honestly, it can be tough to get used to watching the corners of the trailer some 50 feet away through the mirrors, which also making sure not to cut the front of the truck into something or getting too much trailer angle – which can cause the trailer to hit the back of the cab. If you ever see the rear of a truck cab crumpled about halfway between the roofline and the top of the bed – that person likely jackknifed their truck with a 5th wheel trailer.

Ford wants to help make backing up with a big trailer easier with the 2017 Super Duty F250 and F350, and they are doing so by making it a whole lot easier to see all around the truck and the trailer. The next gen Super Duty will feature rear-facing cameras in the side view mirrors, in the third brakelight housing on the back of the cab and in the tailgate handle, along with a front-facing camera in the grille and a component camera that you can mount on the back of your trailer – which is one of the coolest features of this system.

When you are backing up the 2017 Ford Super Duty, the side cameras give you a clear look of what is around the corners of the trailer while the camera in the tailgate handle monitors the trailer angle. The camera in the grille shows the driver how close the front end might be to any other vehicles or obstacles around the front of the truck and the 3rd brakelight camera provides a high angle view of the trailer, while also making hitching up a 5th wheel or gooseneck trailer even easier.

Finally, the 2017 Super Duty comes with a camera that you can mount on the back of the trailer, allowing you to see what is directly behind your trailer. This camera works with the infotainment touchscreen in the dash, right along with the rest of the cameras, and you can switch from view to view with the on-screen buttons.

Even with years of experience towing a variety of different trailers, I love the look of this new camera technology, as it will make moving around a big trailer easier and safer for both experienced and beginner truck drivers. When this system hits the market later this year, it will be the most advanced backup camera system in the market – giving Ford one more leg-up over the competition.

Check out the video below for a closer look at how the Trailer Reverse Guidance system works.