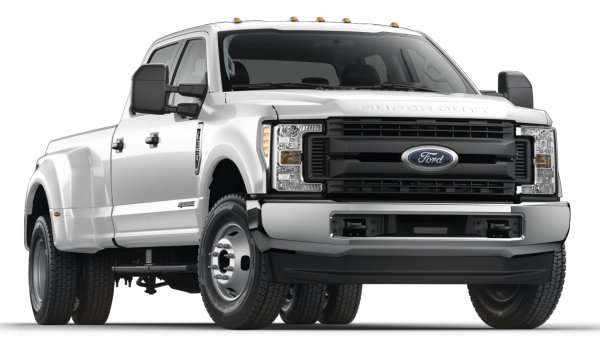 Ford Motor Company has issued a recall for roughly 8,000 examples of the new 2017 F250 and F350 Super Duty pickups over a concern that a problem with the gas tank straps could allow the tank to fall and contact the ground – increasing the likelihood of a fire, although there have been no reports incidents by private owners.
Advertisement

The 2017 Ford F250 and F350 pickups introduce a new generation of their bestselling Super Duty lineup, with the most significant feature being the lightweight, aluminum body. The newest Super Duty pickups are the most capable in the heavy duty consumer market, so it comes as no surprise that the company has already sold more than 8,000 examples of the new 2017 F250 and F350 before the end of 2016. Unfortunately, 8,000+ new Super Duty pickups are being recalled for a concern that the gas tank straps could fail and allow the tank to fall to the ground.

As you might imagine, if your gas tank straps fail, your gas tank can fall to the ground, but it won’t fall completely out, as the filler hose and fuel lines will keep the gas tank connected to the vehicle. However, should the straps fail while one of these trucks is being driven, dragging the tank against the ground at speed could cause the tank to fail. If the gas tank fails while moving, it would only take one spark to start a heck of a fire.

The good news is that Ford Motor Company has received no reports of any issues stemming from the gas tank straps failing in a 2017 F250 or F350, so it seems as though the automaker has caught this problem before any owners have experienced the issue first-hand.
The recall explains that “certain” 2017 Ford F250 and F350 Super Duty pickups are included and all of those trucks were built at the Kentucky Truck Plant between August 10th, 2016 and September 17th, 2016.

The fix seems fairly simple, as the dealership technician will inspect the gas tank straps of the new Super Duty pickup to make sure that they have the front reinforcement bracket and if one is not present – the dealership install a strap reinforcement which will prevent the straps from separating from the frame. This work will be performed free of charge and the work shouldn’t be all that time intensive, but I still always recommend that people drop their vehicles off and leave them there for the day to be fixed, regardless of the work being done.

Any recall is bad news for an automaker, but Ford caught this issue before any problems came of it and most importantly – this problem has nothing to do with the aluminum body.

If you own a 2017 Ford Super Duty pickup which you believe was built during the aforementioned time period, contact your local Ford dealership with your VIN handy to see if your truck is included in this recall. The reference number is 16S45.