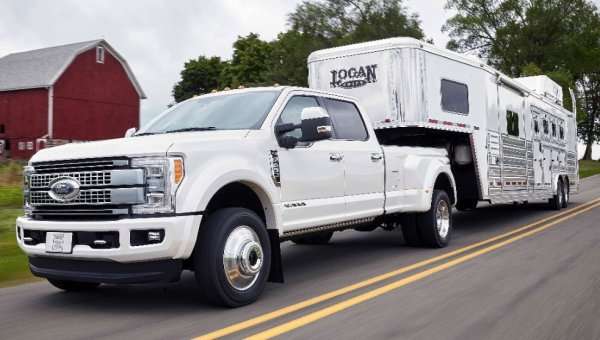 2017 Ford Super Duty Gets Best in Class Torque and Towing

Ford Motor Company has offered up a few news bits of information on the next generation Super Duty pickups coming for 2017, including some numbers which makes the big Ford truck the most capable and the strongest in the heavy duty segment – with the F450 beating the Ram 3500 in towing, hauling and torque output.
Advertisement

The 2017 Ford F250, F350 and F450 will introduce the next generation of the Super Duty lineup and the key feature of those new heavy trucks is the lightweight aluminum body. This aluminum shell was first introduced on the new F150 pickup without any issues, so it makes sense that the lightweight body will move onto the larger trucks as well. As was the case with the F150, the lighter F250, F350 and F450 will all benefit from the lower curb weight with improved towing and hauling capacities, while stronger engines will make these new Ford pickups the strongest in the class.

Truck Classification
Before getting into the ways in which the 2017 Ford Super Duty leads the different segments, a quick look at this comparison.

You will notice that in this piece, we are comparing the Ford F450 to the Ram 3500 and the GM 3500HD trucks. This is because for the consumer market, Class 3 is generally the top of the ladder, with a GVWR below 14,000 pounds. This class has traditionally included the Ford F350, the Ram 3500 and the GM 3500HD trucks, but a few years back, Ford moved their F450 into Class 3 – allowing them to lead over the 3500 trucks from Ram, Chevrolet and GMC.

Ram only offers their 4500 trucks in “chassis cab” form, whereas the F450 is offered with a bed in typical consumer-grade form. As virtue of the bed and the Class 3 listing – the F450 is able to go head to head with the Ram 3500 and GM 3500HD trucks.

The 2017 Ford F450 Super Duty Leads in Towing
Ford Motor Company hasn’t rolled out all of the information on the 2017 Super Duty lineup, but they have offered enough information to know that the trucks wearing the Blue Oval will once again lead the heavy duty truck segment.

To be specific, Ford has offered up the initial towing and hauling ratings for the 2017 F450, along with the horsepower and torque figures for the newest 6.7L PowerStroke and the torque numbers for the 6.2L gasoline engine – all of which are best in class.

Also, while we only know the conventional towing numbers for the 2017 F250 and F350, the 18,000 capacity will make them best in their respective segments with a traditional hitch setup.

2017 Super Duty Engines Lead in Torque
Finally, the other key information on the 2017 Ford Super Duty lineup pertains to the engine options. Buyers will be able to pick between a 6.2L gasoline V8 and a 6.7L PowerStroke diesel. The gasoline engine will offer best-of-gasoline torque at 430lb-ft and the 6.7L PowerStroke will be the best of the segment in both horsepower and torque – with 440hp and 925lb-ft of torque.

925lb-ft of torque in stock form. That is an amazing amount of twist for a factory truck, and another reason why these 2017 Ford heavy duty trucks will be able to tow and haul so much.

The closest competitor to the 2017 Ford Super Duty PowerStroke diesel is the 6.7L Cummins Turbo Diesel from the Ram 3500, which packs 385 horsepower and 900lb-ft of torque. The next best in terms of gasoline torque is also the Ram 3500 at 429lb-ft, but since Ford hasn’t claimed best in class gas horsepower, I would guess that the 6.2L Ford V8 will have less than the Hemi V8’s 410 horsepower.

For those wondering, the Chevrolet Silverado and GMC Sierra 3500HD comes with either a 6.0L gas engine with 360hp and 380lb-ft of torque or a 6.6L Duramax diesel with 397 horsepower and 765lb-ft of torque.

With the arrival of the 2017 model year getting very close, it shouldn’t be long before we get the full spread of information on the new Ford Super Duty trucks.