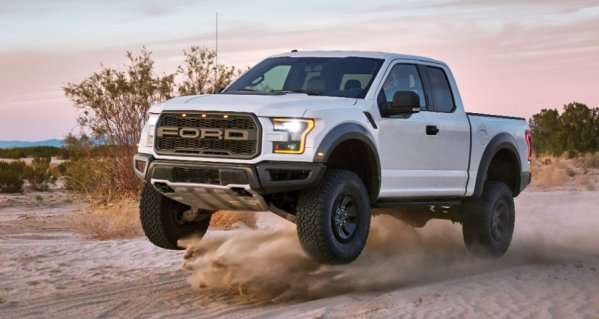 The 2017 Ford Raptor F150 is equipped with an all-new suspension setup with shocks from the off-road experts at Fox, which the Motor Company claims are the most capable factory-equipped shock absorbers ever offered on a road-going pickup truck.
Advertisement

While the Ford Raptor F150 will surely be a beast on the road, this truck has been designed, engineered and built to be an off-road monster with daily driving capabilities. In addition to extensive chassis development, Ford Motor Company worked with Fox to come up with a set of shocks that would offer better performance than any stock damper setup ever offered on a factory pickup – and today we take a look at what makes those shocks unique from the previous high performance F150 suspension.

2017 Raptor Shocks
The 2017 Ford Raptor F150 features the newest and best dampers from the folks at Fox. The 2017 Raptor F150 has the new 3.0 inch internal bypass shocks in the front and rear, and in addition to being larger than the shocks in the previous Raptor, these new dampers have 9 distinct pressure zones throughout the travel of the piston. This 9-zone setup allows the Raptor to offer a smooth ride on road without compromising any off-road performance.

In fact, the new Raptor F150 will almost certainly prove to be better when off road, with 13 inches of suspension travel in the front and 13.9 inches out back - 2 inches better than the previous Raptor. This allows the new F150 Raptor to have more ground clearance, improved approach and departure angles, variable damping based on the amount of wheel movement for the best possible grip and a better ride both on and off the road.

Realistically, it isn’t saying much to proclaim that the 2017 Ford Raptor F150 has the most capable shocks on a factory pickup, simply because there has really never been a truck like the 2017 Raptor – other than the previous generation Raptor. With no real competition for the Raptor coming from Ram, GM, Toyota or Nissan, the Raptor team is really only competing with the last version of the high performance pickup – but Ford isn’t taking that in-house competition lightly.

The 2017 Ford Raptor F150 will almost certainly blown away any stock truck on the market in terms of power and capabilities, and the new Fox high performance shocks will play a big part in the excellence of the new Raptor.