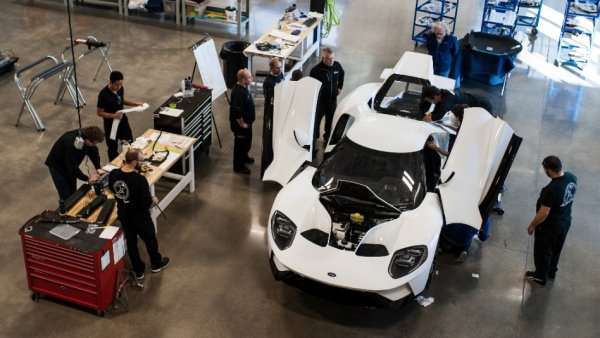 Ford Motor Company announced this morning that the first 2017 Ford GT supercar has been rolled off of the unique assembly line in Canada, marking the official launch of production and making it likely that the first private owner of the new Ford will have their supercar before the end of 2016 – as the company had initially planned.
Advertisement

When the new Ford GT was first introduced as a 2017 model year vehicle, it was widely expected that these new American supercars would reach buyers before the end of the 2016 calendar year, simply because new models generally arrived a few months before the calendar year that matches the model year.

As we got later into 2016, speculation began to swirl around the internet about whether or not we would see any new Ford GT supercars delivered before the beginning of 2017, but with the Motor Company’s announcement today that the first new GT has been completed – it looks as though the automaker will deliver some of these cars during 2016.

“When we kicked off 2016, we had two primary objectives for our Ford GT supercar – to excel at Le Mans, and to start deliveries before year-end. We’ve achieved both,” says Nair. “For everyone involved in designing and developing this car, including all of our employees and suppliers, this is a moment to celebrate,” he adds. “The all-new Ford GT is a showcase of our strength in innovation and our commitment to delivering more for our customers – especially related to light-weight materials, aerodynamics and EcoBoost engine technologies.”

Ford hasn’t offered a set time frame for the start of deliveries for the 2017 Ford GT – at least not publically. Considering how much buyers are paying for the new Ford supercar, with a price in the area of $400,000, I wouldn’t be surprised if they have at least a rough idea as to when their car will arrive, but the company hasn’t made any official statement as to when they will begin shipping cars to the US or around the world.

Figure that there will likely be some quality control process that prevents cars from flying out of the plant, but with only 15 days remaining in 2016 – I would guess at least a few cars should be shipped in the next two weeks.

Still No Concrete Power Numbers
The most unusual aspect of the 2017 Ford GT launch is that with production underway and deliveries starting within the next few weeks, we still don’t have any real performance numbers for the new supercar. We know that it will be powered by a 3.5L EcoBoost twin turbocharged V6 that is very similar to the EcoBoost endurance racing engine, but we still don’t know how much power the new Ford GT will offer.

Since day 1, Ford has claimed that the 2017 GT would have at least 600 horsepower, but even as deliveries are set to begin, the Ford GT website still only says “600+”. It is unclear why the Motor Company is waiting to long to introduce power numbers, but I would guess that when we do get the real figures – we don’t be disappointed.

In the meantime, check out the video below from Ford, showing the new GT supercar being built by hand in Canada.