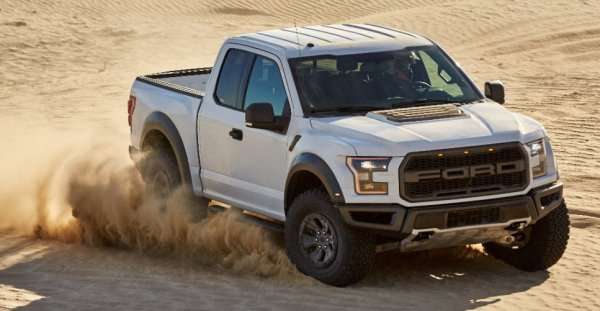 The 2017 Ford F150 Raptor: Designed to Shine in Every Condition

While we still don’t know how much power the 2017 Ford F150 Raptor will offer, the Motor Company rolled out more information on their newest high performance pickup – this time explaining the various Drive Modes which help the 2017 Raptor shine in every driving situation.
Advertisement

The 2017 Ford F150 Raptor will likely be the most capable production truck ever thanks to the powerful twin turbocharged engine, the advanced four wheel drive system and the high performance Fox Racing dampers, but Ford didn’t want to rely only on the mechanical bits to make the new Raptor the ultimate go-anywhere machine. To build on the basic, Ford has added a spread of Drive Modes which will allow the newest F150 to conquer pretty much any terrain on or off of paved roads.

2017 F150 Drive Modes
When the current generation Ford F150 was introduced, the engineers borrowed the Sport Mode technology from the new Ford Mustang to make their aluminum-bodied pickups more fun to drive. The 2017 Raptor takes that approach a step further, with 6 different Drive Modes which adjust the throttle input, transmission shifts, steering feel and the traction control system to make the high performance F150 more fun – or more capable – on any driving surface and in any driving situation.

While Sport Mode in the current F150 pickups is activated through the Tow/Haul button, the new Raptor has a button on the steering wheel which works in conjunction with the driver information center. Pushing the Drive Mode button brings up the selection screen on the gauge cluster, allowing the driver to switch drive modes on the fly without removing his or her hands from the steering wheel.

The Drive Modes for the 2017 Ford F150 Raptor include Normal, Sport, Weather, Mud/Sand, Rock Crawl and Baja, with each setting offering its own unique attributes. Below is a quick rundown of each Drive Mode.

Normal – This mode combines performance with comfort, serving as an “average” of sorts between the most extreme and the most cautious modes.

Sport – This mode is designed for on-road performance, with sharper throttle response, quicker transmission shifts and increased steering feel – along with the transmission also “stretching” the gears into higher RPM ranges for improved power and performance.

Weather – This mode is designed to make the 2017 F150 Raptor safer when traveling through rough winter weather by automatically engaging four wheel drive, applying a unique setting for the AdvanceTrac traction control system, lowering throttle response for less tire-spinning action and softening the shift points of the transmission.

Mud/Sand – As you might have guessed, this mode is designed to help the new Raptor get the best footing when the driver is playing in mud and sand – or any other loose off-road surface. This mode engages four wheel drive “high” and the electronic locking differential, it applies a unique setting for AdvanceTrac and steering is set to “comfort” for the best control in tight conditions.

Rock Crawl – This mode is another which is fairly self-explanatory, as it is designed to make the 2017 F150 Raptor more capable when the driver is conquering loose, rocky footing. Rock Crawl first instructs the driver to stop the vehicle and put it into four wheel drive “low” and once that 4WD mode has been selected, the electronic locking differential engages, the throttle mapping is adjusted and AdvanceTrac is set to the least intrusive setting, thus allowing the tires to spin a bit as they ease over the rocks. Finally, the front view camera will show the driver what is directly in front of the truck, in the area that is otherwise impossible to see over the hood.

Baja – This is likely the most engaging Drive Mode for the 2017 Raptor F150, as this is the mode designed for all-out performance in wide open, off-road conditions. The Baja name is most commonly associated with the Baja 1000 off-road race, so as you might imagine, the Raptor’s Baja setting is intended to make the new F150 go very fast in loose footing. Baja mode engages four wheel drive “high”, AdvanceTrac is set to the least intrusive setting, the throttle response and transmission shift points are sharpened and the transmission shifts are stretched out similar to the Sport mode – helping to keep the twin turbo V6 in heart of the power band for desert racing.

The video below offers a quick look at the 2017 Ford F150 Raptor Drive Modes, as well as some great footage of the beast charging through all sorts of driving situations.