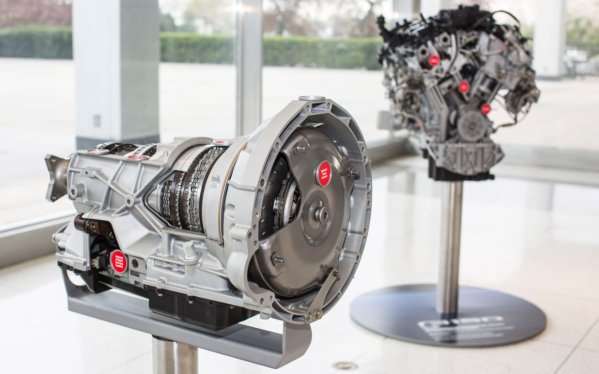 Ford has announced that the 2017 F150 is getting a new 3.5L EcoBoost V6 and the new 10-speed automatic transmission which was first introduced for the new Raptor high performance pickup – but the new 10-speed is only available with the new EcoBoost V6.
Advertisement

The top of the line engine for the 2016 Ford F150 is the 3.5L EcoBoost V6, with 365 horsepower and 420lb-ft of torque. This is the F150’s most powerful engine in terms of torque output and towing capacity, but for the new model year, the Motor Company is rolling out a new premium EcoBoost V6 and the 10-speed automatic transmission that will also be found in the 2017 Raptor F150.

“The Ford truck team lives to serve our hardworking truck customers,” said Raj Nair, Ford executive vice president, Product Development, and chief technical officer. “The powertrain is the heart of every F-150, and together our all-new 3.5-liter EcoBoost and 10-speed transmission will give our customers better power, efficiency and confidence.”

The 2017 F150 3.5L EcoBoost V6
The 3.5L EcoBoost V6 has been the premium engine option in the Ford F150 since being introduced for the 2011 model year and with a combination of 365 horsepower and 420lb-ft of torque, the original EcoBoost has been the workhorse of the F150 lineup since hitting the market. Even though the current 3.5L EcoBoost V6 makes the F150 one of the most fuel efficient and one of the most capable half ton trucks in the segment, the Motor Company has rolled out a new version with a bit more torque.

The 2017 F150 3.5L EcoBoost V6 still offers 365 horsepower, but the torque levels have been increased to 450lb-ft. This increase was achieved by adding new cylinder heads, a new direct and port injection fuel system and a new set of turbos that produce 16 pounds of boost rather than 14.5 like the current EcoBoost V6. This new engine is more powerful and it is about 4 pounds lighter than the current version, but there is no mention of fuel economy improvements.

That being said, I expect to see improved fuel economy figures from the 2017 Ford F150 with the new EcoBoost V6 engine because this new mill only comes with the new 10-speed automatic transmission.

The New 10-Speed Automatic
Every 2017 Ford F150 equipped with the new 3.5L EcoBoost V6 will come with the 10-speed automatic transmission that was introduced last year at the Detroit Auto Show in the upcoming Raptor high performance pickup. This 10-speed gearbox was developed in cooperation with General Motors and this gearbox is in the same family as the transmission in the 2017 Chevrolet Camaro ZL1.

The implementation of the new 10-speed automatic transmission in the 2017 F150 will give the truck improved low end acceleration while the higher gears will allow the EcoBoost engine to run at lower engine speeds when cruising – thus making the combination more fuel efficient. It is unclear how much more efficient the 2017 F150 will be with the new engine and transmission, but the new trucks with this new drivetrain should be more capable, quicker and more fuel efficient.

The 2017 Ford F150 pickups with the 2.7L EcoBoost V6 and the 5.0L V8 will continue to use the 6-speed automatic transmission for now, but I would expect to see the 10-speed rolled out through the entire F150 lineup within the next few years, provided that the company doesn’t run into any issues with this new gearbox.

Steve wrote on May 5, 2016 - 1:38pm Permalink
It's clear that Ford is about to drop the 5.0L from the line up, which is too bad it's one heck of an engine. For some a 4x4 truck is a luxury item and luxury means "everything just the way I want it" and having the sound of a burbling V8 as I head down the road is a luxury I ought to be able to buy if I want it. MPG is important but it's not most important. Perhaps Ford could work on a small bore turbo 8?
Steve wrote on May 6, 2016 - 9:24am Permalink
Okay, apparently I skimmed that article too quickly, all the engines will get the new transmission eventually. I wonder which engine will be a harder test of the 10 speed the V8 with 385 HP and 380 ft-lb torque or the turbo 6 with 365 hp and 450 ft-lb of torque? I'd say the high torque engine however looking at how a GT350 with only 429 ft-lb of torque can out run a z28 with 500 ft-lb torque apparently due to higher HP, that additional HP of the 5.0L has to have some kind of impact that the turbo engine doesn't.
Alec AVERY wrote on October 12, 2016 - 1:57pm Permalink
Dont worry steve, I work for Ford and Ford is not getting rid of the 5.0 anytime soon. They also have no reason too, 36% of new F-150s sold have the 5.0 and people love that engine.
Bob wrote on May 16, 2016 - 10:27pm Permalink
I would like a new supercrew with the 5.0 and a manual,(with a real foot operated clutch) transmission. Even a three on the tree would suit me. Trucks need manuals for slow speed maneuvering. If I were drag racing, then auto would be great. The manufacturers are worried that people can't drive a true manual and text,talk, and put their makeup on while driving.
Herman wrote on May 24, 2016 - 11:17pm Permalink
There is no market for automatics, it would likely cost Ford or any other manufacturer to keep a very low selling option.
GKerry wrote on May 20, 2016 - 3:06am Permalink
I am genuinely surprised that everyone is just accepting these multi turbo small engines based on their power and how they feel, without any concern about the tremendous stress involved with making a V6 engine"think" that it is a big V8. I said I never would own a turbo after hearing all the horror stories from friends, but I hot snookered on a "great deal" by a relative. one turbo vehicle is more than enough for me. I've learned my lesson. A 2L 4 cyl single spool was put into a vehicle that should have had a med. to large V6. It needed the turbo to provide acceleration to get out of its own way, otherwise it would have been a complete dog. I bought it used, and I don't drive like a maniac, but do pass cars on the highway and demand acceleration. At only 130k miles the Lil engine blew an oil seal. I attribute it to the extreme temps and pressure within the engine caused by the turbo. This is not even considering the fact that a turbo can easily cost $2k to repair or replace. I would only consider buying a turbo charged pickup if I planned to sell it at around 60k mi. I honestly doubt you will see many of these trucks run the typical 180,000 to 200,000 miles you can expect from that 5L V8. The days of being the longest running trucks on the road are over for Ford, unless their competitors also abandon longevity in favor of gas mileage. I think its clear we won't see gas above $3.25 a gallon again in our lifetime with availability of fracking. So 19mpg vs 24mpg is a moot point in my wallet. I'd actually buy a 3.5 normally aspirated V6 before I would consider a turbo anything. Because i tend to put over 100k mis on my vehicles. Just not willing to risk the life of the engine for a kick on takeoff and a couple more mpgs.
larry parham wrote on June 20, 2016 - 2:33pm Permalink
JUST ABOUT READY TO SCREAM !!! For 3 years I have been waiting to buy a new f150 4x4 platinum with the 10 speed automatic. I have been driving FORD trucks since 1977. BUT... I do not and am not going to buy a echo boost. I want a 5 liter coyote. An now I find out the 5 liter is not getting the new transmission ????? FOR THE FIRST TIME 40 YEARS IM THINKING ABOUT CHANGING BRANDS ...