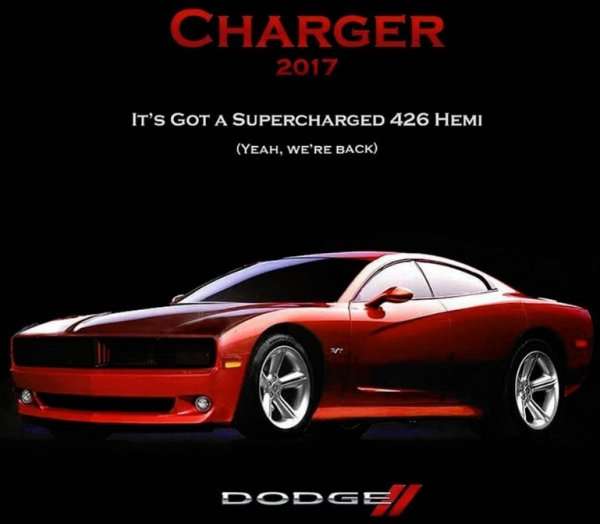 The image shown above of what is stated to be the 2017 Dodge Charger is not an image from the Chrysler Group and I can say without question that the car shown above will not be coming to your local Dodge dealership in 2017 – or ever.
Advertisement

I imagine that a great many people who are reading this right now are thinking “this picture is obviously not the 2017 Dodge Charger”, but since there are so many people sharing this image on Facebook and clamoring for the chance to buy this car in two years, I felt the need to address this obnoxious rumor.

I am sorry to have to disappoint so many people online, but I want to make it as clear as possible. The car above is not the 2017 Dodge Charger. Although this image might look like an official piece of marketing material from Dodge, it is not. It is nothing more than the work of a Photoshop artist with a vivid imagination.

The Fake 2017 Charger Broken Down
While this has fooled some people into believing that the car above is the next generation Dodge Charger, the fluid, curvy body lines are actually those of a 1999 Dodge Charger Concept, shown below. The 99 Charger Concept has a vastly different front end from the car included in this new rumor, but it is clear that every other aspect of the artwork above comes from the 1999 concept.

Even the wheels and the background are the same, and while it blows my mind that there are Dodge lovers who don't recognize the lines of the 1999 Charger Concept, that is what we are actually seeing above. Instead of the curvy front end of the 1999 Charger concept, this fake 2017 Charger artwork has a grille opening that is borrowed from the 1969 Charger, while the lower front fascia is just a generic layout that fits the front end. Really, the front end doesn’t fit the body all that well, as you can see that the far (passenger) side of the front end meets the fender line at a point where it is almost level, while the near (driver) side fender curves down much further to meet the grille opening.

No Blown 426 Hemi, Either
However, this rendering is clean enough and well-presented enough that it fooled a great many people into believing that the dark red car shown at the top of this piece was the 2017 Dodge Charger. When you add to the fairly well-done artwork the promise of a supercharged 426 Hemi, the graphic becomes even more enticing, but I would say that there is basically no chance of Dodge offering up a production version of a modern supercharged 426 Hemi. The blown 426 is a lovely idea, but with the concerns of even high performance cars being as fuel friendly as possible – we aren’t likely to see a supercharged 7 liter Hemi in the near future.

In all reality, the odds are very good that the 2017 Dodge Charger is going to look a great deal like the 2015 Dodge Charger. Unfortunately for those folks hoping for a car like the one above with a 69-esque front end, an elaborate customization will likely be your only choice. The Charger front end will surely change over the years, but I wouldn’t expect a return to the design of the 1968-1970 design any time soon.

Frank Shearer wrote on February 18, 2015 - 3:01pm Permalink
Too bad the Charger didn't take its cues from the 1999 concept, would have been a great looking car, although I like the 1970-like front on the fake. Still wouldn't buy one though, real Chargers only have 2 doors. Guess I will stick to my 2015 Challenger R/T
BILL JAMESON wrote on February 18, 2015 - 7:33pm Permalink
IF YOU PUT THE 2017 THATS ON YOUR WEB PAGE I WILL BUY ONE AS I HAVE A 2014 RAM AND A 2013 CHARGER NOW AND THERE PAID FOR AS I HAD A 1969 CHARGER AND I LOVE THE LOOK
brent nix wrote on February 18, 2015 - 11:32pm Permalink
I thank that design would be perfect for the company and even better with a six pack v8 hemi in it 4 doors no 2 doors yess i have a 2008 challenger srt8 limited it looks amazing i like that its the only car that has really kept to its older body design and thats what i thank yall need more of i cant see how it would be bad for the company
Doesn't matter wrote on February 19, 2015 - 9:54pm Permalink
If Dodge built this car with the supercharged 426 production couldn't keep up with demand. And you know I'm right.
dan wrote on February 21, 2015 - 7:42pm Permalink
they should take a lesson from the ford mustang . bringing back the styles of the older muscle cars is what people want. would like to see a charger reminecent of the 68 style down to the tail lights.
Steve wrote on May 12, 2015 - 2:11pm Permalink
It's amazing how good that Concept Charger R/T still looks today.
Roadhog wrote on July 30, 2015 - 5:23am Permalink
STILL no 2-door? Why is antiquated Dodge (does it really exist?) only making a Dad's Car? WTF?! Also, how many water pumps will an owner go thru before he finally gets pissed enough to say Adios?
David wrote on August 23, 2015 - 12:37pm Permalink
Charger needs a 2-door , I'm 65 ,6'4" and hate 4- doors the B-post between doors makes it very hard it enter and exit [ although the 300 S is the Best looking 4-door around ] I'm thinking about a Challenger , BUT would much rather get a 2-door Charger with a larger door for us larger people .
kathy starnes wrote on February 29, 2016 - 6:58pm Permalink
It should be.
shawn wrote on March 2, 2016 - 9:33pm Permalink
This is not the exact picture but I got a sneak peak at the '17 and it does not look to far off. It is still a 4 door but you really cannot tell that it is. I have worked in the auto industry for nearly 20 years and this is the first car I have been excited about in years.
Gary Montgomery wrote on May 15, 2016 - 9:52pm Permalink
I would buy 2 door Charger for sure.
Steve wrote on August 3, 2016 - 4:06pm Permalink
if the Dodge brothers were still alive today ,they wouldn't wait to make it a 2 door model it would have been done by now ........ Fiat should take notice of these post's and make history..... are you listening FIAT!!!!!!!!