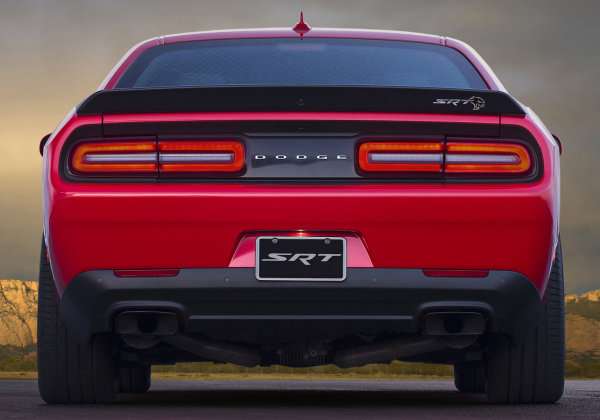 The 2017 Dodge Challenger and 2017 Dodge Charger in SRT Hellcat trim will get the longest list of new features among all of the muscle car configurations, and for those prospective buyers holding off for the 2017 model year, you can expect to see your car sometime during the 4th quarter – with production of the 2017 model year Challenger and Charger slated to begin next month.
Advertisement

A few weeks back, we brought you the news that the 2017 model year examples of the Dodge Challenger SRT Hellcat and Dodge Charger SRT Hellcat would get more changes than the other trimlines of the popular Mopar muscle cars. The changes are all fairly simple and when parked next to a 2015 or 2016 model, some people might not be able to pick out the differences.

However, with the simple changes slated for the 2017 Hellcat Challenger and Charger has come a new wave of interested new car shoppers. Across the various social media groups dedicated to these modern high performance monsters, many people have shown interest in the availability of the 2017 model year vehicles so I reached out to the folks at FCA to see when the lightly improved Dodge muscle cars will be reaching dealerships.

2017 Challenger, Charger Production Begins in October
Per the folks at FCA, production of the 2017 Dodge Challenger and Dodge Charger will begin in the company’s Canadian production facility in October. They didn’t say exactly when in October, but we know now that 2017 Hellcat production could begin in about two weeks, with production almost certainly starting within the next six weeks.

As for when those 2017 Hellcat Challengers and Chargers will begin reaching dealerships, the official word from FCA continues to be that they will arrive during the 4th quarter of 2016. Figure that if production begins during the first week of October, two weeks delay between production and the day when cars reach dealerships would mean that the 2017 models are about a month away from meeting their new owners – although that time could certainly stretch into November, depending on when production begins, shipping schedules, etc.

2017 Challenger, Charger Changes
In case you missed our first report on the changes for the 2017 Dodge Challenger and Dodge Charger, here is a quick rundown:

-All 2017 Challenger and Charger models will come with the newest UConnect infotainment system, with higher levels of smartphone connectivity, faster load times and improves graphics

-2017 Challenger and Charger in SRT 392 or SRT Hellcat form get a backlit steering wheel center, with the SRT glowing white in 392 models and red in Hellcat models

-2017 Hellcat Challenger and Charger models get more Hellcat badging, with the SRT logo being accompanied by the Hellcat head on the dash, seat backs and rear spoiler

-2017 Hellcat Challenger and Charger get new, lighter wheels with a 5-spoke design

Click here for a detailed look at the 2017 Dodge Challenger and Charger changes and for a closer look at all of the 2017 colors, click here.

Tommy wrote on September 19, 2016 - 2:07pm Permalink
The UConnect, lights, and badges seem to intrigue the unsuspecting. Naturally, a light in the center of the steering wheel 'will not be a distraction'. The dash panel needs to be redesigned, along with the rear spoiler 'keyed' lock leaving an unfinished look to the tail. An option should be provided as to the two separate tail light bezels or if one can choose a full section tail light. The Sirius antenna looks like a 'shark tail' which reflects too much contrast for a muscle car. We're certain a low profile antenna should provide a clear signal, and to include a hidden load to amplify the signal would be more inline, rather than displaying a 'shark tail'. Polymers continue to adorn the Challenger, Charger and the rest of new vehicles while the price increases. It would be nice for a limited edition to display a special variation of components, including interior design whereby the vehicle would be designated as a stand alone edition. However, the consensus remains unchanged as to accruing the most revenue, while instituting the cheapest way to build a vehicle, as outsourcing to the lowest bidder.
greg wrote on September 20, 2016 - 9:34am Permalink
That ;s not a key lock on rear spoiler ,it's the back up camera
Gerard wrote on September 19, 2016 - 2:27pm Permalink
I disagree with the poster who wants the xm antenna to be flatter. I think those flatter antennas look like warts. At least when it's shaped like a shark's fin, it looks kinda cool. The fin design sure beats the "ugly little lump"
Tommy wrote on September 19, 2016 - 2:38pm Permalink
@ Gerard It is not how well an antenna 'looks', rather the signal to transmit the frequency, enhanced by any load to magnify the signal. Naturally, some may view the antenna as intrigue, but that is not the purpose. FCA must cherish people such as yourself. We do not waiver in our commentary, only stating fact on the aforesaid.
Jay wrote on November 7, 2016 - 6:32pm Permalink
Very true that the antenna working to it's maximum capability is very important. "LOOKS" are just as important. "LOOKS" are what set a great car like the Challenger apart from the hundreds of nice, smart funnctioning, but terribly generic cars on the market in every country. The Challenger is a classic, it has been since 2008, built with the design of the 1970/71 Challenger, it stands alone. Where as the Mustang and Camaro have begun to lean toward the Euro design a little, the Challenger has stayed true to what it is about, and THIS is why people are still buying a car which is approaching 10 years old in it's design. Because it is a "CLASSIC". It is raw, it is uncompromising. So if the antenna works a little less effective than it could, but the car looks wilder, then it's a small price to pay. Plus in 3 years, 10 years, 20 years time, nobody will care how the antenna works :-)
Armando wrote on September 19, 2016 - 7:43pm Permalink
I love the new stuff, one thing that would REALLY BE COOL would be to infused the Hellcat head in the air intake hoe like the new T/A Challenger has!!
andrew giancontieri wrote on October 24, 2016 - 1:47pm Permalink
I like that the seats will have badging!Just sold my 2006 Dodge Daytona Go Mango so if I do buy the hellcat Charger Go Mango will be the color! Andrew C Giancontieri Long Island NY
andrew giancontieri wrote on October 24, 2016 - 1:50pm Permalink
Go Mango Charger my 1st choice 4 door fine by me LOL!Like that they are badging the seats on 2017 model!Just sold my 2006 Datona Charger Go Man Go
felix gonzalez wrote on November 28, 2016 - 9:38pm Permalink
Just purchased a 2016 model... traded in my 2005 viper and 2012 R/T Challenger. I have no regrets, the reactions and instant respect this Cat gets is unbelievable. The Viper was definitely an attention monger but this Cat it's on another category on its won. All the cosmetic changes to me are unnecessary to an already perfect muscle car.
Martin Bates wrote on December 18, 2016 - 11:37am Permalink
My new 2017 Charger Hellcat does not have badging, or logo, on the rear spoiler.
Slandrew wrote on May 19, 2017 - 10:01pm Permalink
Is Norman Bates your brother there is badging on 2017 Hell cats where on spoiler would you like them to put it??