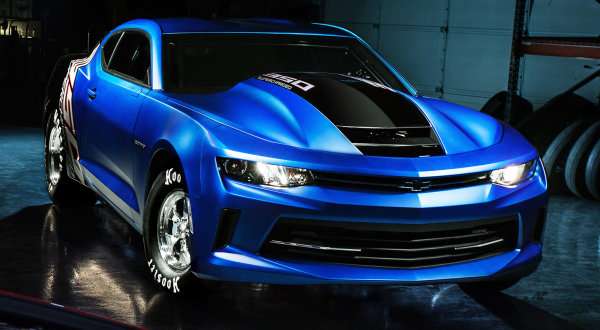 The 2017 COPO Camaro Debuts at SEMA

Among the many high performance concept cars at the 2016 SEMA Show, the 2017 Chevrolet COPO Camaro is one very fast car debuting this week at the Las Vegas Convention Center – with 69 examples being built for the new model year and a trio of engine options.
Advertisement

So, before getting into the details of the 2017 COPO Camaro, I should point out that there is really nothing new about the drag racing package for the new model year, but the mere fact that the factory drag racing program is continuing is reason for gearheads to celebrate. Even if you are a Dodge or Ford fan, you should applaud cars like the COPO Camaro, as this super stock Camaro is part of the driving force behind the Mopar Drag Pak Challenger and the Ford Mustang Cobra Jet.

Oddly, we haven’t heard much about the new Challenger or Mustang factory drag racing package, but 2017 COPO Camaro #1 of the 69 was introduced today at SEMA in a gorgeous new anodized (satin) hyper blue metallic.

The 2017 COPO Camaro
As was the case in every other model year of the modern COPO Camaro, the 2017 edition will be limited to just 69 units in order to commemorate the famed 1969 COPO Camaro. The difference between this modern Camaro and the classic COPO Camaro is that these high performance muscle cars are built strictly for track use, coming with a serial number rather than the VIN which is required to register a vehicle for road use in the USA.

As you can see in the image above, the first 2017 COPO Camaro is finished in the unique anodized Hyper Blue Metallic with a black tail and the “350 Supercharged” logo sprawled along the seam in the two colors. Also, the raised center section of the satin blue hood is painted black to match with the 350 Supercharged logo present there as well.

Those are curious ratings, considering that the COPO Camaro with any of those engines will run far quicker than any production car with a similar power rating, but those are rated per NHRA rules – not the SAE rating system by which production cars are measured. Realistically, the supercharged 350 models will run well down into the 8-second quarter mile range, with power ratings closer to the 1,000hp mark.

The COPO Camaro is designed for those folks who want to buy a turnkey, NHRA approved race car to go super stock racing, but the ability to buy into an instant 8-second car doesn’t come cheap. The MSRP of the COPO Camaro starts around $100,000 and they are sold via a lottery process, so getting one takes a nice chunk of change and a good bit of luck.