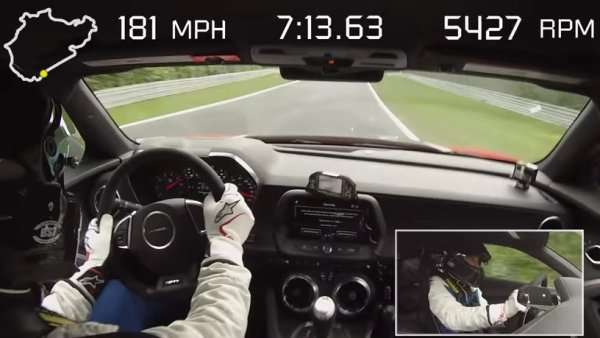 General Motors has finally announced the Nürburgring lap time for the 2017 Chevrolet Camaro ZL1 and, as expected, it is the quickest American muscle car to hit the famed German road course – running a 7:29.60 – comfortably beating the previous best time by the Camaro and ranking 6th all-time among American production vehicles.
Advertisement

Back in May, a handful of videos surfaced showing the 6th generation Chevrolet Camaro storming around the Nürburgring in a few different forms. Most notably, General Motors had a pair of 2017 Camaro ZL1 test cars – one in red and one in blue – along with a camouflaged model which many believe to be the 6th generation Camaro Z/28.

That mysterious Camaro (which may or may not be the next Z/28) ended up stealing much of the attention when the test driver crashed hard on camera for the world to see, but the mystery car wasn’t the focus of GM’s trip to Germany. They were there to test the production version of the new Camaro ZL1 and today, they announced the outcome of that testing – with the 2017 ZL1 beating the old ZL1 by a whopping 12 seconds.

“To be almost 12 seconds quicker than the 5th-Generation ZL1 is a testament to the advanced design and technology of the new ZL1,” said Al Oppenheiser, Camaro chief engineer. “From the improved aerodynamics, mass reduction and 650-horsepower LT4 to the Magnetic Ride Control, electronic limited-slip differential and Custom Launch Control, the ZL1 was designed to take on the world’s most challenging track, making it right at home on any track, road or drag strip anywhere.”

2017 Camaro ZL1 ‘Ring Time
According to General Motors, the 2017 Chevrolet Camaro ZL1 with the new 10-speed automatic transmission laid down a lap time on the Nürburgring Nordschleife of just 7:29.60. No American “muscle car” has ever made it around the ‘Ring quicker than that, with the 6th gen Camaro ZL1 beating the 5th gen Camaro Z/28 (the previous muscle car record holder with a time of 7:37.4) by almost 8 seconds. Keep in mind, the 2014 Camaro Z/28 was a track-purposed, road-legal vehicle, devoid of luxuries like air conditioning and a sound system whereas the 2017 Camaro ZL1 is a fully loaded street car.

Taking that comparison further, the 5th generation Camaro ZL1 ran a best time of 7:41.27, so the new ZL1 is roughly 12 seconds quicker around the 12+ mile road course than its predecessor.

In short, the Camaro now holds the top three spots for the quickest Nürburgring Nordschleife lap time by an American muscle car, with no real competition from its closest rivals. Neither Ford nor Dodge have made a real ‘Ring record attempt with their muscle cars, allowing the Camaro to dominate the class at the world’s most famous road course.

ZL1 Versus the Supercars
While the 2017 Chevrolet Camaro ZL1 is the quickest muscle car to ever lap the Nürburgring, it is also one of the quickest American production cars to tackle the famous track. The only American cars to beat the 2017 ZL1 are the Dodge Viper ACR (two of them), the C6 Corvette ZR1 (two of them) and the C6 Corvette Z06. The “slowest” of those American supercars was the 2009 Corvette ZR1, which ran a 7:26.4, so the new Camaro ZL1 is only around 3 seconds behind the supercharged supercar.

In other words, the 2017 Chevrolet Camaro ZL1 went to the toughest road course in the world and laid down the best lap time ever by an American car with four seats while also hanging with some of the best performance cars of the modern era.

Best of all, you can ride along for the record run in the official GM video below, so crank up your speakers and enjoy!