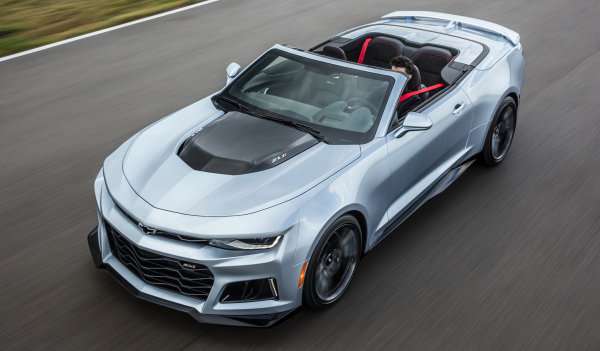 The 2017 Chevrolet Camaro ZL1 is making its grand debut this week at the 2017 New York International Auto Show and as viewers of the morning show Kelly and Michael learned early this morning, the 640 horsepower super Camaro will also be offered as a convertible – including all of the performance goodies of the hardtop with the open-air fun.
Advertisement

Last week, General Motors announced their plans to offer the 2017 Chevrolet Camaro ZL1 and with the start of the New York International Auto Show this week, the new supercharged super Camaro is making its debut under the bright lights of the Big Apple. When the company first introduced the 6th gen Camaro ZL1 online last week, they spoke only of a hardtop model, but we have learned this morning that the 640 horsepower muscle car will also be offered as a convertible. Most importantly, it sounds like the ZL1 convertible will have all of the go-fast goodies found on the new ZL1 coupe.

In other words, when the Camaro team was working on the initial design stages for the 6th gen muscle car, they planned out the chassis to offer the vital rigidity needed with or without the roof. In many cases, the convertible version of a performance car has extra reinforcements in the chassis and doors to compensate for the loss of the roof, but the Camaro platform was engineered to be just as strong without the roof. As a result, minimal changes were needed between the coupe and the convertible, so the chassis itself remains unchanged from one ZL1 to the next.

Like the coupe, the 2017 Chevrolet Camaro ZL1 convertible is powered by the supercharged LT4 V8 with an estimated 640hp and 640lb-ft of torque, mated to the buyer’s choice of a 6-speed manual transmission or a 10-speed automatic transmission. The ZL1 package also includes the newest version of GM’s Magnetic Ride Control suspension system, massive Brembo brakes and lightweight wheels wrapped in high performance rubber.

In terms of styling, the 2017 Camaro ZL1 convertible wears the same unique front fascia, hood, side sills and rear spoiler as the coupe, with the only real difference between the two 640hp muscle cars being the cloth or metal roof.

The biggest difference between the 2017 Chevrolet Camaro ZL1 coupe and convertible will be the pricing and availability. Prices have not been announced, but based on both past and current Camaro pricing models, we can expect the convertible to be a couple thousand dollars more than the coupe. Also, while the ZL1 coupe goes on sale later this year, the Camaro ZL1 convertible will not begin to reach dealerships until sometime in 2017.

Click here for a closer look at the 2017 Camaro ZL1 coupe!