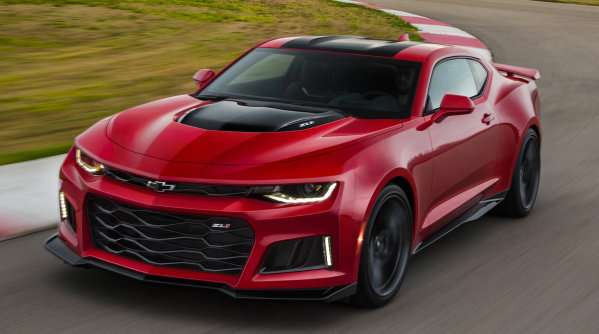 As expected, General Motors pulled the wraps off of the 2017 Chevrolet Camaro ZL1 this morning and while the new ZL1 features the supercharged LT4 engine and the high tech handling system that we predicted, the new 10-speed automatic transmission is one feature that no one predicts – and it could go a long way in making this 640hp muscle an even nastier beast.
Advertisement

Since the 2016 Chevrolet Camaro was introduced, the muscle car community has been waiting for the next generation ZL1, which would introduce the most powerful 6th gen Camaro, packing the Corvette Z06’s supercharged LT4. That day has come, and as expected, the LT4 is under the hood with more power than any factory stock road-going Camaro ever, but the 640 horsepower powerplant is only the beginning of this wicked new package.

2017 Camaro ZL1 Performance
General Motors has only offered up the basic information on the 2017 Chevrolet Camaro ZL1 package, so we don’t have official power numbers, weight numbers or real-world performance figures (0-60, quarter mile, top speed, etc), but we have enough information to know that this should be the best performing street legal Camaro of all time.

The new Camaro ZL1 package starts under the hood, where the LT4 V8 provides an estimated output of 640 horsepower and 640lb-ft of torque. This is “estimated” power, so the official numbers could be higher when the car hits dealers later this year, but I wouldn’t expect the Camaro to have more power than the Corvette Z06 (650hp, 650tq) and with the Cadillac CTS-V offering the same 640/640 – I expect that these estimated figures could prove to be the official figures. Should that be the case, the 2017 Camaro ZL1 will have 60 more horsepower and 84lb-ft more torque than the 5th gen ZL1 which was formerly the most powerful Camaro of all time.

That powerful V8 is mated to the biggest surprise of the 2017 Camaro ZL1, and that is the new 10-speed automatic transmission. There is a standard 6-speed manual, but this new 10-speed automatic transmission will almost certainly deliver the highest levels of performance. This new 10-speed gearbox will feature extremely aggressive gearing for the best acceleration possible while the small steps between each gear will keep the revs high during stints of spirited driving.

“Driving the Camaro ZL1 is best described as ‘fast with finesse,’” said GM President Mark Reuss. “It is beautifully balanced, with perfect damping and isolation for optimal performance and driver confidence in virtually any situation – from the Pacific Coast Highway to Willow Springs to Pomona.”

To get that finesse, the 2017 Camaro ZL1 is equipped with the latest Magnetic Ride suspension setup, Performance Traction Management, an electronic limited-slip differential, Custom Launch Control and the Driver Mode system, along with the biggest brakes ever offered on a factory stock Camaro. Up front, there is a set of 15.35 inch Brembo rotors under 6-piston monoblock calipers with 4-piston stoppers and slightly smaller rotors out back. Also, while GM hasn’t stated the official weight of the ZL1, they have stated that it will weigh roughly 200 pounds less than the outgoing ZL1.

Camaro ZL1 Design
While the mechanical bits are really what make the 2017 Chevrolet Camaro ZL1 so impressive, these new muscle cars have a host of upgrades inside and out to improve performance and to give them a more menacing look.

Up front, the 2017 Camaro ZL1 sports an aggressive new front fascia with a large splitter along the bottom, a gigantic grille opening in the middle, large cooling ducts on the outer corners and – as expected – the Flowtie badge in the upper grille. There is also a new vented hood with a raised center section made from carbon fiber, wider flared front and rear fenders that make room for the huge tires, unique side skirts and a new rear spoiler – all of which work together to give the new ZL1 the best aerodynamics of any of the 6th gen Camaros.

Finally, the interior of the new Camaro ZL1 features Recaro suede seats, a flat bottom steering wheel, a unique shift knob and the GM Performance Data Recorder system is standard, allowing owners to record their day at the track with a full telemetry readout.

Unfortunately, there is no mention of price for the 2017 Chevrolet Camaro ZL1, but we know that it is slated to hit dealerships late this year and when it does, Hellcat Challenger owners will finally have a stock muscle car to give them a run at the local drag strip…although the ZL1 will likely prove to be an impressive mover on the road course as well.