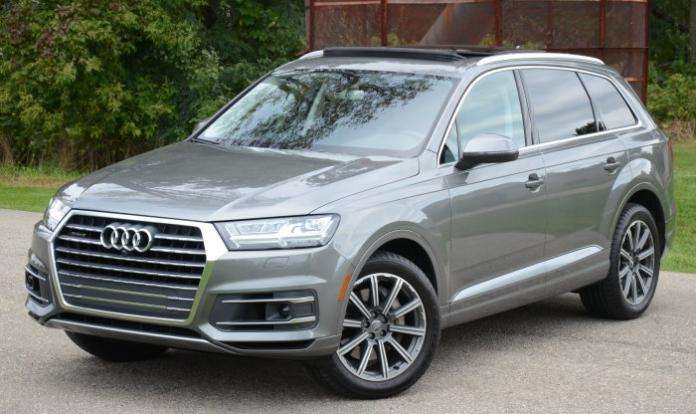 I recently spent a few days driving the 2017 Audi Q7 3.0I Premium Plus, during which time I used the fun-to-drive luxury SUV to negotiate Detroit rush hour traffic in style and based on that experience, I would call the Q7 the Ultimate Commuting Machine.
Advertisement

The large luxury SUV segment is a congested one, but the 2017 Audi Q7 3.0T with the Premium Plus package combines fun-to-drive factor, solid fuel economy, a roomy interior and premium features including the best navigation system on the market like no other – making the Q7 the Ultimate Commuting Machine. The Audi Q7 isn’t the biggest 3-row luxury SUV, nor does it have the most power or the longest list of features, but whether you are the driver or a passenger in any of the three rows, this is a great SUV for the daily grind.

Big Space in a Small Package
From the outside, the 2017 Audi Q7 doesn’t look like a “big SUV”, but it does have three rows of seats, allowing space for 7 people while still reserving some space out back for some cargo. As is the case with many of the smaller three row SUVs, the rear-most seats are tight in the area of leg room, so you will want to seat children or shorter adults in the back row, but aside from being short on leg room, the third row offers enough space around the upper body and head comfortably seat an adult.

Although the third row is best suited for people around or under 5 feet tall, the second row and front seats offer ample seating space in every direction. If you put three adults in the second row, they will most certainly find themselves fighting for elbow room, but the Q7 has one interesting advantage over many vehicles with its second row seats. The middle seat is not just some awkward pad wedged between two normal outer seats, so the person seated in the middle enjoys the same basic seat pad construction as the other two people in that row. As a result, the ride is far more comfortable for the person sitting in the middle of the second row than it is with the vast majority of vehicles – making it a far more reliable seating position. Realistically, I don’t imagine that many Audi Q7 owners are going to carpool with seven adults, but they could, provided that two of those adults are of below average height. On the other hand, say that a married couple with one small kid goes out to dinner with another married couple who has two small kids, the Q7 will comfortably hold everyone. One kid in the second row middle seat and the other two out back leaves the second row outer seats and the front seats for the adults – all of whom could be over 6 feet tall and still fit in any of those seats. Also, say that these two couples and the three kids are going to the beach for a day, the rear cargo area – while reduced by using the third row of seats – will still easily hold the baggage needed for a day-long outing with two small families.

Also, if you have a large family with, say, 4 or 5 kids, the Audi Q7 will comfortably accommodate the parents up front while providing plenty of space in the second and third row for the kids as they grow. Best of all, if you aren’t transporting a bunch of people in the Audi Q7 and you need to haul something large, such as a new barbecue grill in a large box, all of the seats rear of the driver’s seat easily fold down to create a huge cargo area.

Premium Luxury Features
Space aside, the 2018 Audi Q7 cabin is exactly what you would expect from a large luxury SUV. The front seats are heated and cooled with full electronic adjustment and the second row outboard seats are heated while all of the seats are wrapped in plush premium leather. In addition to the heated and cooled seats, the Warm Weather Package adds 4-zone climate control, separating the air flow for the driver, the front passenger, the rear cabin right side and the rear cabin left side. Over the front and second row seats, there is a large sunroof with a shade that blocks out the direct sun while still offering some interior lighting. My Q7 test vehicle was fitted with the 19-speaker Bose sound system, which isnt quite as impressive as the $5,000 Bang & Olufsen system from the Q7 Prestige package, but the sound quality of the Bose system is predictably fantastic at any volume levels, regardless of whether you listen to classic rock, heavy metal, country or R&B. The highs and vocals are crisp and the bass booms, satisfying the demands of many music lovers.

The premium speaker system is powered by Audi’s unique infotainment interface, which has controls scattered all around the driver, but those are arranged in a way that makes adjusting everything on the fly nice and easy. The heart of the infotainment system is the screen that rises out of the dash on startup and the main control interface is the knob and laptop mouse-style touchpad located just in front of the shifter. The majority of decisions are made by rotating the knob and pushing down on the knob to “click” the chosen item, and this system allows the driver or front passenger to easily change the radio station, the drive mode, the climate control and the media files, along with all of the basic vehicle settings. Next, there is a small knob next to the shifter which controls the infotainment volume along with skipping from track to track or from one radio station to the next, but that knob is more useful for the front passenger than the driver. That is because the Audi Q7 has a spread of buttons and scroll wheels on the steering wheel which allow the driver to make all sorts of adjustments without removing his or her hands. At first glance, the Q7 steering wheel doesn’t seem to have much going on in the way of steering wheel controls, but with the Audi Virtual Cockpit feature, pretty much everything that you could want to change while driving – be it the song on the radio or the navigation system – can be done from the few steering wheel controls.

The virtual cockpit takes some time to learn how to quickly move from mode to mode, but in just spending 10 minutes in the driving, just playing with the steering wheel controls and the Virtual Cockpit gauge cluster, I was able to get a good grasp of how the system works. Unlike many infotainment systems with steering wheel controls, the Audi Q7 allows you to scroll through every radio station rather than just the presets, so when you are making the long, slow drive in the morning, you can easily skip around when finding a song that you like. It should be noted that Audi’s infotainment system is one of the few I have tested which allow you to set the navigation system with the hard controls (not voice control), so it makes changing your destination on a fly much easier – especially when you have a passenger who can input the address. The most enticing feature of the Audi Virtual Cockpit is the in-gauge navigation display, which I believe makes this vehicle the ultimate rush hour vehicle. When driving with the navigation screen open between the large gauges, you have access to a Google map of the area, with the roads which are backed up with traffic highlighted in red. When receiving directions, the map is fairly zoomed in, so you can see the next road coming up, but with the scroll wheel, you can quickly zoom out away. While driving in thick Detroit traffic, I would scroll out and locate the roads which were not red and I made the turns needed to stay on those free-flowing roads. When traffic on the current road backs up, I would find the closest clear road and then find the clearest path – all with just the normal information on the navigation screen. The Google map view makes recognizing areas along your drive far easier, but the real time traffic information in the Audi is the most useful system I have experienced. This system took me on some strange roads along my daily drive route, but this traffic system display helped me to cut significant amounts of time from my rush hour commute.

Fun to Drive
The 2017 Audi Q7 3.0T is powered by a supercharged 3.0L V6 which delivers 333 horsepower and 325lb-ft of torque to all four wheels via an 8-speed Tiptronic (automatic) transmission and, of course, an Audi Quattro all-wheel drive system. For a three row SUV, 333 horsepower doesn’t sound like a whole lot of power, but as is the case with so many Audi vehicles, the Q7 3.0T feels much quicker than you would expect. Particularly when you set the drive mode system to the Dynamic setting, the Q7 is quick off of the line and it pulls hard as you blow past any posted speed limit in America, so while this isn’t a vehicle that you are going to buy to go racing – it packs plenty of power to get off of the line in a hurry while being capable of cruising down the highway at high speed without really breaking a sweat. Next, and perhaps most importantly, the 2017 Audi Q7 offers a great balance of handling and ride quality. While the Q7 can be set to offer a sportier ride and sharper steering in Dynamic Mode, the ride in every mode is smooth and quiet, even on the rough Metro Detroit highways. A smooth ride and a quiet cabin is crucial for a non-performance oriented luxury SUV, and the Audi Q7 checks those boxes with some emphasis, but the modern luxury owner also wants a vehicle with great driving dynamics – and the Q7 delivers in that category as well. Once again, this isn’t a vehicle that you are going to take road racing, but the big Audi SUV is fun to drive when cruising along a curvy country road.

Finally, the EPA expects the 2017 Audi Q7 3.0T to deliver fuel economy numbers of 19mpg around town, 25 on the highway and 21 combined. I found on a long highway cruise, I got up around 28mpg and even with some hard driving around town, that yielded an average of 22.3mpg over the course of a week of driving (50/50 mix). There are more fuel efficient luxury SUVs, but none seat seven in a plush cabin and offer the fun-to-drive factor of the Q7.

The Final Word
The 2017 Audi Q7 3.0T isn’t the SUV that you want to buy if your key concerns are monster power or track-ready handling capabilities, but if you want a seven passenger SUV that is fun to drive while also offering all of the premium interior amenities that you demand from a big luxury SUV, this is easily one of the best options on today’s market. The Audi Virtua Cockpit gives the Q7 a unique advantage over many of the competitors, so if you are a big fan of state-of-the-art infotainment features, this is definitely a vehicle that you will want to check out before making your next big purchase. My Audi Q7 test vehicle had a base price of $54,800 while options and fees lifted the final price to $68,925, so while this is as pricy as you would expect a seven passenger luxury SUV to be, it also offers everything that you could want from a plush people hauler and more.

Panasonic Updates Profit Forecast, Noting How Much Tesla Batteries Help The Jump
2022 Porsche 911 GT3 Laps Nurburgring in 7:04 With Journalist Behind The Wheel
END_OF_DOCUMENT_TOKEN_TO_BE_REPLACED