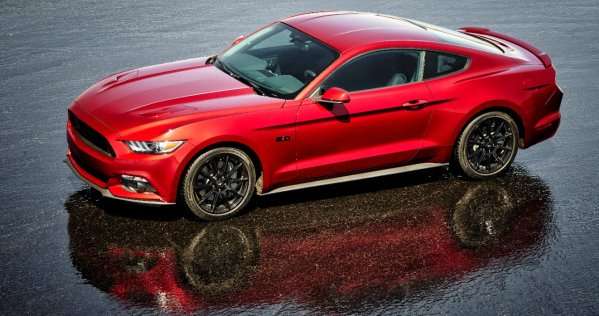 2016 is a big model year for the Ford Mustang, with the first of the next generation Shelby Mustang fastbacks debuting in the form of the new GT350 and GT350R. There is also the introduction of the newest GT California Special, but not just those folks looking to buy a higher priced model. Ford has announced that the 2016 Mustang GT will get a new optional Black Accent Package while the EcoBoost Premium Mustang gets a new Pony Package – both of which are strictly aesthetic upgrades. Also, anyone buying a 2016 Mustang with either the 2.3L EcoBoost or the 5.0L V8 can opt for a new black roof package that is exactly what it sounds like.

“Mustang enthusiasts are not shy about telling us what they want,” said Melanie Banker, Mustang marketing manager, “and we’re constantly exploring ideas together with our engineering team to develop new features we know our customers will love. These new hood vent indicators for the GT model are a perfect example of us communicating customer feedback to Mustang engineers and the team responding with an exclusive new feature for owners of the 2016 Mustang GT.”

2016 Mustang GT Black Accent Package
The new Black Accent Package for the 2016 Ford Mustang GT is on display in the dark metallic red fastback above, but it is also available on 2016 GT convertibles as well. This package adds 19 inch black alloy wheels, a black decklid spoiler, dark tail light trim, black 5.0 logos, black pony badges and all of the normal black trim along the bottom of the car.

There is no pricing available for the 2016 Ford Mustang GT Black Accent Package, but considering that it is really just a wheel upgrade and a collection of painted parts that are usually just a different color – the package shouldn’t be all that expensive. I expect this to be a popular option for the 2016 Mustang GT, although no time frame has been given on this package.

Finally, 2016 Ford Mustang GT and Mustang EcoBoost buyers can opt for a painted black roof option, which hasn’t been available since the previous generation Boss 302. Also, the 2016 Mustang will get a factory over-the-top stripe package in either black or silver, and Ford has stated that these stripes will be available on “most colors and trim packages”.