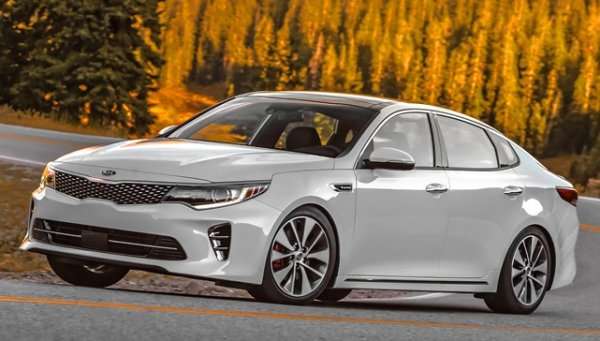 The new 2016 Kia Optima was the subject of a Super Bowl commercial featuring Hollywood tough guy Christopher Walken in which they likened the sporty midsized sedan to a really flashy pair of socks, but after spending a week driving the turbocharged Optima, I feel that they are selling the car a little short – as this car is far better than my favorite socks.
Advertisement

In the Super Bowl commercial named “Walken Closet”, Christopher Walken talks about how some people like beige socks while other people like to stand out with flashier socks. Walken then compares the new 2016 Optima to those flashy socks, suggesting that the midsized sedan segment has traditionally been boring, bland and totally utilitarian – but the Optima stands out in that group of less-than-interesting cars.

In all fairness, the midsized sedan market has come a long way over the past decade, making a clear shift to being more interesting to drive and much nicer on the inside, with the 2016 Optima being a great example of that segment shift. The new Optima has an aggressive exterior, a plush interior and a powerful turbocharged engine that offers solid fuel economy – making the new Optima far more exciting than my favorite flashy socks.

My 2016 Kia Optima SX Turbo was fitted with the “SXT Launch Edition” package that is no longer available on the company build site, but you can get all of the key features of my loaded up test car in the top-of-the-line Optima SX Limited. The SX Limited package carries an MSRP of $35,890, but that comes with literally every feature that you can get in the Optima, while also offering more features than similarly priced competitors in the segment.

The Exterior
On the outside, the 2016 Kia Optima with the SX trimline configuration wears a sporty design, with an aggressive front fascia that is unique to the SX models. This fascia has a large center open flanked by smaller ducts on the outer corners. Above this unique front end is a set of LED-trimmed projection headlights that are connected by an angular grille that is filled with a design that is a little classy and a little sporty. More importantly, these great-looking headlights feature the company’s Dynamic Bending Light system that directs the light from side to side as you steer – a feature which is more commonly found on far more expensive luxury sedans. Along the side, the 2016 Optima SX Launch Edition wore unique wheels that are not offered with the SX Limited, but either wheel option makes for a great looking profile. The overall nose-down rake of the Optima lends itself to a sporty feel while the long roofline and short trunklid area follows the trend set by many high end luxury sport sedans.

Finally, the back end of the Optima SX has a set of unique LED taillights under a subtle molded spoiler design in the trailing edge of the trunk lid. Along the bottom, the Optima SX also gets a unique rear fascia with an integrated diffuser design that really drives home that sport sedan look.

If you put the 2015 and 2016 Kia Optima side by side, you can certainly see the resemblance, but the design changes to the 2016 Optima SX go a long way in making this midsized sedan far sporty than the outgoing models. I liked the direction of the previous Optima, but the look of this 2016 model is a great step in the right direction for a company looking to appeal to younger buyers. While other automakers offer a sport model for their midsized sedans, the Kia Optima only comes sporty when you opt for the more well-appointed trimlines and I applaud the company for this bold new look.

The Interior
While the exterior of the 2016 Optima SX clearly goes for the sporty feel, the interior is a brilliant mix of luxury and sport. The front and rear seats of the Limited package are heated, with a plush embroidered leather providing a very high end look. More importantly, the front seats have soft padding for a comfortable ride and deep bolsters that help keep the driver and front passenger soundly in place during stints of spirited driving. The back seats don’t have the deep bolsters, but they do have a similar padding that are more comfortable and less “park bench-like” than some midsized sedans. The front seats are both heated and cooled, while the rear outboard positions are also heated, as is the sport steering wheel. In addition to the front and rear seats being very comfortable where they meet the body, all four main seating positions offer a solid amount of leg room and head room. The long roofline of the Optima gives it a sportier look from the outside, but it also affords rear passengers more head room while the rear-shifted rear seat opens up some leg room behind the front bucket seats. In terms of front seating space, the Optima has plenty of space for very tall drivers, while the power controls allow smaller drivers to adjust the seat for safe operation. Also, while the Optima front bucket seats have deep bolsters like a sport seat, these seats aren’t as narrow as some sport seats, so drivers with wider hips or shoulders shouldn’t feel squashed into the seat. There is also plenty of leather trim on the center armrest, the door panels and the dashboard, but comfortable seats and plush leather are only a very small part of the Optima’s interior allure.

Whether you find an Optima SX Launch Edition sitting on a lot or you order a new Optima SX Limited, the spread of electronic gadgetry leaves little for buyers to request in the future. The heated sport steering wheel has controls for hands-free phone system, the audio system and the driver information screen mounted between the analog speedometer and tachometer. Between voice controls and the steering wheel buttons, there aren’t many features of the Optima’s infotainment system that you cannot control with both hands on the steering wheel. The heart of the Optima SX infotainment system is an 8 inch touchscreen mounted high on the dash, which gives the driver and front passenger easy access to the sound system, the navigation system and many of the basic vehicle interior settings. Those who don’t like the touchscreen will also enjoy the full spread of buttons and knobs located just below the screen. Unlike some vehicles that force you to work with touch-sensitive controls, the Optima’s setup combines both old and new button technology – plus the voice controls and the buttons on the steering wheel. As part of the Limited package, the Optima SX features a Harmon Kardon premium sound system with 10 speakers and 630 watts of power for plenty of high quality, high volume sound.

One of my favorite features of the high end Optima SX Limited package is the panoramic sunroof, which offers a large open area for the driver and front passenger along with a glass-roof treatment for the folks in the back. A glass roof like this one is either not offered or very expensive with most other cars on the market, but it is a gorgeous standard feature of the Optima SX Limited.

The interior of the 2016 Kia Optima SX Limited is nice enough and loaded enough to compete with the biggest names in the luxury sedan segment – which drives home the fact that the $35k price tag is a bargain compared to similarly equipped sedans. The Optima has a high end infotainment system, a high end sound system, plush front bucket seats and comfortable, heated rear seats – leaving you wanted for very little whether you are driving or seated out back.

The Drive
The 2016 Kia Optima is offered with a trio of engines, but the SX trimlines comes with the standard 2.0L turbocharged 4-cylinder. At one point, the V6 was the way to go if an automaker wanted their midsized sedan to be powerful, but the steady influx of turbocharged engines has led to more and more turbo-4s in this segment. The Optima benefits from the turbo technology, with the 2.0L mill providing 245 horsepower and 260lb-ft of torque, with the power being channeled to the front wheels via a 6-speed automatic transmission. Also standard for the Optima SX is a sport suspension setup and the a drive mode select system, which either stiffens or softens the transmission shifts, the throttle input and the steering feel depending on the mode chosen. Kia has put a great deal of emphasis on the driving dynamics of their vehicles over the past few years and the 2016 Optima SX is a great example of those efforts. The 2.0L turbocharged engine delivers great power across the powerband, with tons of low end torque making this roomy Kia quite peppy off of the line. When you select the “Sport” drive mode, throttle response is significantly sharper and the transmission shifts more aggressive, both of which have a big positive impact on the fun to drive factor. When coupled with the shift paddles on the steering wheel, the Optima SX affords the driver a great deal of shift control, which really bolsters the ability to blast down a twisty road with confidence. The sport suspension minimizes body roll and for a car of this size, the Optima SX is surprisingly nimble in tight quarters. Also, the steering feel is stiffened up in sport mode to give the driver a bit more feedback, although you don’t have the same feeling that you do with a full-fledged sports car. The Kia Optima SX packs big fun to drive factor, but in the midsized sedan segment, ride quality is every bit as important as sportiness. Fortunately, the sport suspension balances handling and ride quality very nicely, so while the driver will enjoy pushing the car through the corners – the bumps and imperfections in the road surface are kept out of the cabin.

Finally, we have fuel economy numbers. With official EPA figures of 22mpg around town, 32mpg on the highway and 25mpg combined, the Optima SX isn’t the most efficient car in the segment – but these expected figures are very realistic during real world driving. I admit that I had a bit of a heavy foot while driving the turbocharged Kia and as a result, I averaged 23.9mpg..a skosh under the EPA number of 25mpg combined. However, when on a longer highway trip, the 32mpg figure is very achievable when you are cruising the open road.

The Kia Optima SX uses turbo technology to combine solid power levels with equally solid fuel economy figures in a car that is fun to drive and comfortable for everyone. This car is perfect for someone who wants a fuel-friendly midsized sedan that will cut through the corners and zip away from a stop with some urgency. The Final Word
In the automotive world, midsized sedans have become the socks – serving as something that everyone needs, but not everyone expects to enjoy. The Kia Optima SX bucks that boring sedan stigma with a plush, loaded cabin, an aggressive exterior and a drivetrain that is both spirited and fuel efficient. Comparing the Optima SX to a pair of flashy socks sells the car a bit short, as this car is anything but boring whether you are seated in the driver’s seat or the back seat.